How Arkansas's new distracted driving law will affect you

Distracted driving is a clear and present danger and now that a new Arkansas law has kicked in it’s clear how seriously police will be fighting to stop it. 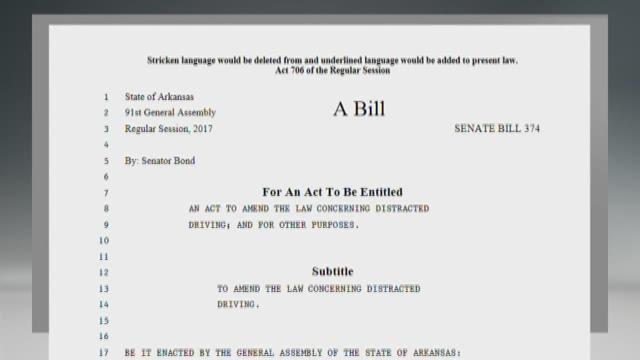 LITTLE ROCK, Ark. (KTHV) - Distracted driving is a clear and present danger and now that a new Arkansas law has kicked in it’s clear how seriously police will be fighting to stop it.

The problem has been technology has moved quickly and texting and social media can be hard to resist. So, lawmakers wanted to make updates and police are adjusting as well.

“We all think that we can look at a text and drive or look at our Facebook page and drive,” said State Senator Will Bond (D - Little Rock), who sponsored the bill this past legislative session that became Act 706. “In reality we can't. It's very very dangerous.”

Sergeant Quinton Jackson of the Benton Police Department is glad for the action from the state capitol.

“It's become a problem over the years,” Jackson said. “I think the thing is sometimes our laws take a little time to catch up with the technology that we have.”

Arkansas has had several laws in place dealing with calling and texting while driving, but they were eight years old. That's a long time in the tech world.

“We wanted to clarify the laws that were on the books,” Bond said. “I felt like it was unclear exactly what you could and could not do on your phone while driving.”

So, now it's clear. Dialing a phone is okay, but texting is forbidden and typing and posting to social media counts as texting.

Importantly, the new act toughens up the penalties, pushing the fine up to a maximum $250 for a first offense. Judges have the ability to double fines if texting causes a wreck or takes place in a prohibited zone.

That initial penalty is jarring to many, but Bond said it's important and needed.

“There's actually a lot of leeway and that was intentionally put in there by the legislature to give the judges more leeway, but also to stress this is a serious offense,” he said.

We talked with other departments and places like Bryant and North Little Rock have been focusing on this for a few years.

Bond noted that there are about a dozen states with stricter laws on the books. He didn't think Arkansas would join them in the near future, but he thinks his fellow lawmakers need to revisit the topic regularly.