The eastbound lanes over the I-40 Hernando de Soto bridge in Memphis reopened to limited traffic about 9:30 p.m. Saturday. 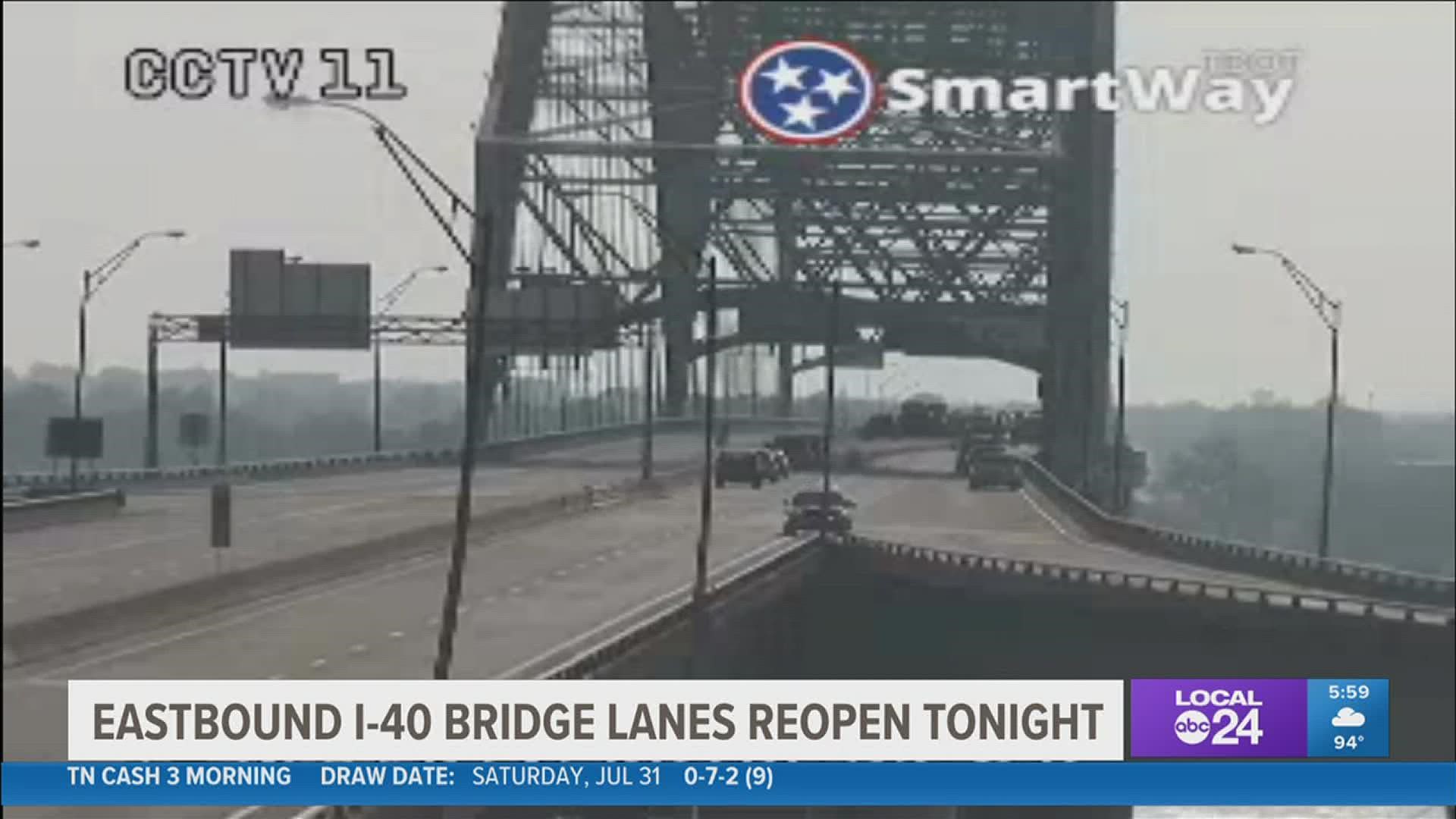 MEMPHIS, Tenn. — UPDATE 7/31/2021 - The I-40 Hernando de Soto bridge is once again open over the Mississippi River - at least the eastbound lanes are.

Cleanup continued and crews restriped lanes Saturday as they prepared to reopen the bridge Saturday night.

TDOT said all eastbound lanes were reopened about 9:30 p.m. Saturday, and the plan is for westbound lanes to reopen on Friday, August 6, barring any complications.

TDOT said it is possible the westbound lanes could reopen before next Friday.

I-40 EB lanes on the Hernando DeSoto bridge is OPEN! pic.twitter.com/2xo4yv5F56

Lots of things taking place today and one of them is re-striping while clean up and removal of equipment continues. #ItsAProcess #Memphis #i40msriverbridge pic.twitter.com/ZvejvATR00

7/30/2021 -  The Tennessee Department of Transportation said Friday that the contractor is ahead of schedule and the eastbound lanes of the I-40 Hernando de Soto bridge will now reopen Saturday night.

Currently, cleanup is underway on the bridge as crews prepare to reopen it to limited traffic.

TDOT said it is possible the westbound lanes could reopen before next Friday. This is all barring any complications.

7/28/2021: The Tennessee Department of Transportation said Wednesday morning that the I-40 Hernando de Soto bridge will reopen to limited traffic while contractors finish the repairs.

Load testing began Wednesday morning on the bridge over the Mississippi River in Memphis.

Load testing of the I-40 Hernando DeSoto bridge is underway! #i40msriverbridge #memphis pic.twitter.com/Iq53Ty7HV1

Read the latest release from TDOT below:

Tennessee Department of Transportation Commissioner Clay Bright announced today the I-40 Hernando DeSoto Bridge over the Mississippi River will reopen under limited traffic while contractors finish the work.

Contractors will have completed all the phase three plating by Friday. They will begin to demobilize, break down platforms, remove equipment and barriers starting with the eastbound direction. They will do this one side at a time as it is the safest scenario for the workers.

*Please note this schedule is barring any complications. We will put out another update on Friday, July 30th.*

The bridge remains an active work zone. We ask motorists to pay attention to the interstate DMS, portable message boards, and SmartWay for specific traffic information.

“We know having the bridge closed has been incredibly inconvenient,” said TDOT Commissioner Clay Bright. “We appreciate the public’s patience while our team made the repairs and performed extensive inspections to ensure it’s structurally sound for many years to come.”

The emergency bridge repair project was awarded to Kiewit Infrastructure Group. The selection was based on qualifications, experience, and availability of personnel and equipment. Other partners included FHWA, TDOT’s consultant Michael Baker, Inc. (MBI), and ArDOT’s consultant HNTB.

“Back in May, we speculated that it would be the end of July, first of August to work through all the phases needed to reopen the bridge,” said Commissioner Bright. “We did not know then what all would be involved, but what I do know is we have all been fortunate to have had a great team that personally took on this project and worked tirelessly to safely reopen the bridge as soon as possible.”

TDOT shares responsibility for the bridge with the Arkansas Department of Transportation. ArDOT handles the inspections, TDOT the repairs. On May 11th, an ArDOT contractor discovered a crack in the bottom side of the bridge truss during a routine inspection and immediately shut down the bridge.

We have a webpage dedicated to the bridge repair: https://www.tn.gov/tdot/projects/region-4/i-40-hernando-desoto-bridge.html. You can also follow @myTDOT on social media for the latest.

The Tennessee Department of Transportation confirmed that it has an opening plan for the I-40 bridge and is expected to make the official announcement Wednesday.

Tuesday afternoon, we spoke with West Memphis Mayor Marco McClendon who said he is confident an announcement could come as soon as tomorrow morning. 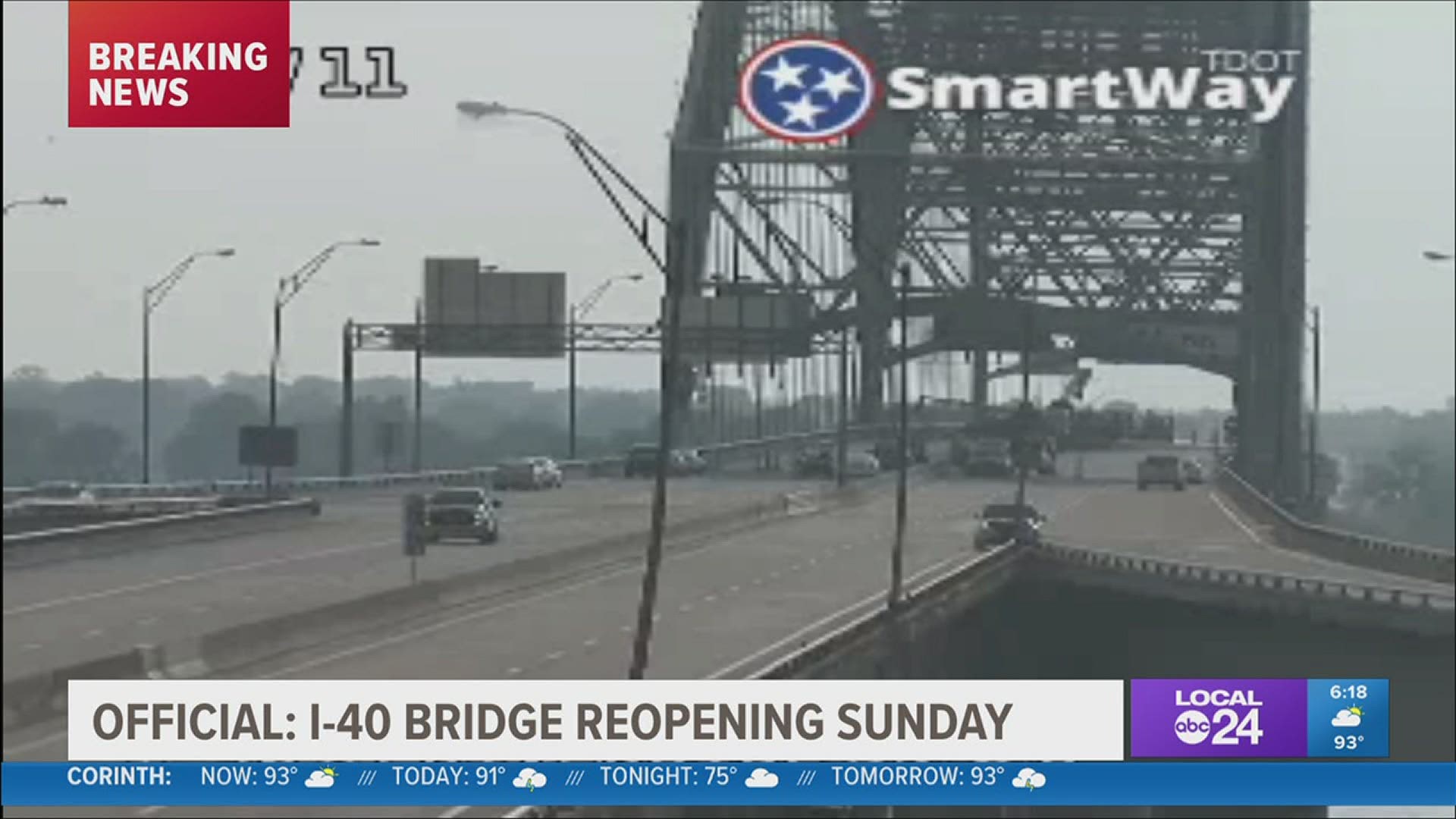