“These are angry, defiant, violent people that we housed at the justice center," public safety director Jimmie Edwards said 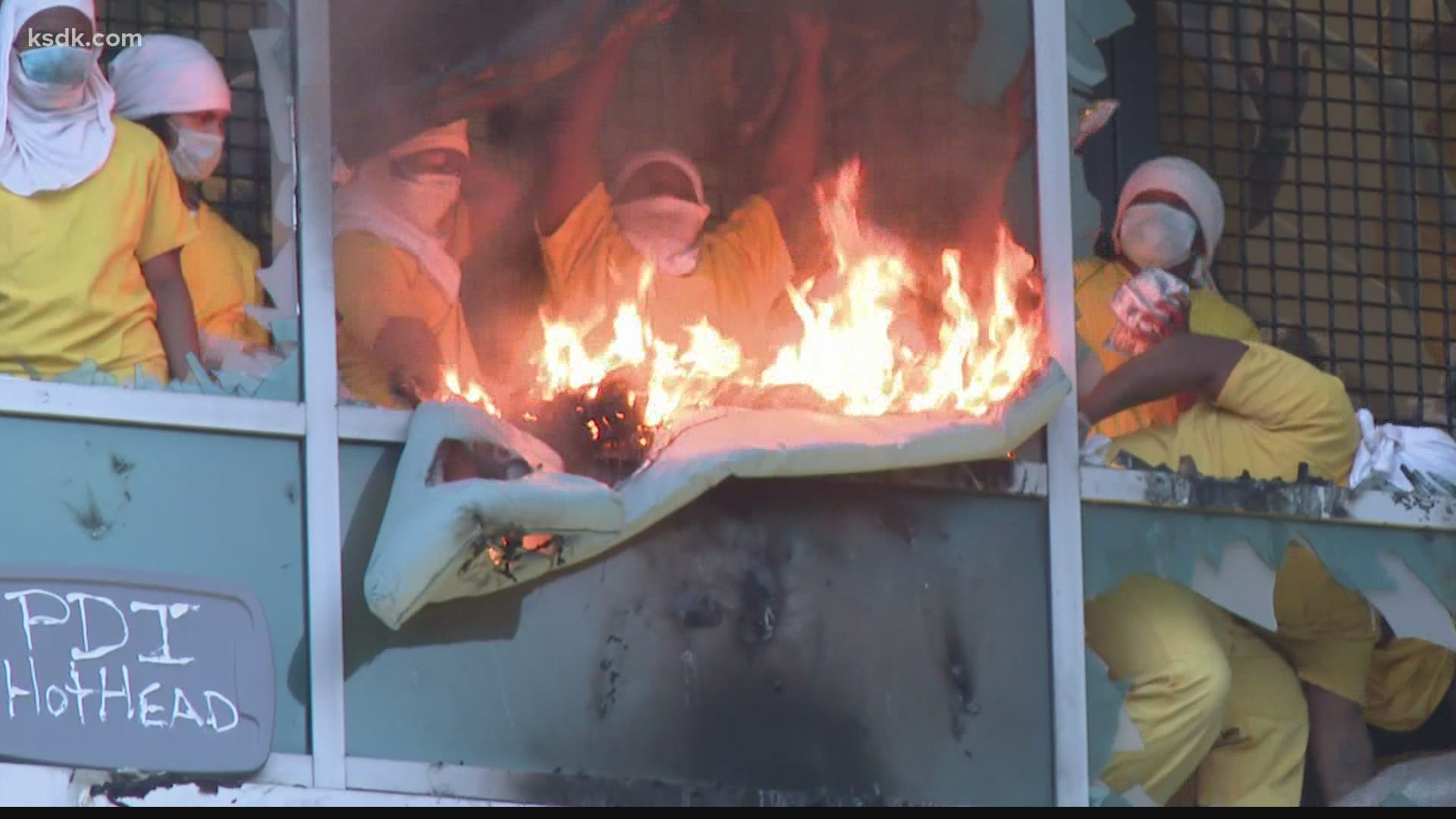 As of 10:15 a.m., the situation was under control, according to St. Louis Public Safety Director Jimmie Edwards.

The inmates had broken several windows on an upper floor. They chanted and held signs. Several things were also set on fire and thrown out of the windows. Chairs and other items littered the street below the windows, and at least one car had a shattered windshield.

Edwards held a press conference at 10:15 a.m. with an update on the situation.

At around 2:30 this morning, a corrections officer got into a scuffle with a detainee on a fourth-floor unit and was then jumped by other detainees, Edwards said. The detainees had been able to “jimmy their locks” and the locks don’t necessarily lock, he said.

“Even though our automated P.A. system would indicate that the cells are locked, they are in fact not locked and so other detainees were able to get out of their cells and into the unit,” he said.

That corrections officer was able to get out of the unit, which was also locked. He was taken to the hospital. Edwards said he believes the officer is "doing well at this time."

Inmates then had access to a panel which they used to release other detainees into the unit. The detainees were able to get into the hallway and into a second unit that was then breached, Edwards said.

He reiterated that the incident was not any type of hostage situation. He said no detainees were hurt. Once officers entered the unit to break up the uprising, all of the detainees complied, Edwards said.

“These are angry, defiant, violent people that we housed at the justice center. There is no one housed for misdemeanor, municipal offense or a low-level felony. These are assaults on a police officer, homicide, things of that sort -- very, very violent men that are housed in these two units,” Edwards said.

The units have since been cleared and Edwards said they have moved 55 of the men to the segregation unit, which has a maximum security locking system, and 65 of the most violent offenders to the Medium Security Institution, which is a more secure facility.

Edwards said he hopes charges may be filed on Saturday. "We know exactly the people that were involved. We know the people that set the fires. We have lots of surveillance and we're going to be able to take a look at that."

Of the fourth floor, only one of four units is now usable, Edwards said. They hope to have the damaged units usable again within the next three to four weeks.

Edwards also said there are no COVID-19 positive detainees at the justice center.

Watch the full press conference below:

Fires are still being started. The fire department is trying to extinguish them. pic.twitter.com/5tlAopjyWr

"Very dangerous and violent situation this morning at the City Justice Center," Krewson said on Twitter later Saturday morning. "I’m grateful to hear that our corrections officer who was attacked and sent to the hospital will be okay. All those involved remain in custody with some being transferred.

This is the third incident reported at the justice center since late December. Last month, A group of detainees being held at the St. Louis Justice Center was transferred to the Medium Security Institution after refusing to return to their cells.

"There is yet another uprising inside of CJC because the people being detained are being forces to live in inhumane conditions. Remember last week when Dale Glass said everything is fine in the jail and everyone is being treated well."

CloseTheWorkhouse is the campaign working to get the center closed.

According to the city's website, there are currently 758 inmates at the justice center.

Following the revolt, Missouri Representative Rasheen Aldridge condemned the treatment of inmates at the center and said in a statement posted to Twitter that he would seek answers as to why inmates' concerns still have not been heard despite recent uprisings.

"What MLK said was true when he talked about riots being the language of the unheard, The inmates have been ignored for 2 months, how much longer will they go unheard?" the statement said in part.

My statement on the incident at the City Justice Center this morning.

I promise that I will use my position as the top Democrat on The House Committee on Corrections to get answers on why it is taking 3 uprisings from inmates to have their concerns heard pic.twitter.com/mDRVbop7w2

"The incident this morning at the City Justice Center (CJC) is an indictment of our entire criminal justice system -- a system that has inhumanely housed inmates and prisoners in the midst of a global pandemic without the necessary supplies to keep themselves safe," she said in part.

Statement from Board of Aldermen President Lewis Reed:

"First and foremost, I am mostly concerned about the safety and security of the staff and inmates in the building. Hopefully they can utilize the additional space at MSI (medium security institution) to help diffuse the situation."

"Saturday’s protest at the City Justice Center was shocking. I call for a full and thorough investigation into what led to the disturbance; and an immediate course of action to improve security at CJC.

Something is terribly wrong when we have multiple incidents in just a few weeks. Additionally, we owe all people held in custody humane treatment and proper protective equipment in this pandemic environment."

This is a developing story. It will be updated as more information becomes available.