MEMS hopes change in strategy can save more lives

LITTLE ROCK, Ark. (KTHV) -- Cardiac arrest patients have much better odds of recovering, thanks to a change in strategy at MEMS.  Now paramedics want the public’s help to make those odds even higher. 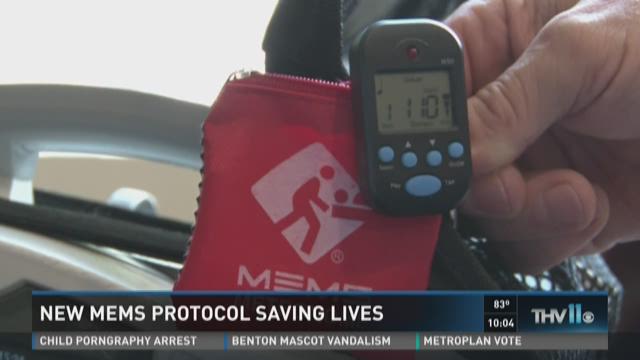 LITTLE ROCK, Ark. (KTHV) -- Cardiac arrest patients have much better odds of recovering, thanks to a change in strategy at MEMS. Now paramedics want the public’s help to make those odds even higher.

“Cardiac arrest is a very serious emergency, and something that paramedics train specifically to address,” said MEMS Executive Director Jon Swanson. “But the key to that is to be able to sustain a person from the moment that incident starts. And that’s where the CPR comes in that’s so important.”

And now paramedics are putting that training to use as quick as possible. In November, MEMS changed its protocol for treating people who are in cardiac arrest. Instead of taking the patient to the hospital, paramedics start CPR and attempt to get the patient’s heart back in rhythm on location.

“That entire chain, if it’s broken at any place, jeopardizes a patient’s chances of surviving,” Swanson explained, “and surviving in good shape is our goal.”

When MEMS made the switch in protocol, its success rate in reestablishing spontaneous circulation in patients quickly jumped from 16 percent to 37 percent. But according to Swanson, that number has leveled off. “We want to see that even go much higher, and give that many more people a chance to make it home in good shape,” he said.

A 9-1-1 dispatcher recently had to talk a group of people through CPR, so they could save a man who went into cardiac arrest on the Big Dam Bridge. He has recovered well, in large part because the dispatcher figured out what was wrong and told the caller what to do.

“The call did not come in as a cardiac arrest, it came in as something else,” Swanson noted. “And the dispatcher recognized that it was something else and directed that CPR begin immediately.”

Swanson is promoting free CPR classes that MEMS teaches. Paramedics will visit with groups as large as 30 people, and the course runs two to three hours. “For folks who may be uncertain, or uncomfortable doing it, going through the training is one way to help people overcome that,” he mentioned.

Among the topics covered are the right way to give chest compressions, how to use an automated external defibrillator (AED), and why not to use mouth-to-mouth resuscitation.

“Interruptions in CPR to do the rescue breathing causes the blood momentum that’s been built up to then slow down again, and the real need is to continue to profuse the brain, to make sure that oxygen is reaching the brain.”

Another way to increase a patient’s chance of survival is to make sure people know where AEDs are located.

“So it’s sad, but it happens that there may be an AED in the bank building next door,” Swanson said. “And so a system that we’re working on that’ll help register the location of AEDs, so the 911 system—and we’re developing this—we have some information that helps us catalogue these, but to expand that further.”