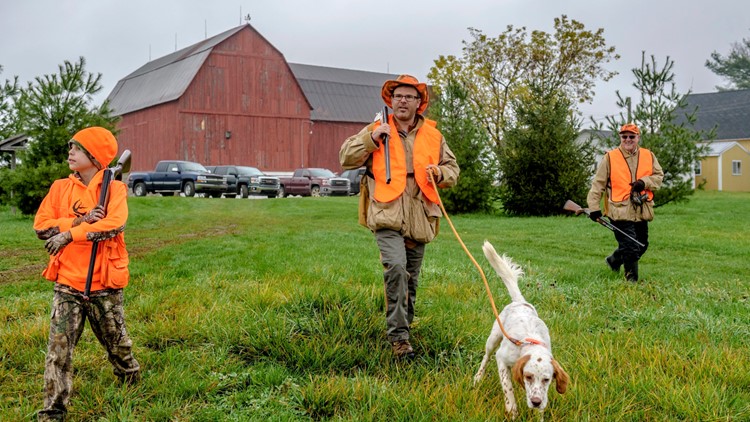 Photo by: AP
Nicholas, Brian, Gus, and Brian's dad, Gary, make their way towards the field while hunting at The Pheasant Farm in Grand Rapids on Sunday, Nov. 5, 2017. Hunting wildlife has long been ingrained in Michigan's culture, but it is currently on a decline across the state. (Nic Antaya/The Grand Rapids Press via AP)

Michigan sees a decline in hunting licenses across the state

GRAND RAPIDS, Mich. (AP) — Hunting wildlife has long been ingrained in Michigan's culture, but it is currently on a decline across the state as young adults opt to participate in other activities.

The decline is partly due to more baby boomers aging out. But young adults, urbanites and others are also far less likely to partake in hunting.

Fishing also is on a downward trend, though its drop has been less steep. Between 2013 and 2018, Michigan residents obtaining fishing licenses fell 5% compared to a 18% decline in hunting licenses during that same period.

Dan Eichinger, director of the Michigan Department of Natural Resources, said resolving the situation doesn't hinge on one thing.

"We've all been beneficiaries of having really strong, robust, active and engaged hunting and fishing communities in Michigan," Eichinger said. "As the number of people who participate in those sports decline, we've got a real difficult question that we're going to have to contend with, not just in our state but across the county."

The decline in hunting and fishing has an impact on the state's conservation efforts, according to Department of Natural Resources officials.

"I mean, $11 billion is a big deal," Eichinger said. As it shrinks, "it's going to disproportionately impact communities in northern Michigan and the Upper Peninsula" that depend on hunting- and fishing-related tourism.

It is particularly vital in urban and suburban areas where deer and coyotes can cause issues. In 2018, deer accounted for one of every six vehicle accidents in Michigan — more than 53,000 collisions, including 14 deaths.