Making your way through TSA and arriving to your gate in less than an hour at the Little Rock National Airport could soon come to an end. 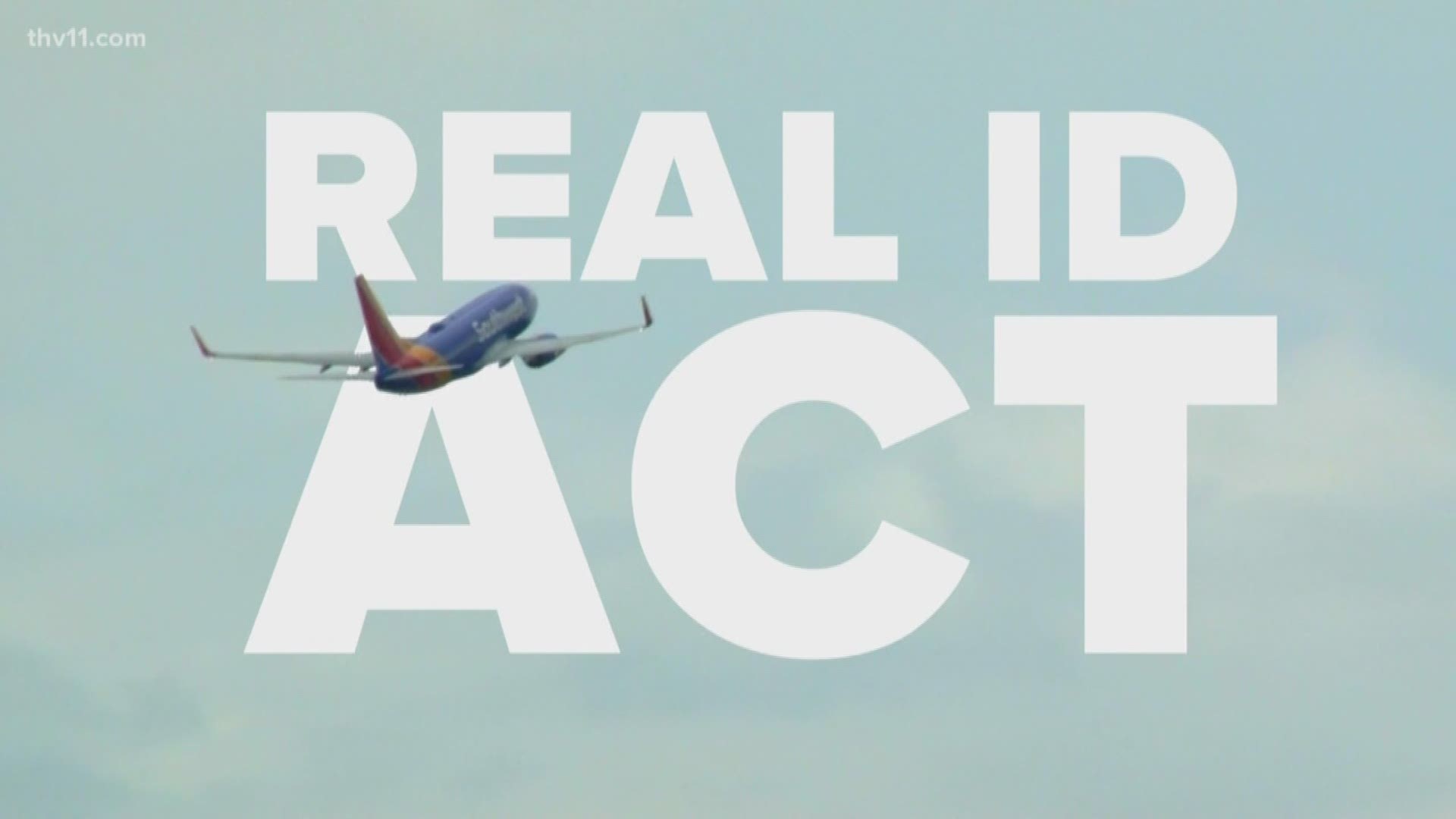 LITTLE ROCK, Ark. — We are eight months away from a new normal when it comes to identifying ourselves.

Starting Oct. 1, everyone must have a Real ID to travel, go into a courthouse or onto any military base.

Making your way through TSA and arriving to your gate in less than an hour at the Little Rock National Airport could soon come to an end.

On the Oct. 1st deadline, all passengers 18 and older will need a Real ID to travel.

In 2005, Congress passed the Real ID Act, a federal law to make driver's licenses more secure. The upgrade is signified with a gold star in the upper right-hand corner of the card.

“Beginning October 1, in order to board a flight, in order to walk into a federal courthouse or a military base, you will have to have a federal issued ID, what we’re calling the Real ID,” said Scott Hardin with the Department of Finance and Administration.

Signs at Clinton National and airports across the country are already encouraging passengers to make the switch.

Arkansas began issuing the Real ID in October of 2016.

Since that time, about 280,000 Arkansans have obtained one.

“Which sounds like a significant number, however, that’s about 12% of active licenses and IDs in the state. We know there’s a much larger percentage of Arkansans that are going to be flying, going to be in and out of a federal courthouse, so we really want to see that number grow,” Hardin said.

Travelers like Dennis know time is winding down as the deadline approaches.

The last thing he wants to see happen is to miss his vacation because he didn’t get the updated identification card.

“I’m a pre-check guy so I think if you have your passport and you don’t have that star, you get through, is what I’ve been told… but I don’t carry my passport all the time when I travel,” Dennis said.

And that could be a problem.

In some states, it’s a requirement. But here in Arkansas, it will remain optional, meaning you can still use your passport if you choose.

A THV11 viewer asked 11Listens: “Can we use our concealed weapons permit as legal ID at TSA?” We took that question directly to Hardin.

“The federal government has said that a weapons permit will not qualify to allow you to board that aircraft. So, the answer there is no.”

If there's one thing for sure, it's that there’s been some confusion when it comes to what you’ll need to do to get your Real ID.

Hardin says you’ll have two options when you go into any of the state’s 134 revenue office locations.

You can either transfer your existing expiration date on your license to a Real ID for ten dollars or get a Real ID that would initiate a new term of eight years for forty dollars.

It’s important that you bring all the required documents to obtain the upgrade.

Travel officials fear millions of Americans may not have the new ID to go through security when requirements go into effect. Several members of Congress recently sent a letter to the Department of Homeland Security asking for contingency plans so people don’t show up to the airport and get turned away after the October 1 deadline.

Remember, when you have a question about something where you live, we want to hear from you. Email 11listens@thv11.com or reach out to Marlisa on Facebook or Twitter.

RELATED: What are those electrical boxes in West Little Rock? | 11 Listens

RELATED: Is it illegal to put your dog in the bed of a truck? | 11 Listens

RELATED: Yes, dentists can offer Botox but not for what you might think | 11 Listens