Oct. 5 is the 10th anniversary of the Out Of the Darkness Walk in Little Rock. The walk aims to shed light on suicide in hopes of saving a life. 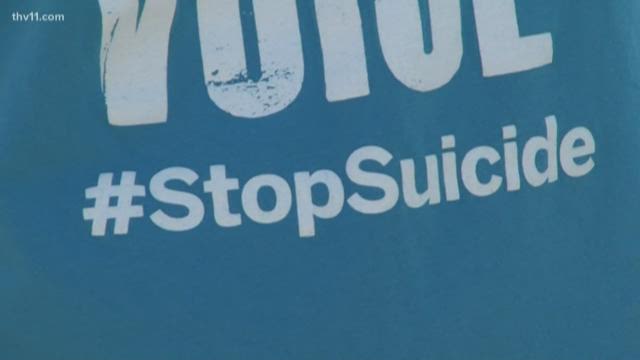 LITTLE ROCK, Ark. (KTHV) – There is no doubt suicide is a problem in Arkansas as it is the 10th leading cause of death among Arkansans.

According to the American Foundation for Suicide Prevention, Arkansas ranks 10th in the nation for suicide rates. In 2015, 577 people died from suicide.

Sunday is the tenth anniversary of the Out Of the Darkness Walk in Little Rock. The walk aims to shed light on suicide in hopes of saving a life.

"You need to know that you're not alone, that there are other people that can be there to support you,” AFSP’s Wendy Thompson said.

Thomson lost her father to suicide when she was 13.

“I didn't really have an opportunity to go through a healing process,” Thompson said.

But when she found the American Foundation for Suicide Prevention, that changed.

"When I got involved, I wanted to do something more. So, I got together with some of my friends and we decided to bring the first Out Of the Darkness Walk here to Arkansas, and that was 10 years ago,” she said. “There were about 400 people that came out that very first walk. So, we knew there was a need and people want to talk about it.”

The walk has since become a huge success in Arkansas and has brought thousands together.

"Coming to the first walk was really life altering because it was the first time I didn't feel alone. I could talk about my dad again,” Thompson said.

Tyler West, with the American Foundation for Suicide Prevention, said nearly three thousand people are expected to come out this year.

"This walk is about the same size walk as the STL walk or the San Diego walk. Whenever we travel the country and people ask us what are we doing? It's just Arkansans taking care of Arkansans,” West said.

West also lost a loved one to suicide in 2005, prompting him to join in on the walk.

"Whenever you're walking side by side it may be a stranger, that's walking next to you and you know what they've been through and they know what you've been through, and that's a unique bond,” West said.

Both Thompson and West hope Sunday will make more Arkansans aware they are not alone. The walk also raises money to provide programs, trainings and support to thousands of Arkansans.

"Suicide is preventable and there are a lot of things that we can do to prevent suicide. So, it really is going to take the whole community to get involved to see change,” Thompson said.

The walk will take place at Dickey-Stephens Park in North Little Rock from 2:15 -4:30 p.m. The walk is three miles long. To sign-up or to donate, click here.

If you are someone you know is struggling with suicide, reach out to the National Suicide Prevention Lifeline at 1-800-273-TALK.