588 out of the 964 homeless population in Faulkner County are children, according to last year's census. 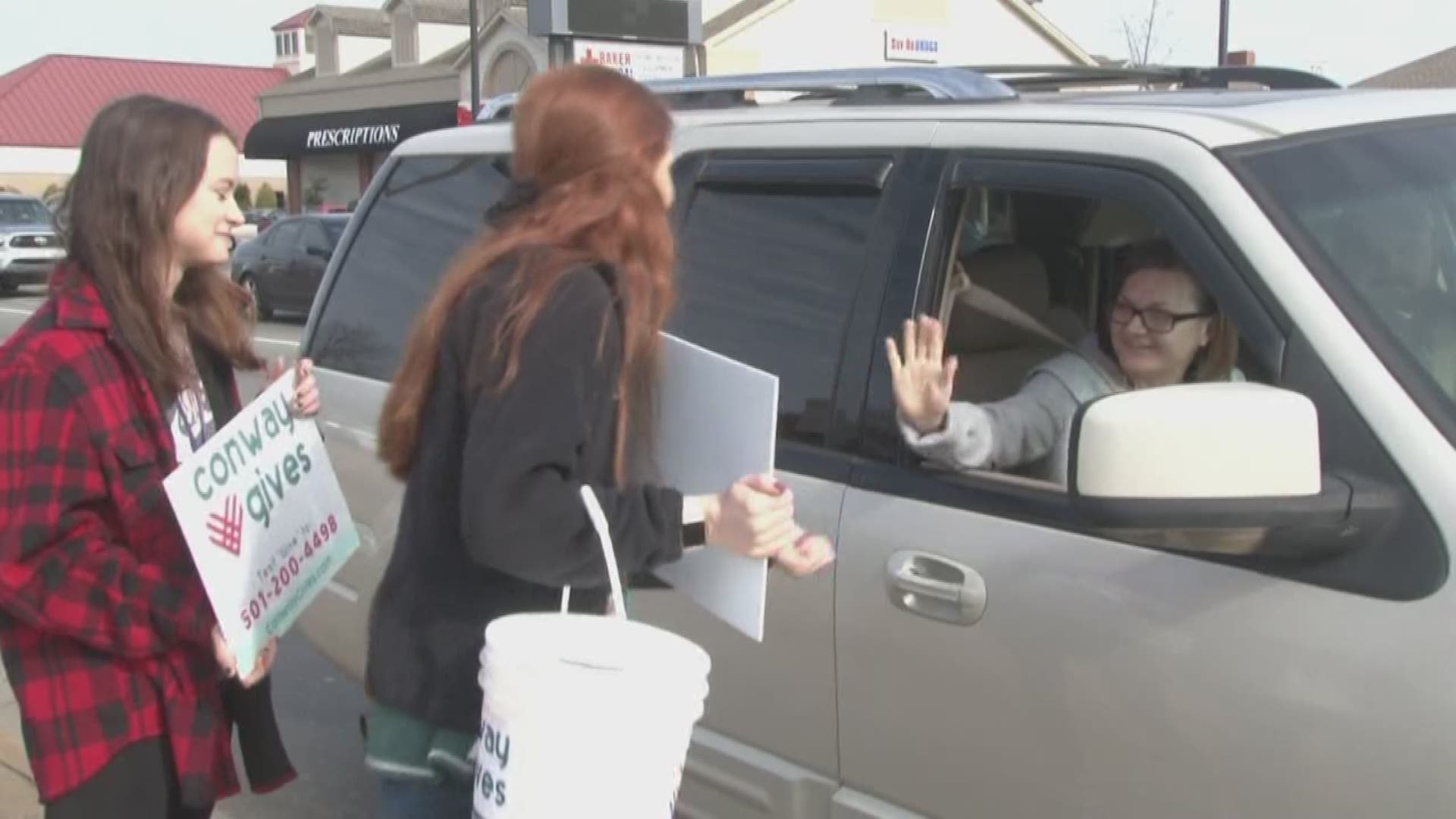 CONWAY, Ark. — Agencies in Faulkner County have searched for better ways to help the homeless population. They have started working together behind-the-scenes, but on Tuesday, their partnership was very visible.

As part of Giving Tuesday, the Faulkner County Homeless Coalition had approximately 100 volunteers at the intersection of Harkrider and Oak streets collecting money for its Conway Gives campaign.

“Last year, it was a lot of change in those buckets,” Laura King, the campaign’s manager, said, “and this year, it’s actually some of the green stuff, a little more, so we’re excited about that.”

“Conway is like a big, little city,” King explained, “and so you’re always kind of tapping on the same shoulders. And so, one thing we know is that working together, we can do more than working separately. And so, by pooling their resources together and helping launch the campaign, it’s educating more people in the community about what homelessness looks like in Conway.

King said Conway’s homeless population may not be as visible as they are in some bigger cities. During last year’s point-in-time census, Faulkner County was home to 964 homeless people.

“Five hundred and eighty-eight of those counted were children,” King added. “And so, homelessness here doesn’t look like that picture you always have of, just, maybe a guy standing on the street, holding a sign. It’s the kids that are in our school districts.”

Giving Tuesday is a global movement in response to Black Friday and Cyber Monday. Instead of spending money on gifts, people are encouraged to give money to their favorite charities. Most use email and social media to ask for donations, but the organizers of Conway Gives thought, being a relatively new endeavor, having people on the street would make a larger impact.

King said she hoped the symbolism of volunteer panhandlers asking for donations on a December day would drive home the need for resources for the homeless, for both the donors and the volunteers.

“It’s easy to see someone standing on the street and make a quick judgment as to, maybe they’re taking the easy way out,” she stated. “Or, the common thing to hear is they just need to get out and get a job. But there’s so much more to it than that, you know? Do they have a driver’s license? Are they able to take a shower? All of the things that they need to be able to even get a job.

“And so, one, it’s a way to educate. And one thing we hear a lot from people that actually just stand outside for an hour holding that sign is: this is so much harder than it looks. And so, it’s a great way to just have empathy, you know, and compassion for your fellow man.”

Lots of drivers passed through one of Conway’s busiest intersections, and volunteers on each corner collected a steady stream of donations. King said the group hoped to raise more than $2,500 during the day.

Conway Gives is a year-round campaign, however, so she also hoped that a positive experience giving to a panhandler would make people more willing to support the organizations that help homeless people find jobs, housing, and new lives.

“It’s a way to bring the whole community together around—sometimes—a subject that’s really difficult and divisive,” she said, “and we’re trying to take that out of it so that everybody can come to the table.”

The national Giving Tuesday organization picked Conway Gives as one of its featured campaigns. It also connected Conway Gives with a similar group in Chicago so they could work together to raise even more money.

“If Giving Tuesday didn’t exist and hadn’t been doing what they’ve been doing all over the world, basically, we wouldn’t be doing this today,” King stated.

“And so, it’s really impacted our ability to work together to raise money together.”