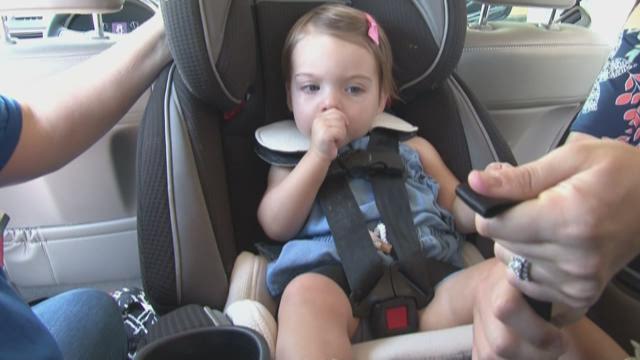 LITTLE ROCK, Ark. (KTHV) - Being a parent can be fun, exciting, challenging and confusing. While safety is a parent’s top concern, the International Association for Child Safety said up to 90 percent of parents aren't installing their child’s car seat properly.

Maury Long, an Injury Prevention Specialist at Arkansas Children’s Hospital, said a lot of parents don't get the appropriate information they need to properly secure their child in the car seat. He said some mistakes can range from minor issues to something that could be a major issue in a motor vehicle crash.

Long served as a paramedic for years before joining ACH. He was inspired to take the job after witnessing numerous car seat mistakes. One of them involved a 2-month-old who died in a motor vehicle crash. The child was in a forward-facing seat in the front seat of the car.

While there was very little damage to the car, the misuse of the car seat broke the child’s neck in the crash which led to the child’s death.

“This is something that may never have happened if the car seat was installed correctly,” said Long.

Now, Long and Holly Terry, the Program Manager for the State Child Passenger Safety program, are hoping to educate more Arkansans about proper car seat use.

Terry said there are three common things that people do wrong when it comes to car seats. The biggest issue is people are not using them at all. The other issue is installing them incorrectly. The third is incorrect harnessing. Those are only some of the common errors.

“Some people don’t realize that car seats have expiration dates,” said Terry. “That means grandma digging that car seat out of the attic for the new grand-baby is likely not okay.”

She said parents need to make sure their child has the right car seat for their child’s age and weight. They should also know how long the child should stay in the car seat or booster seat.

Current recommendations suggest children should stay in some type of child restraint until they are 4’9”, 8-years-old, or 80 pounds. However, that's just a recommendation. Terry said her son needed to be in a booster seat until he was 13-years-old.

There are steps parents can take to make sure their children are ready to move out of a car seat. Terry said parents should make sure that the seat belt buckle sits right at the center of their chest and rests comfortably on their child’s shoulder.

Parents should have their children put their thumbs on their hip bones to make sure the lap part of the belt is positioned under the waist. And if those benchmarks aren’t met, it’s probably not the time to take your child out of a car seat.

Terry also mentioned the recommendations for car seat usage change as new information becomes available, so it’s important for parents to regularly check for changes and updates. Both Terry and Long said the only way to be sure your car seat is being used correctly is to check with a certified child passenger safety technician.

If you are interested in having a certified technician check your car seat, join THV11 for our “Helping Home Event” on Thursday, July 13 from 3 to 6 p.m. at St. Mark Baptist Church in Little Rock. There will be certified specialists on site checking car seats for free.

If you can’t make the event, you can call a certified child passenger safety technician near you to schedule a check. More contact information for various technicians that are available in the state can be found here.