Two businesses. One is over a 100-years-old, the other is barely 6-months-old. But you put them together and you get an exercise in gratitude that we think you’ll want to be a part of. 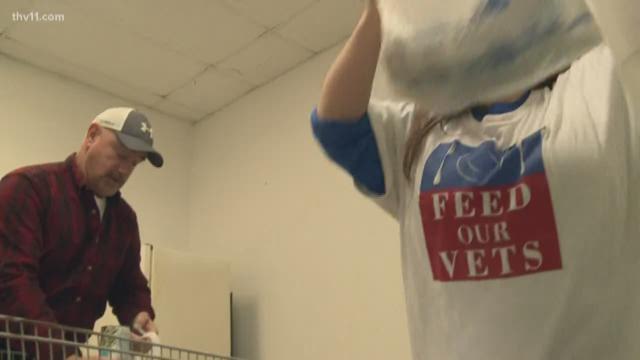 LITTLE ROCK, Ark. (KTHV) — Since 1911 Snell Prosthetic and Orthotic Laboratory has used the latest technologies to produce artificial limbs for people who have suffered a loss.

This includes one special group, Arkansas veterans. Frank Snell, the president of the company, has witnessed how tough a veteran's transition can be.

“The ordinary amputee is dealing with the loss of a limb. The emotional and the spousal support. The acceptance by their children. By their community trying to fit back in and find their place in our world,” Frank said.

A few miles away Deyonka Hickey is a veteran who works at the VA hospital. She sees the same thing and it is not just in veterans with lost limbs.

“They just have a hard time adjusting. They had battles on the battlefield but they also have them in civilian life,” Hickey said.

A year ago she came up with an idea for a food pantry devoted exclusively to veterans. She joined forces with her friend Joyce Short and then she went on the radio to tell the public about her idea.

“People just started contacting me and wanting to donate and do this and then we had a lady donate some space to us just so we could get started,” she said.

They started in March and fed three veterans families. And last month, they served 31 veterans and gave out 1,900 pounds of food. At Snell, they understand the need that exists and its impact.

“The special love of giving food to a family of a veteran is a very meaningful thing,” Frank said.

It's why Snell has been collecting food for Thanksgiving and have joined with us for a special food for veterans collection at the Kroger in Jacksonville on Nov. 17. Hickey said it would be great if they could provide food for our veterans for the holidays and not only for Thanksgiving but possibly care over to Christmas.

Joyce Short saw something at the food pantry when a veteran and his daughter walked in that she’ll never forget.

“His 7-year-old daughter looked around the corner and looked at all the stuff on the shelf and looked at her dad and said ‘We need to go Dad. We can't afford to pay for this.’ And both Deyonka and I heard it at the same time we both said at the exact same time, ‘Your dad has already paid for it, you get whatever you want,’” Short said.

And because the veterans have already paid, we will strive to deliver.

There is a THV11 Helping Home event from 3 p.m. to 7 p.m. Friday, Nov. 17 at the Kroger in Jacksonville. Craig O'Neill and the team will be there. For more details, click here.