Ace Glass reports 1.8 million pounds of glass have been recycled since April 1 at public bins or through paid pickup service. 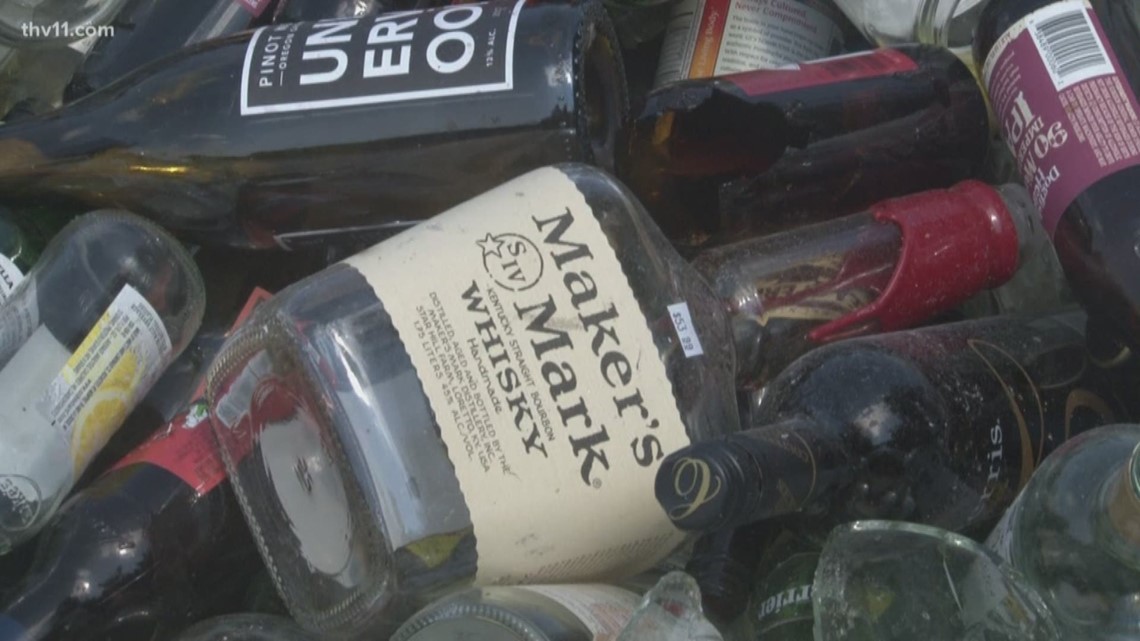 LITTLE ROCK, Ark. — It may be more challenging, or more expensive, for most people to recycle glass in Pulaski County since the county’s recycling program stopped accepting glass in curbside bins. But in the months since then, people have recycled in record numbers.

“We’ve collected 1.8 million pounds of glass in six months from these areas, and that is going back into (the manufacturing) stream,” Ace Glass CEO Courtney Little said Monday. “You think, Little Rock used to do somewhere around 120,000 pounds a year, so we’re already 15 times what we used to collect, in a six-month period. So, you think over the year we’ll collect roughly 30 times what we used to, just on the current program.”

The cities of Little Rock, North Little Rock, Maumelle, Sherwood, and Jacksonville each have public drop-off locations, as do five Edwards Food Stores and a handful of other businesses. Hillcrest Liquor and Fine Wines is among them.

“We got it because there was a lot of demand for glass recycling,” store supervisor Tracy Seiter said. “The community was not real happy when the city cut out the glass recycling program. So, Ace Glass came to us and proposed that we put the bin on the lot, and we’ve had a wonderful response. And we’re just so happy that we could provide that service.”

Seiter said people bring so many bottles, Ace empties the bin every two to three days.

“We, I think, got 17,000 pounds of glass just from this weekend,” Little stated. “And that’s not a Memorial Day/Labor Day weekend. That’s just any given weekend in Arkansas, which is pretty impressive, how many people are utilizing those.”

The overall result can be seen at the back of Ace Glass’s compound off E. Roosevelt Rd. A pile 12 feet tall, 50 feet wide, and 50 feet deep contains 1.5 million pounds of glass, Little estimated.

He said some of the glass has already been shipped out for processing, but Little said the cost of transportation is too high to send the rest.

The glass that has been shipped to Strategic Materials is being made into fiberglass insulation and to the tiny beads that make highway paint reflective.

Little said his plan is for Ace to open a plant in central Arkansas in 2020, so that the price of transportation would be minimal next year to make a kind of rock that makes road construction cheaper.

“Our intent,” he explained, “is to make a lightweight aggregate, which is—it looks like rock, like the lava rock you’d put in your garden, except the pores or the bubbles are really small, and they used that for infrastructure. So, behind a retaining wall a bridge abutment; it costs more than regular rock would, but because your structure costs less, it saves a ton of money.

“Any dollar that we can help the state save, and improve roads and bridges and things like that, we’re glad to be part of that, too.”

He said he has already spoken with cities in northwest Arkansas about expanding Ace’s recycling service around the state. He said it would be cost-prohibitive if he still has to send the glass to Dallas, but it would be feasible if the glass was only shipped within the state.

Little believes the plant will create 30 jobs initially and up to 50 jobs if Ace does expand service to northwest Arkansas.

“We hope that that not only brings the jobs that we create, but that other people will also find ways to recycle and do new products and bring new energy to Little Rock and Central Arkansas,” he added.

Little said more than 600 people signed up for the home pickup service at a price of $100 per year.

“It’s a very small number, compared to the 51,000 households in Little Rock,” he acknowledged, “but it’s still a significant number of people that have said, ‘we’ll pay even the premium to get that done right and the convenience of having that picked up at our house.’”

RELATED: Why can you no longer put glass, aerosol spray cans in recycle bins

Rather than a subscription model, Little said he wants to sign a contract with the City of Little Rock, so that glass recycling is included in everyone’s utility service.

He said he has spoken with city leaders about the idea, but did not have a timeline for when that might happen.

Until then, Seiter said she will happily have a big, grey bin outside her store.

“Anybody that can do their part, I think that we should step up as business owners to do that,” she said.