Sherwood boy gets special ride to school after being bullied

A rare disorder led Alex Bruorton, 8, to be a victim of bullying, his mom said. Alex was missing school until Bikers Against Child Abuse agreed to escort him to school. 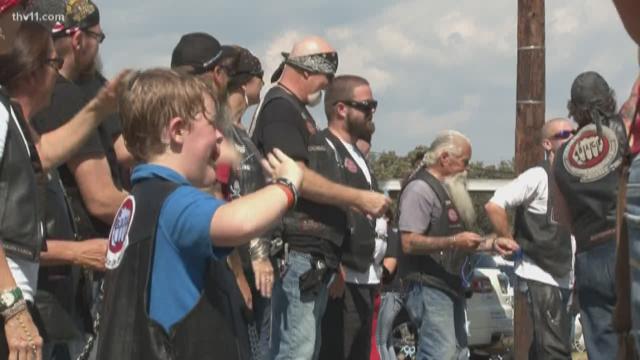 SHERWOOD, Ark. (KTHV) – An 8-year-old Sherwood boy got an extra special ride to school today when hundreds of bikers showed up to support him.

Alex Bruorton's mom said Alex was staying home from school, because kids were bullying him for how he looks. Alex has a rare condition called Clove’s Syndrome that causes parts of the left side of his face to never stop growing.

So, to help him feel better, Bikers Against Child Abuse showed up to take Alex to school in style and rally behind him.

"My reaction to having over a million friends now is very good. It makes me feel proud," Alex said.

"He had no idea. We've been only telling him that 20 or 30 people are coming. And we roll up and he's looking out and standing up in the back seat and he's like oh my god!" Alex’s mom Nichole Bruorton said.

Bikers Against Child Abuse member Kong said this ride was one of the biggest he has ever been a part of.

"We're here to show him that people do care for him. Kids can be mean but not everybody's mean. There are good people in the world," Kong said.

Thanks to BACA, Alex is officially a biker and he gets a cool name to go with it.

"I said we should've named him Rockstar instead of One-Shot because he's getting his picture taken, he's walking around fist-bumping. He's just a great kid," Kong said.

Nichole said this rally helped put a smile back on Alex’s face and made him feel confident again.

“He has the biggest heart ever," Nichole said. "And Alex would do anything for anybody he’s such a sweet kid. All he wants is for you to say hi. Give him a hug, he loves hugs.”

His mom also said she just wanted Alex to feel like he has a safe place to go.

"We want the kids to be aware that acceptance is such a big part of life," Nichole said. "And that's all Alex wants, is to just be accepted."

Despite the challenges Alex faces in the road ahead, hundreds of bikers will always have his back.

“I hope that parents can watch this and sit down with their kids and say just because somebody looks different doesn’t mean you treat them different,” Nichole said.

Sherwood Elementary is accommodating Alex and making sure he feels comfortable in the classroom. Pulaski County Special School District said it is against all bullying and will not tolerate it in any of their classrooms.