Both Jacob and Jamie Hyland had surgeries on Friday, Sept. 18. On top of their physical pain, a family member said grief is with the couple "day in and day out." 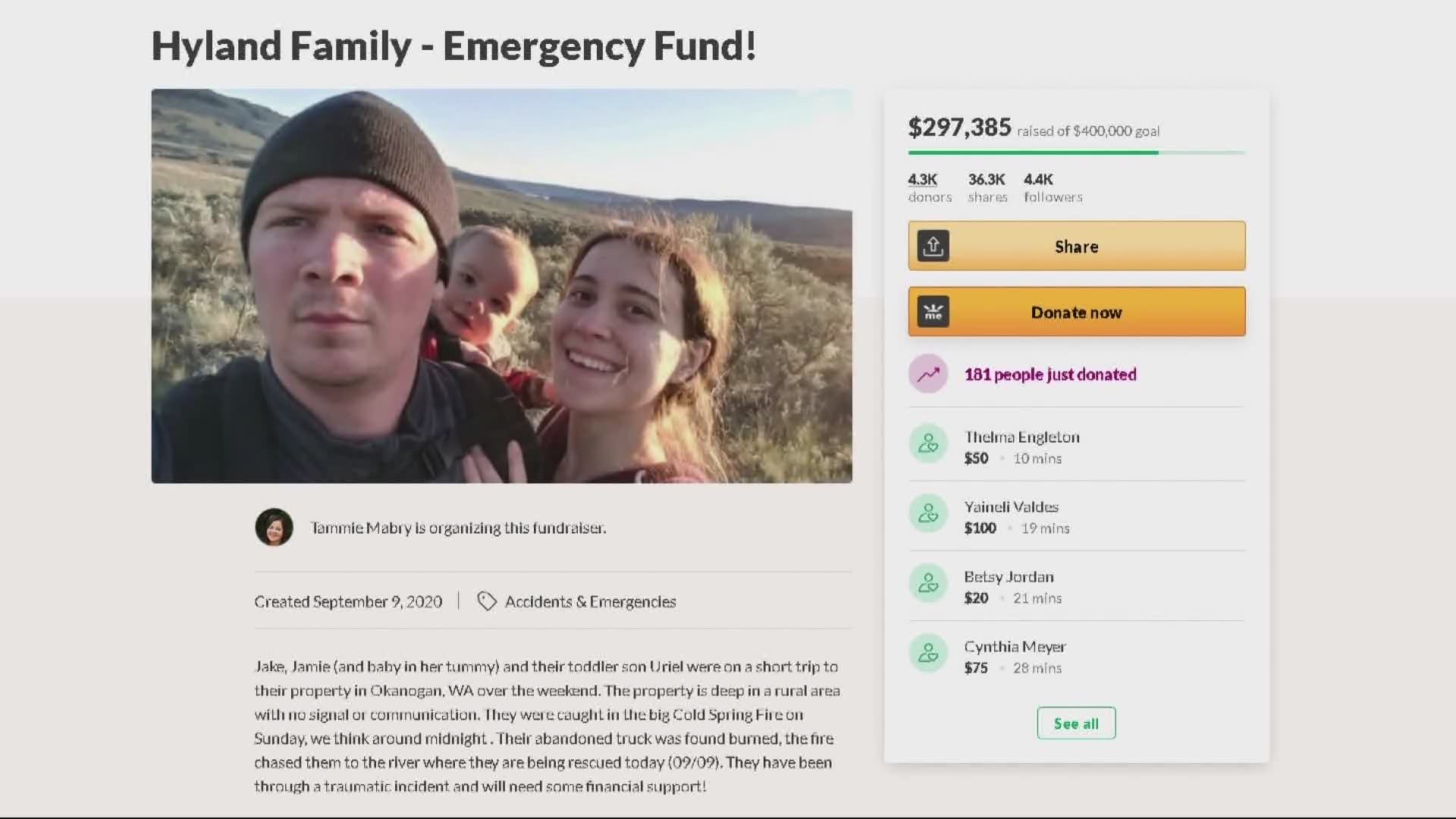 OKANOGAN COUNTY, Wash. — Two parents who lost their one-year-old son while fleeing from the Cold Springs Fire are continuing down the road to recovery after suffering severe burns.

In an update posted on Sunday, Sept. 20 to a GoFundMe page made for the couple, a family member said both Jacob and Jamie had surgeries on Friday.

During Jamie's 12-hour surgery, doctors worked on her arms, elbows and hands, and explored more of the infection that she's been fighting. They found the source of the infection during her surgery and tended to it.

Jake also had a surgery on Friday and doctors recasted his hands, the pain of which is "excruciating" and "enough to make one scream," the family member said.

The family member said those who love Jacob and Jamie "rejoice with every small miracle and hold tightly to hope" through the setbacks in their recovery.

"This journey for Jake and Jamie is not an easy one. There have been so many positives and we rejoice at all the strides forward. But in reality this is hard," she wrote.

On top of burn care, surgeries and recoveries, physical, voice and respiratory therapists, and medication side-affects and adjustments, the "emotional pain and grief is very real" for Jacob and Jamie, the family member said.

"It is right there with them, day in and day out," she wrote.

There have been some bright spots in Jacob and Jamie's recovery process over the past week.

In an update posted on Thursday, Sept. 17, the family member said Jamie is "very alert and talking as much as she has strength." She had also regained her ability to eat, and is working with physical and respiratory therapists.

Jamie also got out of bed on Wednesday and sat up in a wheelchair for the first time to celebrate her birthday in her husband's room. Jake sang "Happy Birthday" to Jamie and one of the nurses made her a pureed strawberry shortcake.

Jacob was also able to eat as of the update's posting but was still working on having bigger meals, which helps the healing process for burn victims.

Those who want to mail cards to Jacob and Jamie can send them to:

Harborview Medical Center also issued an update on Friday, saying the couple's condition remains serious and they are still in intensive care. Officials said they are improving and are being cared for by burn specialists. They also included a message from Jamie's sister, Dawnmarie Baxter.

Baxter spoke with KREM 2's Whitney Ward about her sister and brother-in-law's conditions, what led up to their rescue and the heartbreaking death of their son, Uriel.

Baxter said it started with an overnight Labor Day camping trip to some newly-inherited property in Okanogan County.

"He woke up to go to the bathroom at 1:30 in the morning, and smelled smoke, and that's when they had to go," she said. "So they woke up, threw everything in the car. He grabbed a five-gallon bucket of water and they drove the truck. They drove miles 5 to 7 miles before they had to crash it. I think it might have been on purpose to get through a fence, to get to the water.They crashed the truck and then fled on foot. This is desolate wilderness and they had to go a mile to get to that water, winding up and down through the land, in the dark. The pitch dark."

Jaime suffered burned to 37% of her body, Baxter said.

"She suffered the worst," Baxter said. "I'm wondering if she might have been leading them. either way, Jacob was being the strong, amazing husband that he was. He was carrying Uriel and the way they can tell from the burns, he's less burned because his whole body was a shield around this baby. "

Uriel died sometime between when the family evacuated and when they were all found on the banks of the Columbia River two days later. Jamie was also 14 weeks pregnant.

"My sister, all she's every wanted to be is a mom. She wants seven kids. and," she said with tears in her eyes. "In my worst nightmare, I can't imagine fighting for my child's life and losing that battle, even though they fought with everything they had."

Baxter said the couple was active in their church community and in giving back to others. Now, the community is stepping up in a huge way to give back to them on their long road to recovery.

"She looks better than I thought she would," she said. "They're both very recognizable. I didn't think with the degree of burns they have, they're just warriors. They're fighters. They're going to fight for each other."

How the couple was rescued

The Okanogan County Sheriff's Office received a call about the missing family at about 3:30 p.m. on Tuesday, Sept. 8. They were last known to be in the area of Cameron Lake Road and Paxton Canyon Road near Okanogan.

According to Sheriff Tony Hawley, a deputy learned that the family's vehicle was found burned and wrecked but unoccupied. The family was trying to leave their property to get away from the Cold Springs Fire, Hawley said.

Search-and-rescue crews found the couple and child along the bank of the Columbia River on Wednesday morning, according to Hawley. All three were burn victims and taken by boat to Bridgeport State Park.

An ambulance took the victims to Three Rivers Hospital in Brewster. The couple was later flown to Harborview Medical Center in Seattle for treatment.

Uriel was deceased when search-and-rescue crews found the family. His death marks Washington's first casualty from the recent wildfires.

Credit: Courtesy
Jacob and Jamie Hyland with their son

Detectives with the sheriff's office and Colville Tribal Police Department are investigating the child's death. Hawley told KREM's Taylor Viydo that the child's death is technically being investigated as a homicide for now since the fire could have been human-caused.

"If it's a human-caused fire, that goes into criminal charges for the death investigation as well. This child would not be dead without this fire beginning," Hawley said.

In a statement, Gov. Jay Inslee said he and his wife, Trudi, were "heartbroken" to hear about the one-year-old child's death.

"There is nothing I can say that can ease the pain from a loss of this magnitude. This child's family and community will never be the same. And neither will countless others who are reeling from the utter devastation these wildfires are leaving in their wake," Inslee wrote.

"I send my deepest condolences to the family and friends of this child and am keeping their parents in my mind as they work toward recovery in intensive care," the statement continues.

“I came out to Malden to see first-hand the devastation of the wildfires that erupted across Washington state over Labor Day weekend. Many homes and buildings were lost throughout the state, but the relief I felt in this tragedy is that we hadn’t lost any lives. That tragically and horrifically changed today.

During every fire season, I wake up each day praying we will not lose a single life — civilian or firefighter. To be honest, it’s horrible that we must base so much on prayer.

My team at DNR and the firefighting community all across Washington will continue working as hard as we can to protect lives and communities. But I need every single resident of Washington to care about this. Not just today, but tomorrow, and every day until we have the resources to protect our communities and protect our firefighters.”