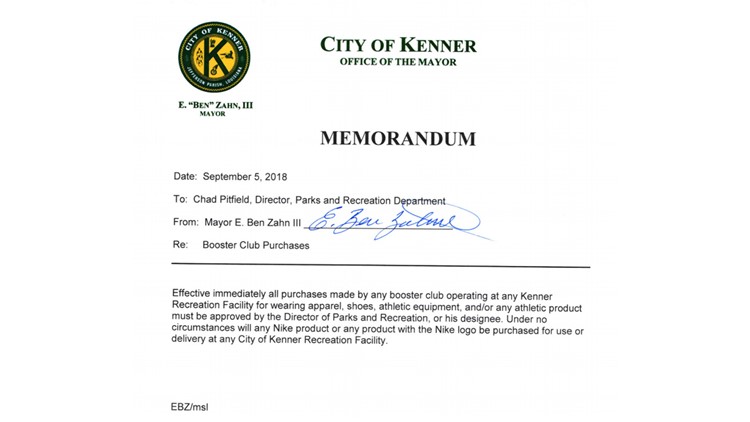 The memo, first posted on Facebook, caused a social media firestorm and was shared thousands of times before it drew the rebuke of at least one Kenner councilman.
Author: Mary Staes
Published: 2:01 PM CDT September 9, 2018
Updated: 8:57 AM CDT September 10, 2018

KENNER, La. – The boycott of Nike products appeared to reach Kenner this week as Mayor Ben Zahn ordered that playground booster clubs not wear or buy any Nike products, which are now pitched by controversial former quarterback Colin Kaepernick.

The memo, first posted on Facebook, caused a social media firestorm and was shared thousands of times before it drew the rebuke of at least one Kenner councilman.

Owen Rey, the booster club president for Susan Park Playground, provided a copy of the memo, dated Sept. 5, to WWL-TV.

“Effective immediately, all purchases made by any booster club operating at any Kenner Recreation Facility for wearing apparel, shoes, athletic equipment, and/or any athletic product must be approved by the Director of Parks and Recreation, or his designee. Under no circumstances will any Nike product with the Nike logo be purchased for use or delivery at any City of Kenner Recreation Facility,” the memo reads.

After the memo had been shared on social media, Councilman Gregory Carroll took to Facebook, saying he had no knowledge that the memo was being sent out.

“Last night a disturbing memorandum was circulated that the City of Kenner Mayor E. Ben Zahn wrote to the Kenner Recreation Director, directing him, regarding Booster Club Purchases, banning Nike products, usage or delivery of all Kenner Recreational Facilities,” Carroll wrote. “I was not made aware of this decision beforehand and it is in direct contradiction of what I stand for and what the City of Kenner should stand for. I am 100% AGAINST this decision. I will meet with the Mayor and other Council members in an effort to rescind this directive. I will keep the citizens of Kenner, and the Greater New Orleans area informed as we move forward.”

Nike has been under scrutiny after putting Kaepernick at the center of its latest "Just Do It" ad campaign.

Rey says if the boosters want something that's going to benefit the kids of the playground, logos shouldn't matter.

"It shouldn't matter what brand, as long as it helps the kids and what we're trying to accomplish at the park,"

Kaepernick, a free agent, was the first player to kneel during the national anthem before an NFL game as a peaceful protest against social injustice and police brutality. He hasn't been with an NFL team since 2016.

Stay with Eyewitness News on WWL-TV and WWLTV.com for more on this developing story.