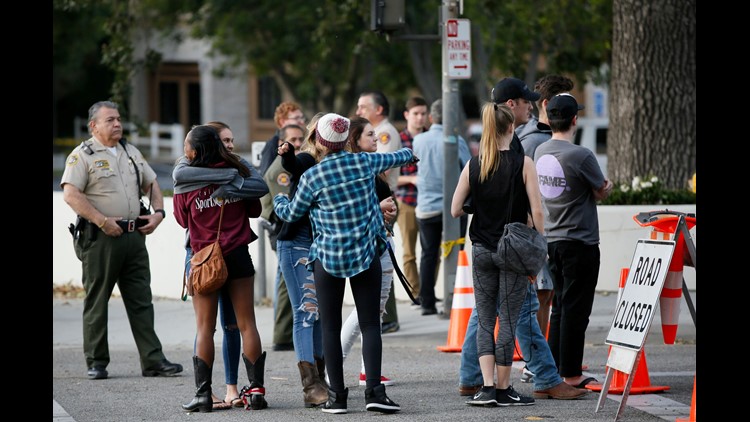 Photo by: ROBYN BECK, AFP/Getty Images
The home of suspected nightclub shooter Ian David Long is searched on November 8 2018, in Thousand Oaks, California. - The gunman who killed 12 people in a crowded California country music bar has been identified as 28-year-old Ian David Long, a former Marine, the local sheriff said Thursday. The suspect, who was armed with a .45-caliber handgun, was found deceased at the Borderline Bar and Grill, the scene of the shooting in the city of Thousand Oaks northwest of downtown Los Angeles. (Photo by Robyn Beck / AFP)ROBYN BECK/AFP/Getty Images ORG XMIT: Shooting ORIG FILE ID: AFP_1AO6HY

3 minutes of terror: How the Thousand Oaks shooting unfolded

In just three minutes Wednesday night, 12 people were killed, and many others injured after a gunman unloaded his semi-automatic handgun in a Southern California bar.

About 40 miles west of Los Angeles, hundreds of people — many of them college students — were inside the Borderline Bar and Grill in Thousand Oaks, California. At least 11 people were killed at the scene; a deputy later died from his injuries. The gunman, identified by police as Ian David Long, was found dead inside.

Here's a look at how Wednesday evening's events unfolded, as detailed by the Ventura County Sheriff's Department:

The western-style bar’s website says it’s the county's "largest dance hall and live music venue," with a 2,500 square-foot dance floor, pool room, and areas for eating and drinking. It's been open for more than 25 years.

More: He survived Las Vegas shooting, only to die in Thousand Oaks: These are the victims

According to witnesses, Long said nothing as he fired. People used furniture to break windows and jump out of second-floor windows to escape. Some hid under pool tables, others in an attic.

The shooting lasted about three minutes, but it's one of the most deadly of the year.

Helus was shot several times, and the patrolman pulled him out of the building. Other officers soon arrived, entered the building and found 11 people dead.

Helus, a 29-year veteran of the department, was looking to retire "in the next year or so," Ventura County Sheriff Geoff Dean said.

"Ron was a hardworking dedicated sheriff’s sergeant," said Dean, trying to hold back tears. "He was totally committed. He gave his all. Tonight, as I told his wife, he died a hero because he went in to save lives, to save other people."

The home of suspected nightclub shooter Ian David Long is searched on November 8 2018, in Thousand Oaks, California. - The gunman who killed 12 people in a crowded California country music bar has been identified as 28-year-old Ian David Long, a former Marine, the local sheriff said Thursday. The suspect, who was armed with a .45-caliber handgun, was found deceased at the Borderline Bar and Grill, the scene of the shooting in the city of Thousand Oaks northwest of downtown Los Angeles. (Photo by Robyn Beck / AFP)ROBYN BECK/AFP/Getty Images ORG XMIT: Shooting ORIG FILE ID: AFP_1AO6HY
ROBYN BECK, AFP/Getty Images

Alaina Housley had gone to the Borderline to line dance with her friends.

She was a freshman at Pepperdine University. In high school, she was an honors student who played varsity soccer and served in student government.  She is the niece of "The Real" host and "Sister, Sister" star Tamera Mowry-Housley.

Kristina Morisette worked at the Borderline Bar. She graduated from Simi Valley High School and friends described her as a positive and caring person.

Martha and Michael Morisette said their daughter had just bought a 2017 Jeep Renegade with the money she earned from the bar. She told her parents had she wanted to apply for an animal training program in Austin.

Marky Meza would have turned 21 on Nov. 19. He grew up in Santa Barbara and Carpinteria and and graduated from Carpinteria High School.

He worked at the Borderline as a busboy and food runner. His family described him as a “loving and wonderful young man who was full of life and ambition.”

Noel Sparks was a regular at the Borderline, where she spent Halloween and celebrated her 21st birthday in August.  She often went there with friends and her mother.

An accomplished artist and dancer, she was majoring in art at Moorpark College.

She worked part time at Calvary Community Church in Westlake Village, where she helped with children's programs, the Rev. Shawn Thornton told the Associated Press.

Jacob Dunham was at the Borderline with his friend Blake Dingman, who also died. They were off-road driving enthusiats and Jacob owned a off-roading truck he bought with money from a part-time job. He and his father worked together on the truck.

A recent graduate of Conejo Valley High School, Dunham persevered in receiving his diploma despite an accident as a young child that robbed him of his sight in one eye, said Jason Rosebaugh, one of his teachers.

Blake Dingman was at the Borderline with his friend Jacob Dunham, who also died. Like Dunham, Dingman enjoyed off-road driving. He played baseball at Hillcrest Christian School in Thousand Oaks.

Cody Gifford-Coffman was good with kids and was the head umpire for the Camarillo Pony Baseball League. He planned on joining the U.S. Army, according to his father, Jason.

Gifford-Coffman loved playing baseball with his dad and being an older brother to his two siblings, age 8 and 9. He was due to become an older brother again: Jason Coffman and his wife are expecting a baby girl.

Justin Meek was credited with saving the lives of several people in the Thousand Oaks shooting.

A criminal justice major at California Lutheran University, Meek played water polo, sang in the choir and was president of the Club Italia. He worked in the school’s Veterans Resource Office, assisting veteran-students in VA certification.

He planned on joining the U.S. Coast Guard.

Telemachus Orfanos, called “Tel” by his friends, was a survivor of the mass shooting at the Las Vegas country music festival on Oct. 1, where 58 people were killed. A former Eagle Scout, he served in the U.S. Navy after graduating high school in 2009.

Daniel Manrique served in the U.S. Marine Corps and started the Ventura County chapter of Team Red, White and Blue in 2014 to help veterans make the transition from military to civilian life, says friend Sara Bergeron.

“I've never met anyone my whole life that was so selfless and committed to helping veterans succeed and just thrive. He never quit on people. He never gave up, even if someone tried to push him away. He always still reached out,” she said.

Sean Adler was the father of two children. He was a bouncer at the Borderline Bar & Grill. His sister, Valerie Adler, told NBC News that Adler tried to disarm the gunman as he opened fire.

Adler owned a coffee shop called Rivalry Roasters, which he opened over the summer. He taught soccer and taekwondo and was a strength and conditioning coach at Royal High School.