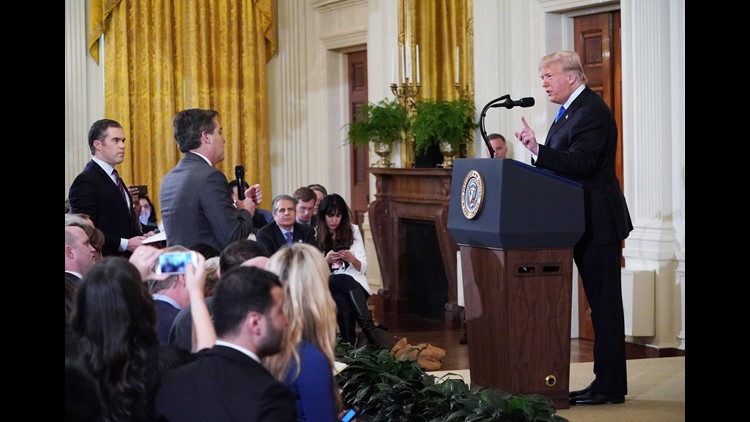 Donald Trump says he may revoke press credentials for other reporters, not just CNN's Jim Acosta

PARIS – Defending his decision to revoke a CNN reporter's White House press pass, President Donald Trump said Friday he may take the same action against other reporters who have questioned his administration.

"It could be others also," Trump told reporters at the White House.

Trump said he pulled the pass of CNN's Jim Acosta because "he's a very unprofessional guy," and he singled out April Ryan of American Urban Radio Networks as another potential target.

"She's very nasty, and she shouldn't be," Trump said.

Ryan, one of the relatively few African-American women covering the White House, has frequently criticized Trump's attempted crackdowns on the press.

Responding to Trump on Twitter, Ryan said: "I love this country and have the most respect for the Office of the President. I will continue to ask the questions that affect America, all of America."

I love this country and have the most respect for the Office of the President. I will continue to ask the questions that affect America, all of America.

Trump commented as he left the White House on a trip to Paris for events marking the 100th anniversary of the end of World War I.

Acosta – who is in Paris covering Trump's trip – tweeted: "My friend @AprilDRyan is an incredible journalist and a wonderful person. If you got to know April as I know her, you would love her too."

The suspension of Acosta's press pass came after he and Trump had a tense exchange during a news conference Wednesday.

News organizations condemned the move, calling it a threat to freedom of the press. "Such interactions, however uncomfortable they may appear to be, help define the strength of our national institutions," a statement from the White House Correspondents Association said. "We urge the White House to immediately reverse this weak and misguided action."

Asked if the Acosta decision is permanent, Trump said: "As far as I'm concerned, I haven't made that decision."

White House press secretary Sarah Sanders said the decision was made because of the reporter "placing his hands" on a White House employee who was retrieving the microphone from him as he and Trump argued during the news conference.

As President Donald Trump points to CNN's Jim Acosta, a White House aide takes the microphone from him during a news conference in the East Room of the White House, Wednesday, Nov. 7, 2018, in Washington.
Evan Vucci, AP

There's no evidence that happened, and the White House appears to have based its claim on a heavily edited video.

In the video posted by Sanders, Acosta's arm movement is sped up, making his gesture appear more aggressive. The video was earlier shared by the editor of InfoWars, whose founder has pushed conspiracy theories that the 2012 Sandy Hook shooting never occurred.

In his exchange reporters, Trump denied promoting a doctored video.