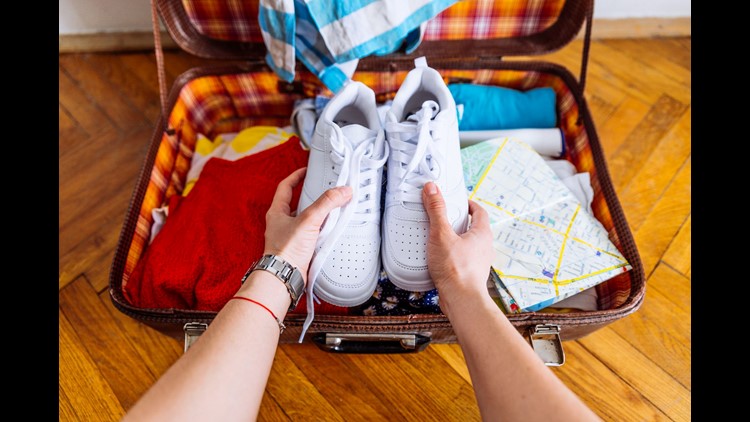 Photo by: Getty Images/iStockphoto
Standing out while you're visiting another place can make life uncomfortable, and maybe even endanger your safety.

Karin Kemp thought she'd done everything she could to not look like a tourist in Belgium. She wore muted clothes, learned helpful phrases in French and Flemish, and did her best to blend in. Still, Americans would stop her on the street to ask for directions.

"I finally asked one how he knew I was an American," says Kemp, a retired graphic designer from Matthews, North Carolina. "He pointed to my shoes."

She was wearing white sneakers. Gotcha!

You should be concerned about fitting in, even if you're an artist like Kemp. Standing out while you're visiting another place can make life uncomfortable – and it could even cost you yours. This summer, four visitors cycling in Tajikistan were targeted and killed by  terrorists. The U.S. State Department is continuously warning Americans about travel abroad, sometimes advising them to stay away from touristy areas.

So how do you not look like a tourist, even if you are one? It's a combination of wearing the right clothes, visiting the right places, and behaving in an un-touristy way, say experts.

It's what you wear

"Nothing identifies you more like a tourist and an American as white Nike sneakers," says Kemp. "The blue jeans and sneakers went in the closet."

Sometimes, blending in means staying away from clothes marketed to travelers.

Cameras are also a dead giveaway.

"If you enjoy photography, I would suggest using a bag for your camera that doesn't immediately look like a camera bag," says Wayne Goodwin, a world traveler who founded Evolve Travel Goods, a travel gear company.

But make sure it's the right bag.

"Having a backpack or fanny pack are also dead giveaways that you don't fit in," says Glen Loveland, a human resources manager who lives in Beijing.

Bottom line: If you want to blend in, you have to look the part. You don't have to look like a local, but avoiding bright clothes, glittery jewelry and high-end electronics can make you less of a target.

The 8 worst fashion mistakes you make when traveling 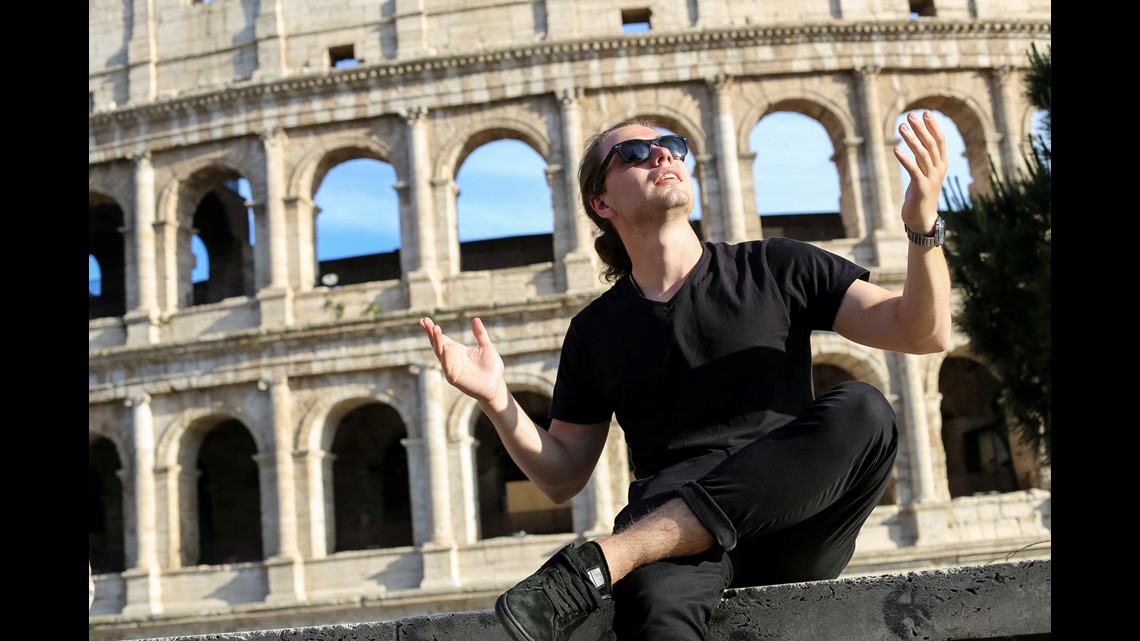 01 / 08
Under-dressing: Americans often dress more casually than people do in most other parts of the world. That habit can come off as a sign of disrespect, or even prevent you from being allowed into certain places.
02 / 08
Shoes that are just plain terrible: Nothing screams “tourist” more than a clunky pair of running sneakers paired with jeans in the name of comfort. You don’t need to look like you’re heading to the gym in order to save your feet from walking. This will of course vary from person to person depending on style preference and perhaps medical need — but lightweight shoes with a little bit of support usually go a long way.
03 / 08
Flip-flops: Flip-flops are not shoes. Flip-flops are a travel tool that you should only pack in your beach bag for the walk from the hotel to the sand — or in your suitcase’s laundry compartment for use in grimy hostel or spa showers.
04 / 08
Shorts on the plane: Aren’t people who wear shorts on the plane freezing? Plane cabins are typically chilly, so covering up at least to the shins is a good idea. It might be hot outside the airport, but being comfortable on the plane should take priority, especially for long flights.
05 / 08
Revealing clothing: Women visiting the Middle East are typically expected to be moderately covered, from their knees up to their shoulders. But it’s important to note that there are plenty of countries across the globe that also scrutinize certain types of revealing clothing. Buddhist cultures as well as Buddhist and Hindu temples and Christian churches typically expect women to cover up, and the shorter shorts that are widely accepted in the U.S. might not be a good idea in more traditional and/or religious parts of Europe, South America, Africa and beyond.
06 / 08
Obnoxious T-shirts: It’s a good idea to leave shirts with political slogans, designer logos or even sports team names at home if you don’t want to be approached about them. Arguing about politics and other controversial topics like religion, money and sports rivalries might be more culturally acceptable than you’d think in your destination, and wearing your opinions on your chest could make you a target for those who want to air some grievances.
07 / 08
Over-activewear: Athleisure can be a cool and comfortable way to fly — but suiting up in activewear for a day out on the town can be a good way to be pegged as an ugly American. Leave the hoodie and running shoes in the hotel room and opt instead for classic staples made from high-performance material.
08 / 08
Backpacks: Unless you’re commuting to class or work, there’s no reason any grown adult should be toting around a huge backpack on an average day out. Travel backpacks in particular can get huge and become a hassle for everyone around you, especially if you’re taking busy public transit or heading to a crowded tourist attraction.

It's where you go

Paula Miller, a retired teacher who lives in Kitty Hawk, North Carolina, watches the ebb and flow of tourists in her town.

"It’s pretty easy to figure out if they are tourists," she says. "From the erratic driving patterns to the entire family visiting the grocery store. Most of our visitors rent houses near the beach, so they are often stocking up at the grocery store and trailing each other around the aisles. We have one main road, and people often make sudden braking moves or turn without signaling."

Sometimes, tourists flock to dangerous places. For example, the State Department warns that visitors to Turkey should "stay alert" in locations frequented by Westerners, particularly at popular tourist locations in Istanbul. The reason is simple: For the bad guys, tourist attractions are a target-rich opportunity.

And sometimes, tourists don't even know why they're there. Seriously. At Walden Pond, some visitors don't see what the big deal is, according to Corinne Smith, who works at the gift shop and has authored several books on Henry David Thoreau.

"Don't come in and say, 'I don't remember – why is this place important?'" she says. "Know at least a little when you come."

Otherwise, they'll know you're a tourist.

It's how you act

The final way to not look like a tourist is to not act like one. And as you can imagine, I could write an entire book on this subject.

The list of annoying tourist behaviors is long. When I lived in Orlando, we could always tell the tourists by their vehicles. They drove overpacked minivans that occasionally veered off I-4 because Dad was driving all night to get to Disney World. Oh, and the out-of-state plates, of course.

Michael Brein, a Seattle psychologist who specializes in travel, says visitors who do annoying or culturally insensitive things can't help themselves. They're just ignorant.

"They neither particularly understand much of the depth of the peoples and cultures of the countries they are visiting," he says. "Nor do they have an appreciation of the languages and subtleties of the cultures."

But there's hope if you're trying to not look like a tourist. You can study local customs before you go and make an effort to learn about the place you're visiting. You can take a few minutes to pack the right clothes – and plan the right itinerary. Who knows, you might have a better trip?

More insider tips on how to not look like a tourist

• Think of it as a game. At least that's how behavioral strategist Ron Evans describes the art of blending in. "How closely can I mimic surrounding behavior to fit in without notice?" asks Evans, who runs a consulting firm called Group of Minds. "I consider it a fascinating game."

• No maps! That's the advice of Alexa Amador, a digital marketer for a health services company in Sugar Land, Tex., who frequently visits Europe. "Don't walk around with a giant map in your hands," she says. "Oh boy, everyone can tell when someone is very lost, pacing back and forth, unfolding and refolding the map, and are on the verge of panicking." Instead, keep the map on your phone – and stay cool.

• Slow down. Tourists try to do everything in a day. If you stop running, you won't stand out. "Just be still for a while – at a café table, on the perimeter of a tourist site, on the bench by the river," advises Debra Ruzbasan, a sales manager for Ed-Ventures, a tour operator. "You will blend in. You will also be less of a target for pickpockets and other nuisances."

Christopher Elliott is a consumer advocate. Contact him at chris@elliott.org or visit elliott.org.