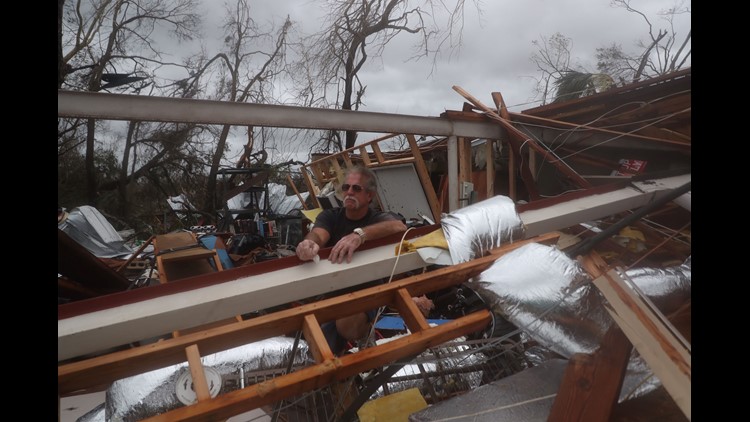 Michael smashes records: Here's the latest information on where the storm is, damage and more

Hurricane Michael weakened to a tropical storm Thursday but remained a menace as it rolled across the Southeast, leaving at least seven dead after tearing a path of devastation through the Florida Panhandle and parts of Georgia.

The storm was the third strongest to hit the United States mainland in recorded history after making landfall Wednesday as a Category 4 colossus with sustained winds of 155 mph – just 2 mph short of iconic Category 5 status.

“This morning, Florida’s Gulf Coast and Panhandle and the Big Bend are waking up to unimaginable destruction,” Florida Gov. Rick Scott said. “So many lives have been changed forever. So many families have lost everything. … This hurricane was an absolute monster.”

Where the storm is now

As of 5 p.m. ET, the storm was centered 20 miles north-northwest of Raleigh, North Carolina, with maximum sustained winds of 50 mph, according to the National Hurricane Center. Heavy rain was pelting the Carolinas, triggering flood warnings. Tornadoes could also spin up in Virginia.

The storm was rolling northeast at 24 mph. A turn east-northeast across eastern North Carolina and southeastern Virginia is expected Thursday evening before the storm races out into the Atlantic Ocean early Friday morning.

The damage Michael has wrought

Thousands of homes and businesses were blown apart as Michael cut its swath across the Florida Panhandle and into Georgia. Hospitals had to be evacuated. Aerial views show entire neighborhoods wiped out.

An 80-mile stretch of I-10 west of Tallahassee, Florida, was closed to clear debris. Beaches disappeared, military bases were damaged, cars and trucks were flipped and smashed. Power outages affected more than 650,000 customers in the two states alone. Alabama, South Carolina and North Carolina reported hundreds of thousands more outages.

More than 1,000 search and rescue personnel were searching through rubble for survivors. A Jayhawk rescue helicopter crew pulled nine people from a bathroom of their Panama City, Florida, home after their roof collapsed, the Coast Guard said. "One hundred percent of our focus is on rescue and recovery from this devastating storm," Scott said.

Panama City's largest hospitals shut down, although emergency rooms were kept open. The Gulf Coast Regional Medical Center was evacuating patients and suspended most services. "The safety and well-being of our patients and employees remains our top priority," the hospital said in a statement.

Bay Medical Sacred Heart also provided shelter for over 1,500 employee and physician families and first responders during the storm.

Rescue groups were dropping pallets of food and water via helicopter to staff and patients at Florida State Hospital in Chattahoochee, Florida, Thursday. The facility houses the largest psychiatric hospital in Florida, caring for nearly 40 percent of all state mental health patients, according to the Miami Herald.

The storm was a record-breaker

More: Hurricane Michael: What you need to know in graphics

Rainfall may cause life-threatening flash floods in Georgia, the Carolinas and Virginia late Thursday evening. Michael is expected to produce total rain accumulations of 4 to 7 inches from northern South Carolina to northwestern North Carolina, and into south-central to southeast Virginia. Isolated maximum totals of 9 inches are possible in North Carolina and Virginia. The storm is set to move into the Atlantic Ocean by early Friday.

There are seven reported deaths. A falling tree killed a man after it crashed into his home in Greensboro, Florida, authorities said. It trapped the resident, said Gadsden County Sheriff’s Office spokeswoman Anglie Hightower, and downed power lines and blocked roads made it hard for emergency crews to get to him.

An 11-year-old girl died in Seminole County, Georgia, after a tree fell on a home, according to local emergency management officials. A falling tree also killed one man in Iredell County, North Carolina.

It's too early to tell for sure, but widespread roof damage and destruction across several states showed up on the Army Corps of Engineers' computer models. The Corps was preparing to cover tens of thousands of rooftops, according to a senior official.

AccuWeather predicted Michael's total damage and economic impact will reach close to $30 billion, which would make it one of the 10 costliest hurricanes in U.S. history.

The National Hurricane Center estimated that the peak storm surge inundation during the storm was 9-14 feet from Mexico Beach east through Apalachee Bay. The highest surge was estimated near Mexico Beach and Port St. Joe.

Where the storm made landfall

Michael made landfall at about 1:40 p.m. Wednesday near Mexico Beach, Florida, a town with a population of about 1,000. That's about 20 miles southeast of Panama City, where dozens of utility poles were snapped and parking lots glistened with broken glass.

Police officers spent the night patrolling the area to prevent looting and responding to calls for assistance, making do with damaged patrol cars that eased across downed power lines and even around small buildings flipped into the middle of streets.