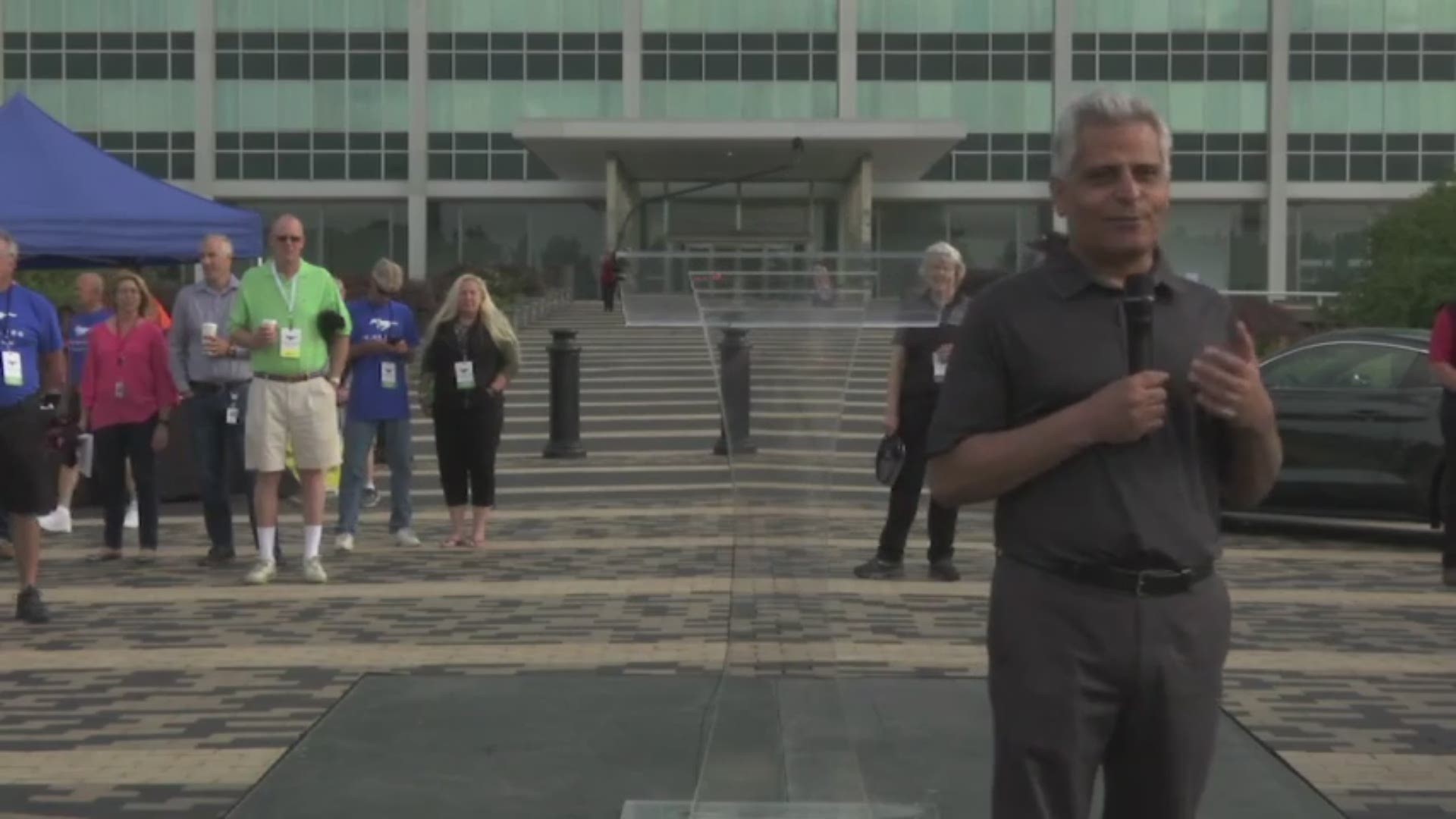 Credit: Kimberly P. Mitchell, Detroit Free Press
Gail Wise, 76, of Park Ridge, Illinois is the first buyer of a 1964 Ford Mustang. She and the car are at Ford world headquarters in Dearborn celebrating the building of 10,000,000 Mustangs on Wed., Aug 8, 2018.

DETROIT -- Tom and Gail Wise disagreed about whether a broken-down car should be stored in a family garage for 27 years or sold for junk. He insisted they keep it because, he promised, one day he would find the time to fix the vehicle himself.

It was her skylight blue convertible Ford Mustang, purchased at age 22 in 1964, that their family of six drove for 15 years.

One day, it just stopped running. And there it sat until Tom retired. When he started hunting for car parts on the internet, he discovered a story about someone with a similar car who claimed to be the very first Mustang owner, with a purchase date of April 16, 1964.

“Tom came to me and said, ‘I think you bought the car a day earlier,’ ” Gail Wise recalled. “And, sure enough, he went down to the basement and found the receipt and the owner’s manual. Sure enough, I had purchased the car on April 15.”

They called Hagerty Classic Insurance, experts on collector cars, and learned a paper trail was essential.

“We had everything,” Gail Wise said. “We didn’t know it was anything special. But we kept the new car invoice, the registered owners manual. Tom’s a saver.”

So now, as Ford celebrates production of the 10-millionth Mustang, Gail Wise is back in the spotlight. She was at company headquarters last week and, from Thursday through Saturday this week, her Mustang will be on public display in Royal Oak, Mich.

Her story, she notes, is filled with luck and mystery.

'That convertible was for me'

The new third-grade teacher was living at home with her parents on the northwest side of Chicago and sharing her father’s red and black 1957 Ford. But she had accepted a job in the suburbs. So Helen and Cleadis Brown agreed to lend their daughter money for a new car and they headed over to Johnson Ford on Cicero Avenue.

“I told the salesman I wanted a convertible and he said, ‘I have none on the floor.  Come into the back room, I have something special to show you,’ ” Gail said. “There were two Mustangs, one was a hard top. And he didn’t even bother to show me that one. He lifted the tarp and I knew that convertible was for me.”

Back then, new cars always came out at the end of September and Ford wanted to shock the world with an April reveal. The company had distributed Mustangs to dealerships around the country so salespeople would have something to show when Lee Iacocca unveiled the car at the World’s Fair in New York on April 17, 1964.

“This was two days before, and it was all top secret,” Wise said. “But he sold it to me. I drove out of that showroom with everyone waving at me and asking me to slow down. TV ran a lot of advertisements for Mustang but they never showed the car. They just showed the logo and said, ‘It’s coming.’ For this to be out in April was a really, really big thing. People were so happy, giving me thumbs up, even the police. I don't remember having the top down, so it must've been cold. I wanted to keep driving, but I only had to go about 3 miles to get home.”

She married two years later, bought a home and used the Mustang as a family car with four kids.

“You just didn’t go out and buy new cars,” Wise said. “Tom was using it for work. We could fit three kids in the back seat and I’d hold the youngest on my lap. We would go to McDonald’s and eat in the car. And then one day, he pushes it into the garage. I wanted to get rid of it because we needed space for children’s stuff. He kept saying, ‘It’s my retirement project.’ "

He built an addition onto their two-car garage for the Mustang.

Credit: Gail Wise
The Wise family, Tom and Gail with their four kids, shot a Christmas card picture in July 1979 with the Ford Mustang. Shortly after, Tom pushed the car into the garage for 27 years.

“When I was young and single, I enjoyed driving that car,” she said. “The highways were brand new. We had no traffic and you could fly. The first time I saw that Mustang, I thought it was so sporty, with bucket seats and a transmission on the floor. Usually sports cars were expensive, and I could afford this car.”

“It can be difficult to place a specific value on such a unique car and story. A car with significant provenance like this — being the original owner of the first-ever sold Ford Mustang — would likely have a premium of around 10 times the current market price,” he said. “Enthusiasts are drawn to the bookends of models. It is stunning that the first-ever sold Mustang is still owned by its original owner.”

Gail Wise said she only wishes her mom and dad could be here.

Credit: Kimberly P. Mitchell, Detroit Free Press
The grill on the 1964 Ford Mustang owned by Gail Wise, the first Mustang sold. It is at Ford world headquarters in Dearborn during the event celebrating the building of 10,000,000 Mustangs on Wed., Aug 8, 2018.

Stories about Mustangs leave even industry analysts a little stunned.

“When Mustang hit in 1964, it created a global sensation,” said John McElroy, a longtime auto industry observer and "Autoline" host. “It created a frenzy. It was a car designed and developed by young people, hotshots. Ford blew through production estimates, selling like 600,000 the first year.”

The insane love for Mustang reflects nostalgia for a time when the muscle car war was just getting going and America had a can-do attitude before Vietnam and Watergate.

“I remember when I was a little kid, Dad worked for Ford and brought it home on a Friday night and I remember getting up on Saturday morning and going and sitting in the car for hours," McElroy said. "I was, like, 11 years old. We lived in Buenos Aires, Argentina. It was the only Mustang in the country, and when we drove, it was like the day the Earth stood still. Everybody was paralyzed looking at this car.”

More: Watch as a Ford Mustang is consumed by fiery volcano lava

So it’s no surprise to anyone that Gail Brown stopped traffic in Chicago.

“When you look back at the history of the Mustang, the very first car was purchased by a young professional that totally represented that era. Is there a more perfect person?” said Ted Ryan, Ford historian, whose father had a 1965 yellow Mustang. “America had a sense of optimism. Baby boomers were coming of age. Mustang was this beautiful combination of time and place.”

Ford invited Tom and Gail Wise to come to Detroit this month to celebrate the Mustang milestone, and the Dearborn, Michigan, automaker shipped the Mustang out from Illinois.

“It’s just amazing that this Mustang has been built continuously all these years,” said Tom Wise, 76, an electrical engineer who served in the U.S. Navy as a submariner in the Atlantic. “Ford builds a reliable car.”

Their garage these days houses a 2013 Ford Escape and a 2015 Ford Edge. They can’t believe that, for so many years, the family stacked lawns chairs on the Mustang.

“Anything you didn’t want on the garage floor, it was piled high on the car,” Gail Wise said. “Tom drives us now. I saw how hard he worked to put this car together. I don’t want to be the one to put a dent in it.” 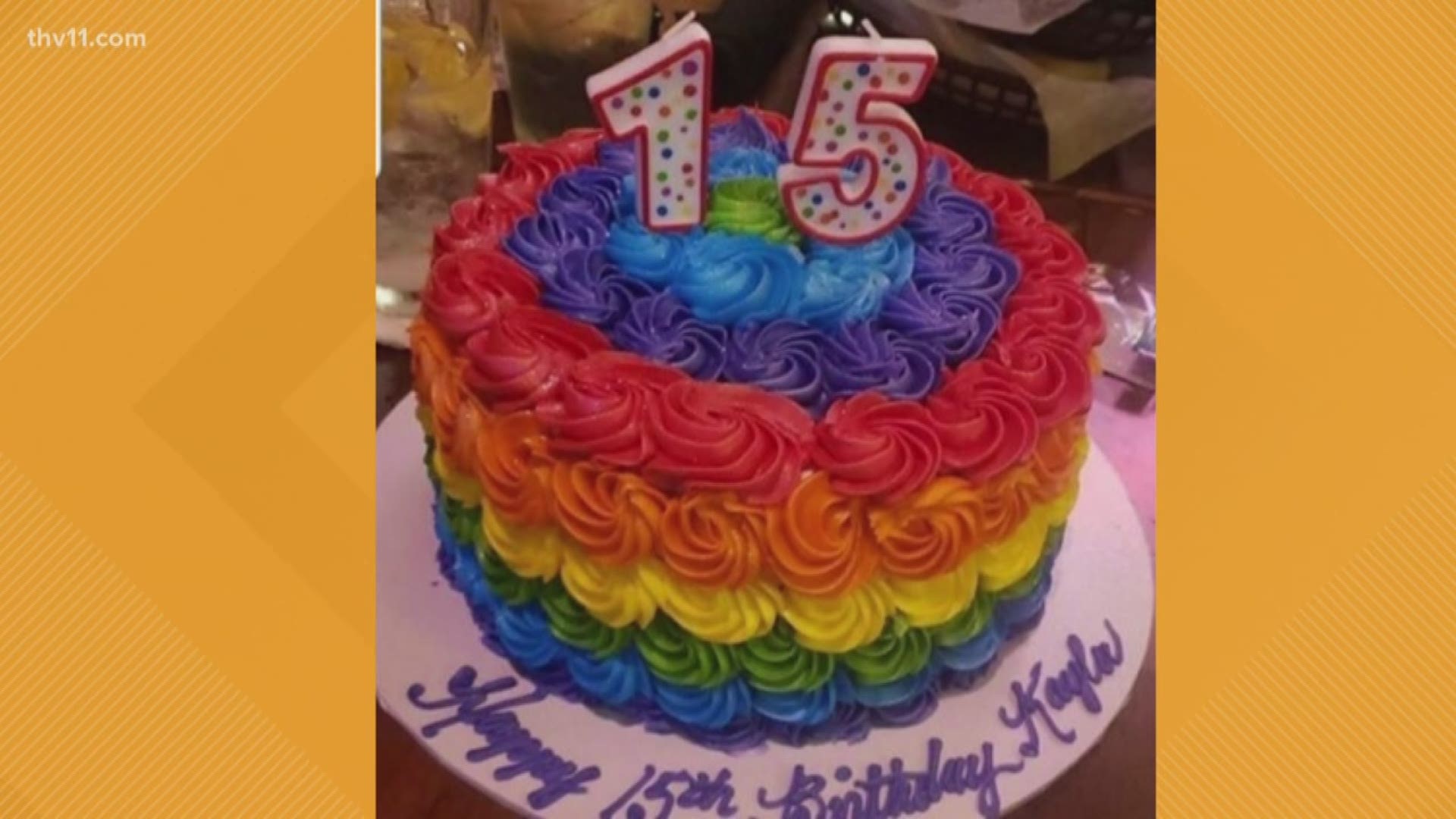 Girl expelled because of rainbow cake