'Trump Baby' flies as tens of thousands march against US president

LONDON — "Trump Baby," a giant inflatable blimp created to protest President Donald Trump’s visit to the United Kingdom, flew high in the sky opposite the Houses of Parliament on Friday, before tens of thousands braved the English heat to march against the U.S. leader, culminating in a rally marked by speeches, song and rap.

The 20-foot long, diaper-wearing, smartphone-clutching balloon flew for several hours above hundreds of bystanders, before it was deflated and packed away. It will make its next appearance in Scotland, where Trump will spend the weekend following his two-day working visit to the southeast of England.

A smaller version of the blimp accompanied tens of thousands protesters on a march and rally in central London as temperatures reached up to 79 degrees — high by British standards. The Stop Trump Coalition, which was behind that event, said that 250,000 people attended, many of them in fancy dress, including several dressed up as Trump.

The marchers, including children, made their way down Regent Street — normally rife with tourists — chanting slogans including "refugees are welcome here," whose streets, our streets" and "shame on you."

Ian Christian, a 61-year-old retiree who was one of the marchers, called Trump a "right-wing bigot."

"How he ever came to become president I have no idea, I think the American people must have lost their heads, just like we did with Brexit," he said. "I love America but I hate Trump, and I hate what he's doing to the country."

Demonstrators raise a effigy of Donald Trump, being dubbed the 'Trump Baby', in Parliament Square in protest against his visit to the United Kingdom.
CHRIS J RATCLIFFE, GETTY IMAGES

Trump, who arrived in Britain on Thursday after attending the NATO summit in Brussels, is largely avoiding the British capital during his stay and is unlikely to see the protests, which are being held around the country during his four-day visit. Protesters outside Windsor Castle, where Trump met with Queen Elizabeth II on Friday, held signs including the words: “Off with his head!”

A pro-Trump march that will combine with a demonstration calling for the release of a jailed British far-right leader is scheduled to be held in London on Saturday.

Nona Hurkmans, a "Trump Baby" spokesperson, told USA TODAY that the blimp represented how the protesters felt about Trump.

“We’re trying to make a statement about Trump's toxic politics and his policies that we do not agree with," she said. "We chose the Houses of Parliament because we think there are a lot of parallels between Trump’s politics and the U.K. government such as indefinite detention of migrants, and having very environmentally unfriendly policies.”

Britain is the only EU member without a statutory time limit on the detention of migrants, with thousands held in detention centers for months or years. This week, California Judge Dolly Gee rejected the Trump administration's request to detain migrant children long-term.

London Mayor Sadiq Khan gave his permission for the blimp to fly. A number of people in red jumpsuits and hi-vis yellow vests with the words “Trump babysitter” emblazoned on their backs stood guard inside the cordon that separated the blimp from the crowd.

“I want to stand up for democracy,” said Stephanie Inderbinen, 86, from London, who was holding a sign emblazoned with the words “Fascist Trump” in the location where "Trump Baby" was flying.

“I think (Trump) is destroying democracy, I think he wants to divide and rule, and he wants to support fascism, which is rising in Europe ... I think he’s a very dangerous person," she said.

Trump reportedly said he felt unwelcome in the British capital. Apart from staying in the U.S. ambassador’s residence in Regent’s Park and visiting the new U.S. Embassy, Trump is undertaking most of his engagements outside London.

“I used to love London as a city. I haven’t been there in a long time. But when they make you feel unwelcome, why would I stay there?" he reportedly told British tabloid The Sun in an interview published this week. "I guess when they put out blimps to make me feel unwelcome, no reason for me to go to London."

The Sun also reported that Trump warned May that her plans for keeping close trade ties with the European Union after Britain leaves the bloc in March next year would kill the possibility of a U.S.-U.K. trade deal. Britons voted 52% to 48% to leave the bloc at a referendum in 2016.

According to the Sun, Trump also went after Khan — London’s first Muslim mayor who he has feuded with in the past over a travel ban for people from several predominately Muslim states — saying he has done "a terrible job," and was soft on terrorism.

“He might not like the current president, but I represent the United States," Trump said, according to The Sun.

Khan questioned in an interview with the BBC on Friday why Trump was criticizing him and not the mayors of other European cities that have also been the victims of terrorism. 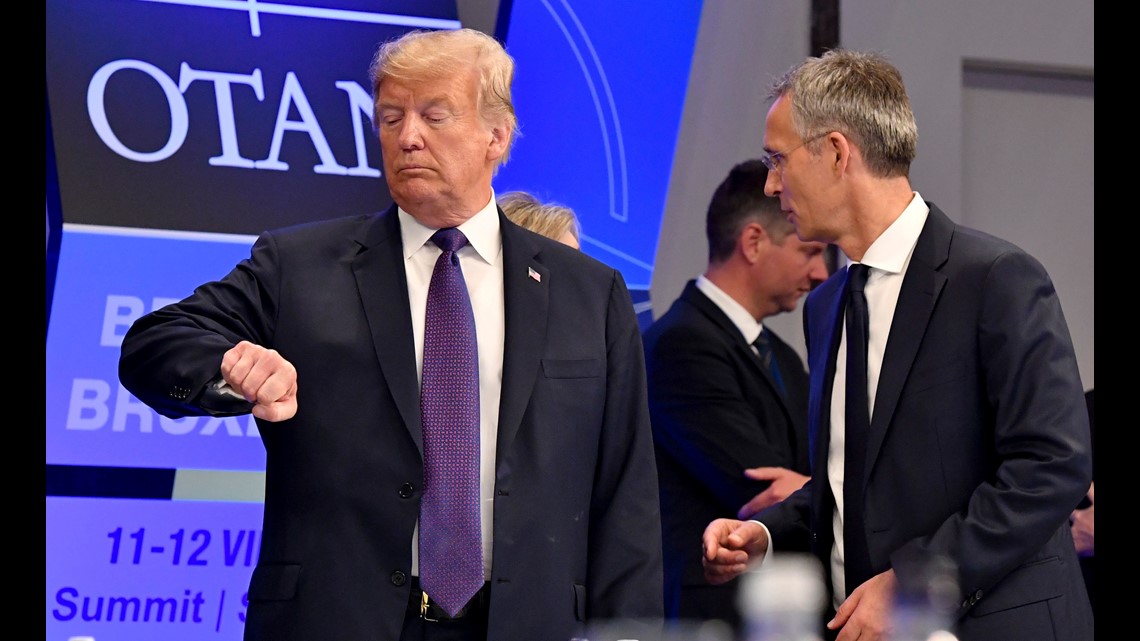 Ahead of the protests, Khan said in a statement: “I know Londoners are resolutely opposed to the politics of fear and despair. The U.S. has always stood by our side as a beacon for tolerance, openness and respect. This protest is not anti-American — far from it. Most of those marching on Friday will love the United States, just as I do.

“But having a special relationship means that we expect the highest standards from each other, and it also means speaking out when we think the values we hold dear are under threat.”