PHOENIX – Children in Border Patrol holding facilities "would vomit on their clothing" and had no soap to clean up.

One child "had diarrhea, had dry lips, he had a fever," but border agents declined to seek medical care and closed the cell door.

Children were told they could drink water from a sink, but "are not given any cups" nor soap to wash their hands.

Those allegations and many others, from families apprehended by Border Patrol agents, were included in a raft of legal filings in August 2018.

But concerns about migrant children becoming sick — and the lack of medical care for them in ill-equipped Border Patrol stations — were far from new.

More: We looked at every mile of the U.S.-Mexico border. Now you can, too

More: While the US debates caravans and wall, thousands of migrants are dumped in border cities

They had already been documented, in the same court case that establishes standards for how federal officials hold and release immigrant children.

Federal officials did not comment on the filings directly, but in an interview with The Arizona Republic, defended their handling of migrants and said border agents were not expected to be medical professionals.

Dec. 28: Two migrant children died this month. But the warning signs were documented long before that

The risk of illness for migrant children in custody, though, has been obvious to many who observed the system.

"As pediatricians, we say these detention centers are bad," said Dr. Colleen Kraft, the president of the American Academy of Pediatrics, which is now consulting with Homeland Security on providing better pediatric care. "They're cold, the lights are on 24/7, there are open toilets, and as a child, if you're not sick you can get sick."

Immigration Customs and Enforcement dropped off more than 100 migrants mostly from Guatemala at the Phoenix Greyhound bus station at 2115 E. Buckeye Road. Roberto Ramirez, 6, was in ICE custody with his father, Gaspa Ramirez. He claims that treatment by officers was bad and children were getting sick because of cold weather.
Nick Oza/The Republic

Of more than 200 documented cases of children in Border Patrol custody earlier this year, 1 of 6 reported children being sick, according to analysis of an Arizona Republic database of the legal filings.

As part of ongoing monitoring of the government's compliance with a legal settlement that safeguards immigrant children in federal custody, volunteer monitors from the Center for Human Rights and Constitutional Law, who were typically lawyers or law students, interviewed parents and unaccompanied children in June and July. They documented the accounts of 218 families or individual children.

Those declarations, the majority taken in Spanish and translated into English by the interviewers, were entered into the record of the long-running case in federal court known as "Flores."

According to lead counsel Peter Schey, attorneys for the plaintiffs submit filings when they believe the government is in breach of the so-called Flores settlement.

The families interviewed had been apprehended after crossing into Arizona, California, Texas and New Mexico, mostly from May through July.

The court filings redact the surnames of people involved but spell out a variety of health concerns.

Some described vomiting with little ability to clean up:

Some alleged that border agents denied requests for medical aid or withheld medications from detainees:

A 17-year-old immigrant reports not being given prescription medicine.
USA Today Handout

Some described a general lack of sanitation, access to clean water or generally healthy settings:

Kraft, the pediatrician, said both the conditions and the lack of medical professionals were causes for concern.

And agents themselves may not be able to gauge who needs medical attention.

Dec. 27: Two children have died in US border custody this month. Before that, none in a decade. Why now?

"You need special medical training to know whose mildly ill and whose severely ill, and if you don't have special training you can see children and think they're not really ill," Dr. Kraft said.

She said that even sick children may still be running around, but trained pediatricians would look for characteristics like increased heart rate, increased respiratory rate, and a decreased rate for capillaries to refill, which are signs that a child may be down a path to being very ill.

The 1997 settlement in the Flores case set limits on how long the federal government can detain unaccompanied minors. A judge later ruled that its terms also apply to migrant children who arrive with families.

CBP policy says they’re to be held in these facilities no longer than 72 hours before being transferred to a more “residential” detention facility, though families' stories show CBP frequently holds families for longer.

CBP officials were unable to speak to allegations from the Flores filings, saying the settlement is ongoing litigation but said clean water and medical care are required in the agency's 2015 policy on transportation, escort, detention and search of immigrants, known as "TEDS."

A Border Patrol official speaking on background to The Republic said facilities are required to maintain functioning drinking fountains and clean drinking cups. Across different facilities, these may be sinks, fountains, coolers or bottled water, and agents do hourly visual inspections when they would note availability of water and disposable cups.

The official said a person who needs medical care first gets assessed by an officer, who then would raise the concern to a medically trained professional such as an EMT, or a supervisor who can call 911.

"We do a quick assessment and if it's undetermined, immediately we call 911. We're not medical professionals, we're not trained to go through a series of checks," he said.

On Dec. 26, Nielsen announced that she had sought assistance from the Centers for Disease Control, the Coast Guard Medical Corps and the Department of Defense to provide medical expertise. She said, "all children in Border Patrol custody have been given a thorough medical screening."

Officials, in part, have blamed the Border Patrol facilities themselves. Many CBP buildings were originally designed for holding single adult males. More recently, officials say, the rise in the number of families crossing has strained those facilities.

Nielsen reiterated this idea. "In just two months into this fiscal year we have seen 68,510 family units and 13,981 unaccompanied children," she said in a statement. "This is a dramatic change from historical trends and has only become starker in December."

"As a result of bad judicial rulings from activist judges and inaction by Congress, we are seeing a flood of family units and unaccompanied alien children," she said.

Migrants and activists generally cite poverty and rising gang violence in Central America as the factor driving families toward the U.S. and say the Trump administration's efforts to clamp down asylum claims have caused more people to cross the border illegally in hopes of being released into the country.

The 218 declarations filed in the Flores case also describe conditions in Immigration and Customs Enforcement family detention centers, where families can be held for 20 days. But many discuss Border Patrol facilities, where people of all ages may be held initially after being caught.

'They can get very sick and die'

That's the scenario encountered by Jakelin Caal and her father, Nery Caal, who were held in a garage at the remote Antelope Wells Port of Entry, and Felipe Gómez Alonzo and his father Agustín Gómez, who were held near El Paso, then sent to a Border Patrol station at Alamogordo, N.M.

Parents and children in such facilities report sleeping on cement floors or cement benches, sometimes with a metallic blanket and occasionally with a thin mat.

Dr. Marsha Griffin is a professor of pediatrics with the University of Texas Rio Grande Valley who has been visiting detention facilities for a decade. She has visited the 1,500-person capacity Ursula facility in McAllen but said that she hasn’t been granted a visit in the past 10 months. 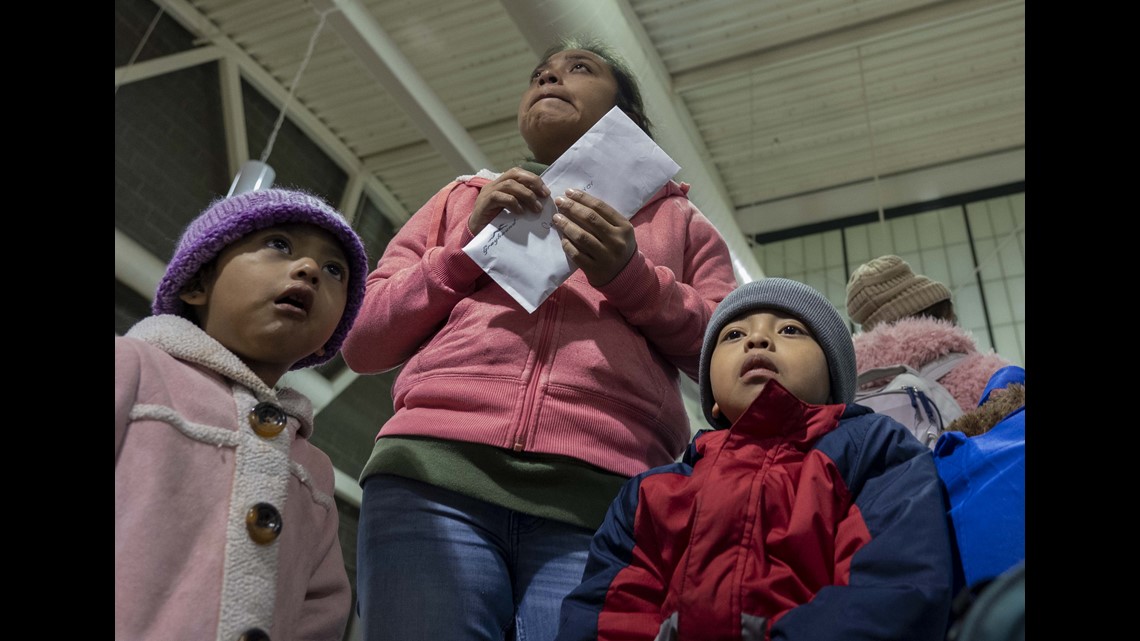 "To my knowledge, there's nobody walking around in the pods to check on people," Griffin said about Ursula facility. "They do have guards, but to date, no one that I know of has been trained in pediatric care, which is a problem because children are not little adults. They can get very sick and die."

Though little is known about the two children's deaths, the 8-year-old boy tested positive for influenza B, according to the New Mexico Office of the Medical Investigator.

The American Academy of Pediatrics, in addition to a dozen other national medical associations and societies, wrote in a letter to Nielsen and Border Patrol Commissioner Kevin McAleenan that recognizable symptoms of dehydration and shock in a child can be fatal, but also “recognizable and treatable by a trained professional.”

Leah Chavla, a policy advisor with the Women’s Refugee Commission has focused on the treatment of asylum seekers. After visiting Tijuana to observe the recent refugee caravan, she said she observed a lot of migrants with respiratory illnesses, which may stem from traveling for a long time and being exposed to weather elements, in addition to inadequate nutrition, stress and anxiety.

“While, yes, children may get sick while migrating, I still think an independent and thorough investigation is critical in both of these cases of deaths in CBP custody,” Chavla said.

Lydia Guzman, a Phoenix immigration activist, surveyed the scene at a Greyhound bus station where about 80 immigrant parents and children were dropped off Thursday. They were just the latest families to be released in a wave of migrants CBP says it can't hold; thousands more have been dropped off at local churches in recent months.

Guzman said complaints have been filed for years to DHS's Office of Civil Rights and Civil Liberties about mistreatment and medical denial in CBP facilities.

"Because of those cold cells, people are being discharged and deported with pneumonia — we know of a gentleman who died," Guzman said. "This is something that's been going on. It hasn't started with this administration."