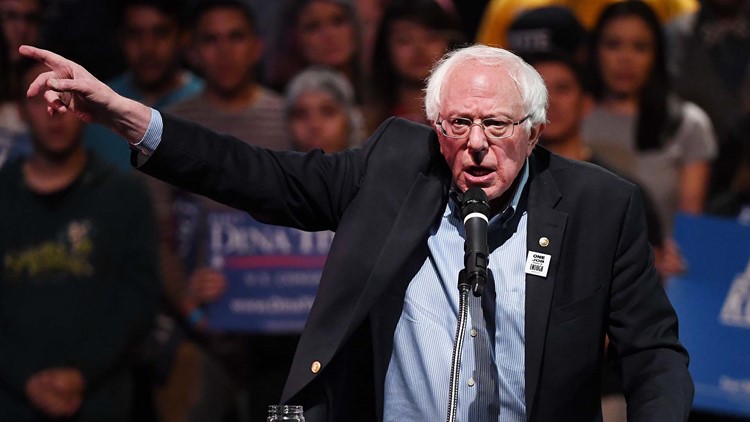 Photo by: Ethan Miller
U.S. Sen. Bernie Sanders (I-VT) speaks during a rally for Nevada Democratic candidates at the Las Vegas Academy of the Arts on October 25, 2018 in Las Vegas, Nevada. (Photo by Ethan Miller/Getty Images)

LAS VEGAS — Democratic presidential candidates expressed outrage Saturday that mass shootings have become chillingly common nationwide and blamed the National Rifle Association and its congressional allies after a gunman opened fire at a shopping area near the Texas-Mexico border.

"It's not just today, it has happened several times this week. It's happened here in Las Vegas where some lunatic killed 50 some odd people," Vermont Sen. Bernie Sanders said as he and 18 other White House hopefuls were in Nevada to address the nation's largest public employees union. "All over the world, people are looking at the United States and wondering what is going on? What is the mental health situation in America, where time after time, after time, after time, we're seeing indescribable horror."

Sanders blasted Republican Senate leadership for being "more concerned about pleasing the NRA than listening to the vast majority of the American people" and said that President Donald Trump has a responsibility to support commonsense gun safety legislation.

At least 20 people were killed amid back-to-school shopping in El Paso. A 21-year-old man was taken into custody, law enforcement officials said.

Shortly after the shooting and before its death toll was widely reported, White House officials said Trump had been briefed while spending the weekend at his New Jersey golf club. He conveyed his initial reaction on Twitter, writing that the shooting was "terrible" and that he was in close consultation with state officials. He turned to other topics, tweeting a note of encouragement to UFC fighter Colby Covington, a Trump supporter, and retweeting two messages that furthered his argument that African Americans had flourished under his administration.

Later Saturday night, Trump tweeted condolences. "Today's shooting in El Paso, Texas was not only tragic, it was an act of cowardice. I know that I stand with everyone in this Country to condemn today's hateful act. There are no reasons or excuses that will ever justify killing innocent people. Melania and I send our heartfelt thoughts and prayers to the great people of Texas."

The shooting was personal for former Rep. Beto O'Rourke, an El Paso native who represented the city in Congress for six years. He suspended campaigning to fly home and "be with my family and be with my hometown."

Earlier, O'Rourke appeared shaken as he told the union forum he'd heard early reports that the shooter might have had a military-style weapon, saying the country needs to "keep that (expletive) on the battlefield. Do not bring it into our communities."

O'Rourke said the U.S. may require direct action, urgency and in some cases nonviolent civil disobedience, to make real change.

"I believe in this country. I believe, at the end of the day, we're going to be able to get this done," he said, "but it's going to be because of those people who force it to get done."

"This is a sickness," Biden said. "This is beyond anything that we should be tolerating." He added: "We can beat the NRA. We can beat the gun manufacturers."

A visibly frustrated Minnesota Sen. Amy Klobuchar said: "I believe that the NRA have long dominated American politics to the point where they have stopped sensible legislation that would have prevented deaths and prevented killings. They have done it time and time again."

Mayor Pete Buttigieg of South Bend, Indiana, noted: "We are the only country in the world with more guns than people."

"It has not made us safer," he said. "We can respect the Second Amendment and not allow it to be a death sentence for thousands of Americans."

California Sen. Kamala Harris promised to use an executive action within her first 100 days of taking office to impose gun control. New Jersey Sen. Cory Booker said, "This has got to be a movement, politics or not, we've got to make ending this nightmare a movement before it happens to yet another community or another person dies."

Massachusetts Sen. Elizabeth Warren tweeted: "Far too many communities have suffered through tragedies like this already. We must act now to end our country's gun violence epidemic.