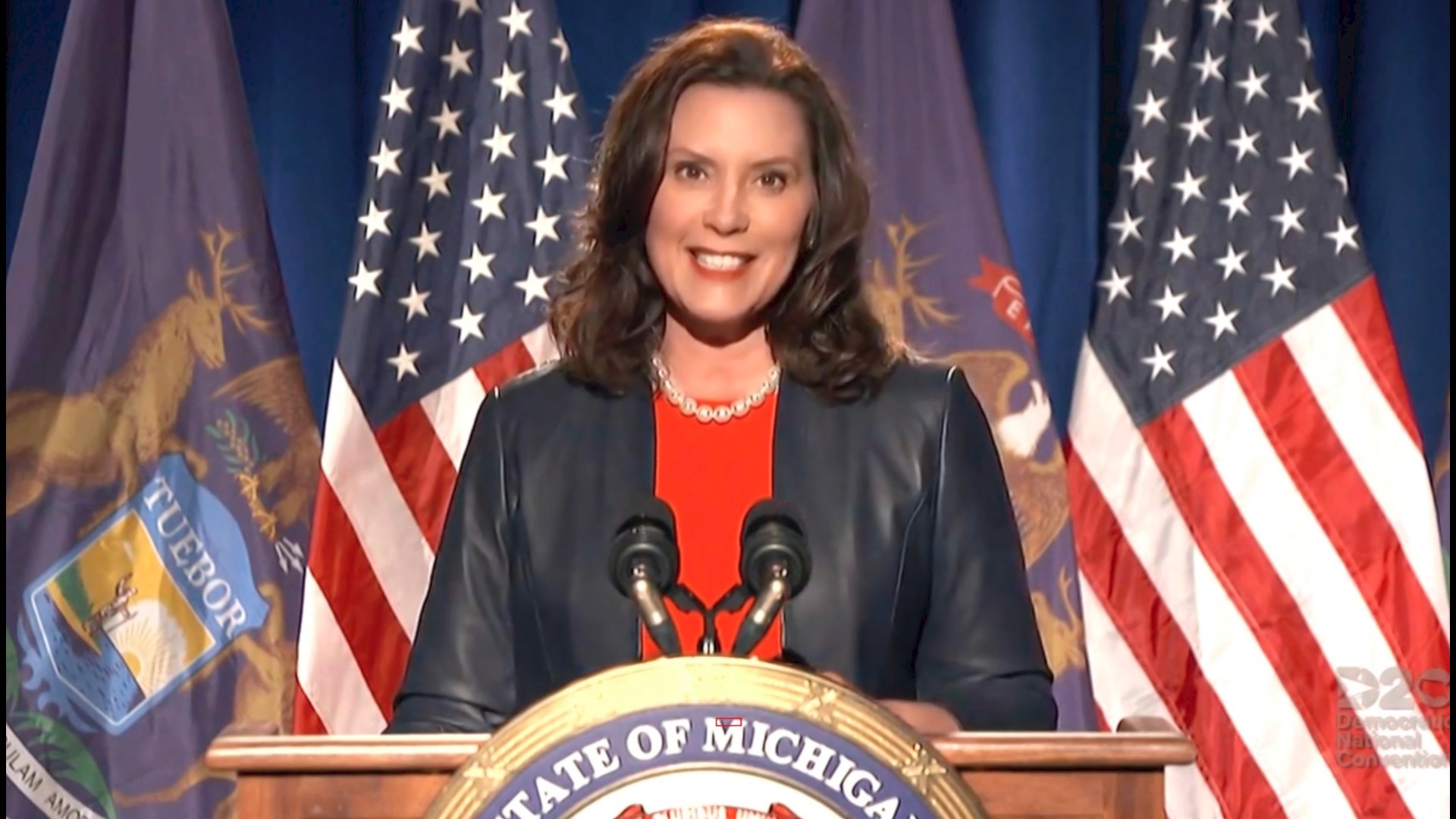 DETROIT — Agents foiled a stunning plot to kidnap Michigan Democratic Gov. Gretchen Whitmer, authorities said Thursday in announcing charges in an alleged scheme that involved months of planning and even rehearsals to snatch her from her vacation home.

Six men were charged in federal court with conspiring to kidnap the governor before the Nov. 3 elections in reaction to what they viewed as her “uncontrolled power,” according to a federal complaint. Separately, seven others linked to a paramilitary group called the Wolverine Watchmen were charged in state court for allegedly seeking to storm the Michigan Capitol and seek a “civil war.”

The two groups trained together and planned “various acts of violence,” according to the state police.

Surveillance for the kidnapping plot took place in August and September, according to an FBI affidavit, and four of the men had planned to meet Wednesday to “make a payment on explosives and exchange tactical gear.”

The FBI quoted one of the men as saying Whitmer “has no checks and balances at all. She has uncontrolled power right now. All good things must come to an end."

RELATED: Plot to kidnap Gov. Whitmer, have her stand trial for treason, revealed

Authorities said the plots were stopped with the work of undercover agents and informants. The men were arrested Wednesday night. The six charged in federal court face up to life in prison if convicted. The state terrorism charges the other seven men face carry a possible 20-year sentence.

Andrew Birge, the U.S. attorney in western Michigan, called the men “violent extremists.” They discussed detonating explosive devices — including under a highway bridge — to divert police from the area near Whitmer's vacation home and Fox bought a Taser for use in the kidnapping, Birge said.

“All of us in Michigan can disagree about politics, but those disagreements should never, ever amount to violence. Violence has been prevented today,” Detroit U.S. Attorney Matthew Schneider told reporters.

A few hours later, Whitmer pinned some blame on President Donald Trump, noting that he did not condemn white supremacists in last week’s debate with Joe Biden and instead told a far-right group to “stand back and stand by.”

“Hate groups heard the president’s words not as a rebuke but as a rallying cry, as a call to action,” Whitmer said.

Hours later, Trump fired back on Twitter, saying Whitmer was ungrateful and demanded she reopen the state.

"My Justice Department and Federal Law Enforcement announced today that they foiled a dangerous plot against the Governor of Michigan. Rather than say thank you, she calls me a White Supremacist—while Biden and Democrats refuse to condemn Antifa, Anarchists, Looters and Mobs that burn down Democrat run cities," Trump tweeted.

Governor Whitmer of Michigan has done a terrible job. She locked down her state for everyone, except her husband’s boating activities. The Federal Government provided tremendous help to the Great People of Michigan. My Justice Department and Federal Law Enforcement announced...

...I do not tolerate ANY extreme violence. Defending ALL Americans, even those who oppose and attack me, is what I will always do as your President! Governor Whitmer—open up your state, open up your schools, and open up your churches!

Whitmer, who was considered as Biden's running mate and is nearly halfway through a four-year term, has been widely praised for her response to the coronavirus but also sharply criticized by Republican lawmakers and people in conservative areas of the state. The Capitol has been the site of many rallies, including ones with gun-toting protesters calling for her ouster.

Whitmer put major restrictions on personal movement and the economy, although many of those limits have been lifted since spring. The governor has exchanged barbs with Trump on social media, with the president declaring in April, “LIBERATE MICHIGAN!”

There is no indication in the criminal complaint that the men were inspired by Trump. Authorities also have not publicly said whether the men were angry about Whitmer's coronavirus orders.

The criminal complaint identified the six accused in the plot against Whitmer as Adam Fox, Ty Garbin, Kaleb Franks, Daniel Harris, Brandon Caserta, all of Michigan, and Barry Croft of Delaware. All but Croft appeared Thursday in federal court in Grand Rapids. They asked for court-appointed lawyers and were returned to jail to await detention hearings Tuesday.

Fox, who was described as one of the leaders, was living in the basement of a vacuum shop in Grand Rapids. The owner said Fox was opposed to wearing a mask during the pandemic and kept firearms and ammunition at the store.

“He was anti-police, anti-government," Brian Titus told WOOD-TV. “He was afraid if he didn’t stand up for the Second Amendment and his rights that the country is going to go communism and socialism.”

The government said the plot against Whitmer appeared to have roots in a June gathering in Dublin, Ohio, attended by more than a dozen people from several states, including Croft and Fox.

“The group talked about creating a society that followed the U.S. Bill of Rights and where they could be self-sufficient,” the FBI affidavit said. “They discussed different ways of achieving this goal from peaceful endeavors to violent actions. ... Several members talked about murdering ‘tyrants’ or 'taking' a sitting governor.”

They were identified as Paul Bellar, 21, of Milford; Shawn Fix, 38, of Belleville; Eric Molitor, 36, of Cadillac; Michael Null, 38, of Plainwell; William Null, 38, of Shelbyville; Pete Musico, 42, and Joseph Morrison, 26, who live together in Munith. According to the affidavit, Musico and Morrison are founding members of the Wolverine Watchmen, which authorities described as “an anti-government, anti-law enforcement militia group.”

At least three of the 13 defendants were among some armed demonstrators who entered the Senate gallery on April 30 following a larger protest outside the Capitol against Whitmer's stay-at-home order, said Nessel spokeswoman Kelly Rossman-McKinney. At the time, a senator said the men shouted down at senators who were meeting amid debate over extending the governor's emergency declaration. The identities of the three men were not immediately available.

The Watchmen have met periodically for firearms and tactical training in remote areas “to prepare for the ‘boogaloo,’ a term referencing a violent uprising against the government or impending politically motivated civil war,” state police Det. Sgt. Michael Fink wrote in an affidavit.

Some boogaloo promoters insist they are not genuinely advocating for violence. But the boogaloo has been linked to a recent string of domestic terrorism plots, including the arrests of three Nevada men accused of conspiring to incite violence during protests in Las Vegas.

Boogaloo supporters have shown up at protests against COVID-19 lockdown orders and racial injustice, carrying rifles and wearing tactical gear over Hawaiian shirts.

Michigan became known for anti-government paramilitary activity in the mid-1990s, when a number of loosely affiliated groups began organizing and training in rural areas. They used short-wave radio, newsletters and early internet connections to spread a message of resistance to what they contended was a conspiracy to impose world government and seize guns.

They gained notoriety after reports surfaced that Timothy McVeigh and Terry Nichols, convicted in the 1995 bombing of the Oklahoma City federal building, had met with group members, although their connections were murky.

“That old militia world is still there, but kind of long in tooth,” said J.J. MacNab, a fellow at George Washington University’s Program on Extremism.

Nonetheless, rallies at the Michigan Capitol against Whitmer’s shutdown orders were recruiting events for such groups, said MacNab, who monitors their social media activity.