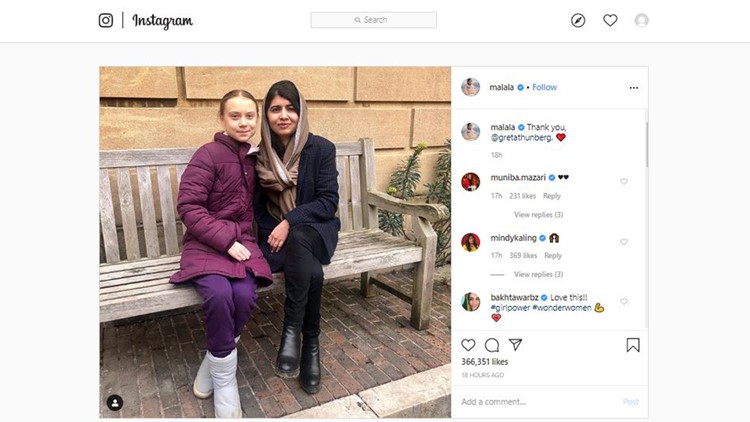 OXFORD, UK — Teen climate activist Greta Thunberg met up with Nobel Peace Prize winner Malala Yousafzai Tuesday. Yousafzai shared a photo of their encounter on Instagram, sitting on a bench at Great Britain's University of Oxford with their arms around each other, The Guardian reports.

“Thank you, @gretathunberg," Yousafzai wrote, accompanied by a heart emoji.

Thunberg, 17, is reportedly in the United Kingdom to take part in a climate school strike on Friday. She launched a global movement nearly two years ago when she sat, alone, outside Swedish parliament demanding the government take immediate steps to battle climate change. Since then, kids around the world have taken part in Friday strikes from school to spread the word.

Yousafzai, 22, became famous after she was threatened by the Pakistan and later shot for demanding girls be allowed to go to school. She won the peace prize at 17, the youngest-ever recipient.

Thunberg was nominated last year and is again nominated in 2020. She was named TIME Person of the Year in 2019.

RELATED: TIME names Greta Thunberg as Person of the Year 2019