The killing of President Jovenel Moïse early Wednesday, and the wounding of his wife, was sure to bring more chaos to the unstable Caribbean country. 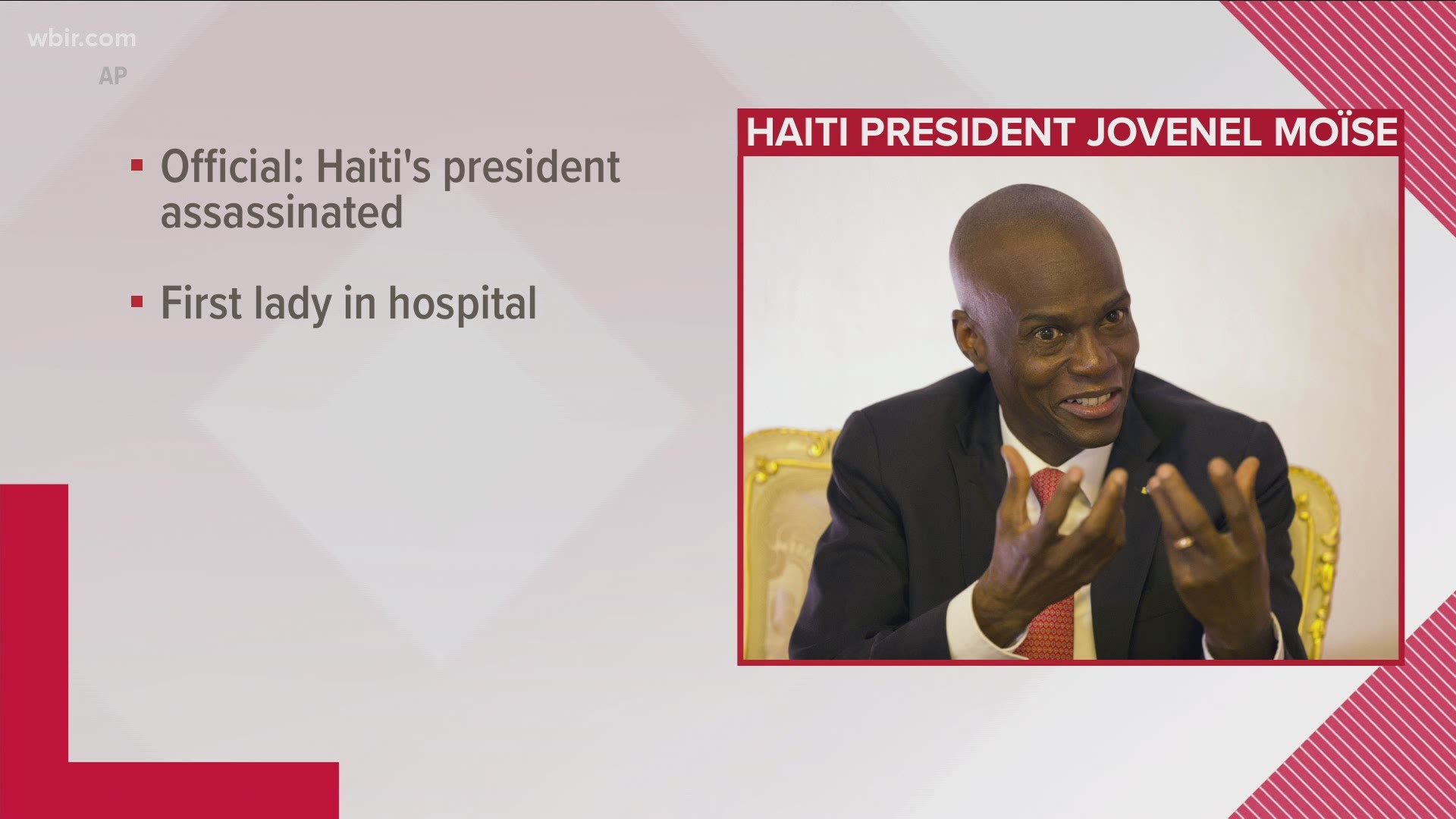 The killing of Moïse early Wednesday, and the wounding of his wife, was sure to bring more chaos to the unstable Caribbean country already beset by gang violence, soaring inflation and protests by opposition supporters who accused Moïse of increasing authoritarianism.

Interim Prime Minister Claude Joseph said the police and military were in control of security. The poorest country in the Americas, Haiti has a history of dictatorship and political upheaval. The streets of Port-au-Prince were empty and quiet.

THIS IS A BREAKING NEWS UPDATE. The previous AP story is below

Credit: AP
In this Feb. 7, 2020, file photo, Haiti's President Jovenel Moise speaks during an interview at his home in Petion-Ville, a suburb of Port-au-Prince, Haiti. (AP Photo/Dieu Nalio Chery, File)

A squad of gunmen assassinated Haitian President Jovenel Moïse and wounded his wife in an overnight raid on their home Wednesday, inflicting more chaos on the Caribbean country that was already enduring gang violence, soaring inflation and protests of his increasingly authoritarian rule.

Interim Prime Minister Claude Joseph, who confirmed the killing, said the police and military were in control of security in Haiti, the poorest country in the Americas where a history of dictatorship and political upheaval have long stymied the consolidation of democratic rule.

In an interview with The Associated Press, Joseph called for an international investigation into the assassination, said that elections scheduled for later this year should be held and pledged to work with Moïse's allies and opponents alike.

“We need every single one to move the country forward,” Joseph said. He alluded to enemies of the president, describing him as ‘’a man of courage'' who had opposed ‘’some oligarchs in the country, and we believe those things are not without consequences.''

Despite Joseph’s assurances that order would prevail, there was confusion about who should take control and widespread anxiety among Haitians. Authorities declared a “state of siege” in the country and closed the international airport.

The normally bustling streets of the capital, Port-au-Prince, were empty Wednesday. Sporadic gunshots were heard in the distance, public transportation was scarce, and some people searched for businesses that were open for food and water.

Bocchit Edmond, the Haitian ambassador to the United States, said the attack on the 53-year-old Moïse "was carried out by foreign mercenaries and professional killers — well-orchestrated,” and that they were masquerading as agents of the U.S. Drug Enforcement Administration. The DEA has an office in the Haitian capital to assist the government in counternarcotics programs, according to the U.S. Embassy.

Moïse's wife, Martine, was in stable but critical condition and was being moved to Miami for treatment, Edmond said in Washington.

Haiti has asked the U.S. government for assistance with the investigation, he said, adding that the assassins could have escaped over the land border to the Dominican Republic or by sea.

The Dominican Republic said it was closing the border and reinforcing security in the area, describing the frontier as ″completely calm.″

Haiti appeared to be heading for fresh volatility ahead of general elections later this year. Moïse had been ruling by decree for more than a year after failing to hold elections, and the opposition demanded he step down in recent months, saying he was leading it toward yet another grim period of authoritarianism.

It was a testament to Haiti’s fragile political situation that Joseph, a protege of Moïse who was only supposed to be prime minster temporarily, found himself in charge.

But Haiti appears to have few other options. The Supreme Court’s chief justice, who might be expected to help provide stability in a crisis, died recently of COVID-19.

The main opposition parties said they were greatly dismayed about the killing.

“In this painful circumstance, the political forces of the opposition condemn with utmost rigor this heinous crime that is at odds with democratic principles,” their statement said.

The parties added that they hope the National Police will take all necessary measures to protect lives and property, and they called on Haitians to be “extremely vigilant.”

Joseph is likely to lead Haiti for now, though that could change in a nation where constitutional provisions have been erratically observed, said Alex Dupuy, a Haiti-born sociologist at Wesleyan University in Middletown, Connecticut.

The best scenario would be for the acting prime minister and opposition parties to come together and hold elections, Dupuy said.

“But, in Haiti, nothing can be taken for granted. It depends how the current balance of forces in Haiti plays out,” he said, describing the situation as dangerous and volatile. Haiti's police force is already grappling with a recent spike in violence in Port-au-Prince that has displaced more than 14,700 people, he said.

Former President Michel Martelly, whom Moïse succeeded, called the assassination “a hard blow for our country and for Haitian democracy, which is struggling to find its way.”

U.S. President Joe Biden said he was “shocked and saddened to hear of the horrific assassination,” and condemned “this heinous act.”

“The United States offers condolences to the people of Haiti, and we stand ready to assist as we continue to work for a safe and secure Haiti,” Biden said in a statement.

U.N. Secretary-General Antonio Guterres also condemned the assassination and stressed that “the perpetrators of this crime must be brought to justice,” U.N. spokesman Stephane Dujarric said. The Security Council scheduled an emergency closed meeting on Haiti for Thursday.

Governments in Latin America, the Caribbean, Europe and elsewhere also expressed their concern at Haiti’s plight.

A resident who lives near the president’s home said she heard the attack.

“I thought there was an earthquake, there was so much shooting,” said the woman, who spoke on condition of anonymity because she fears for her life. “The president had problems with many people, but this is not how we expected him to die.”

The U.S. Embassy in Haiti said it was restricting U.S. staff to its compounds and closed the embassy Wednesday.

It’s too early to know exactly what will happen next, said Jonathan Katz, who previously covered Haiti for the AP and wrote a book about the country’s devastating earthquake.

“It seems to be a pretty well-financed operation,” he said, adding it could take days to piece together what happened. “That’s the question: Who’s behind it and what do they want?”

Moïse was killed a day after he nominated Ariel Henry, a neurosurgeon, as the new prime minister. Joseph took over the job of interim prime minister in April following the resignation of the previous premier, Joseph Jouthe — the latest in a revolving door of prime ministers.

In the AP interview, Joseph said he had spoken three times with Henry and that there was agreement he was in charge for now.

“He was actually designated but never took office,” Joseph said of Henry. “I was the one who was a prime minister, who was in office. This is what the law and the constitution says.”

However, in a separate AP interview, Henry appeared to contradict Joseph. “It’s an exceptional situation. There is a bit of confusion,” he said. “I am the prime minister in office.”

Haiti's economic, political and social woes have deepened recently, with gang violence spiking in Port-au-Prince, inflation spiraling, and food and fuel becoming scarcer in a country where 60% of the population makes less than $2 a day. These troubles come as Haiti is still trying to recover from the devastating 2010 earthquake and Hurricane Matthew in 2016.

Opposition leaders accused Moïse of seeking to increase his power, including by approving a decree that limited the powers of a court that audits government contracts and another that created an intelligence agency that answers only to the president.

He had faced large protests in recent months that turned violent as opposition leaders and their supporters rejected his plans to hold a constitutional referendum with proposals that would strengthen the presidency.

In recent months, opposition leaders demanded he step down, arguing that his term legally ended in February 2021. Moïse and supporters maintained that his term began when he took office in early 2017, following a chaotic election that forced the appointment of a provisional president to serve during a year-long gap.

In May, U.S. Homeland Security Secretary Alejandro Mayorkas announced an 18-month extension of temporary legal status for Haitians living in the U.S., citing “serious security concerns (in Haiti), social unrest, an increase in human rights abuses, crippling poverty, and lack of basic resources, which are exacerbated by the COVID-19 pandemic.”

The reprieve benefited an estimated 100,000 people who came after the devastating 2010 earthquake and are eligible for Temporary Protected Status, which gives haven to people fleeing countries struggling with civil strife or natural disasters.

This story has been updated to correct that Moïse ruled by decree for more than a year, not more than two years.