There will be a procession as the articles are marched from the House, across the Rotunda to the Senate. 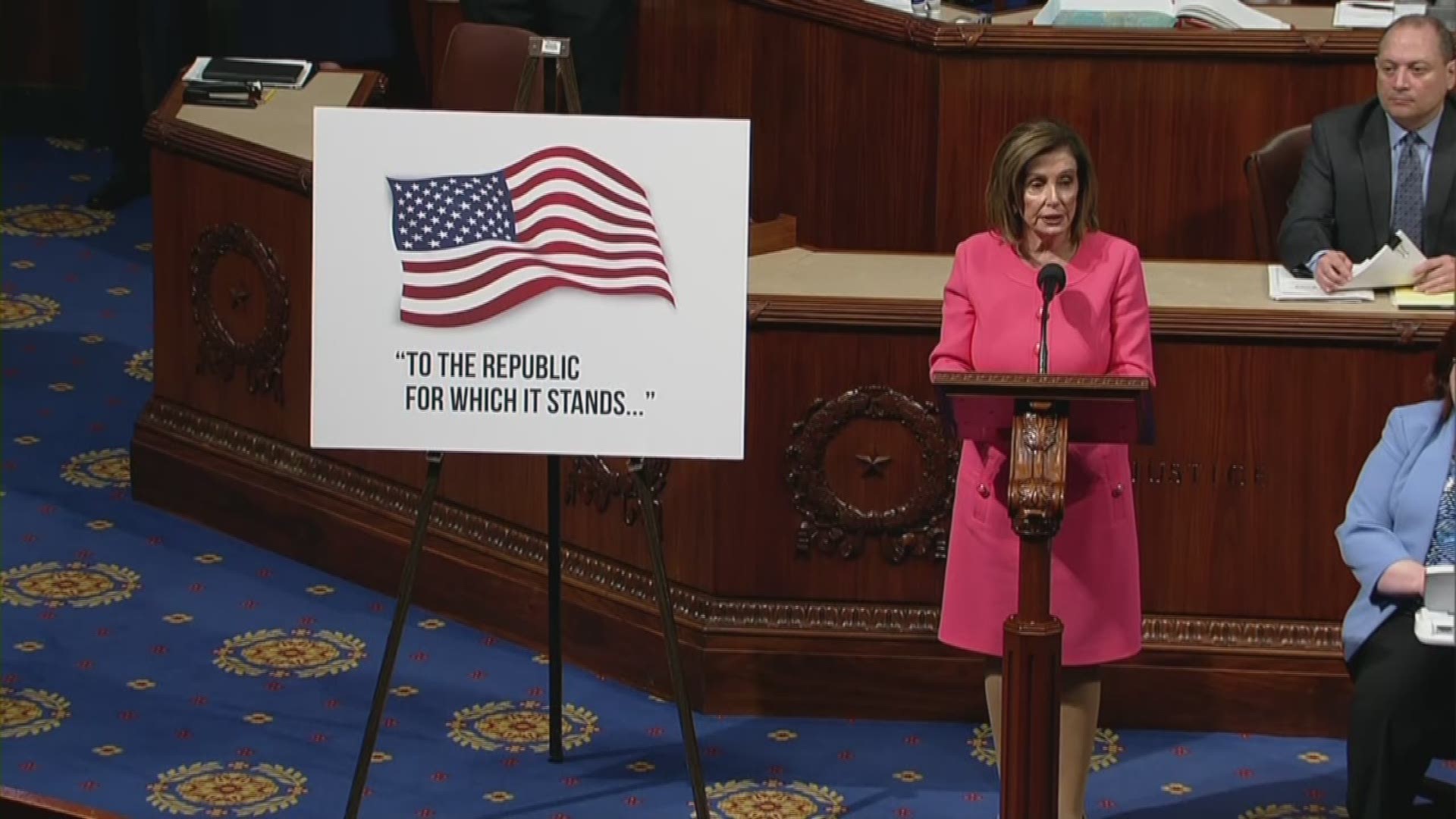 WASHINGTON — House Speaker Nancy Pelosi has signed the articles of impeachment against President Donald Trump and they're now being transferred over to the Senate for trial.

The House of Representatives voted 228-193 on Wednesday to send the articles of impeachment against Trump to the Senate. The move will launch a landmark trial to decide whether the charges of abuse of power and obstruction of Congress are grounds for removal from the White House.

Minnesota Democrat Collin Peterson was the only House Democrat to vote no on sending the articles to the Senate.

House managers named to prosecute the case by Pelosi will now walk the articles across the Capitol in a dramatic evening procession.

The White House released a statement criticizing the naming of those managers saying, "the only thing Speaker Pelosi has achieved with this sham, illegitimate impeachment process, is to prove she is focused on politics instead of the American people."

Wednesday morning, Pelosi unveiled who would be the impeachment managers representing Democrats in the Senate trial.

In that statement Wednesday the White House said, "the Speaker lied when she claimed this was urgent and vital to national security because when the articles passed, she held them for an entire month in an egregious effort to garner political support. She failed and the naming of these managers does not change a single thing."

RELATED: Ahead of impeachment trial, Trump suggests not having it

According to The Associated Press, after the House officially votes to send the articles to the Senate, the entire prosecution team will line up behind House Sergeant-at-Arms Paul Irving and House Clerk Cheryl Johnson, who will be holding the articles. The procession will walk, two by two, through National Statuary Hall, past Pelosi’s office, across the Rotunda and to the doors of the Senate. The articles will be handed to Secretary of the Senate Julie E. Adams.

The Senate is expected to transform into an impeachment court as early as Thursday, but Senate Majority Leader Mitch McConnell says he expects the trail to start in earnest on Tuesday.

The Constitution calls for the Chief Justice of the Supreme Court, in this case John Roberts, to preside over the senators who serve as jurors. The senators will have to swear an oath to deliver "impartial justice" -- something that has come under scrutiny after McConnell said publicly last month "I'm not impartial about this at all.”

Senate rules say the trial will run six days a week, but not Sundays. Senators reportedly could vote to change that schedule. The trial rules also state that senators must stay off their phones.

There are enough Republican senators who have indicated they will not be in favor of dismissing the trial, but it remains to be seen if any witnesses will be called. Former national security adviser John Bolton has said he will testify if subpoenaed.

There are four Republican senators and four Democratic senators in particular to keep an eye on.

On the GOP side, they are Susan Collins of Maine, Mitt Romney of Utah, Lisa Murkowski of Alaska and Lamar Alexander of Tennessee. A 51-vote majority is needed to approve the calling of witnesses. If all Democrats and independents vote in favor, they need four Republicans to come over. These are the most likely ones.

On the Democratic side, the ones to watch are presidential candidates Elizabeth Warren of Massachusetts, Bernie Sanders of Vermont, Amy Klobuchar of Minnesota and Michael Bennet of Colorado. They are required to be at the trial, which means they will be taken off the campaign trail less than two weeks before the first primary votes are cast in the Iowa caucuses. Sanders and Warren are among the four front runners in the most recent Iowa polls. Klobuchar is trailing them and Bennet is barely registering in any state or national polls.