Rapinoe stands by statement about not going to White House

The U.S. women's soccer player says she stands by her comments about a presidential visit if the national team wins the World Cup. 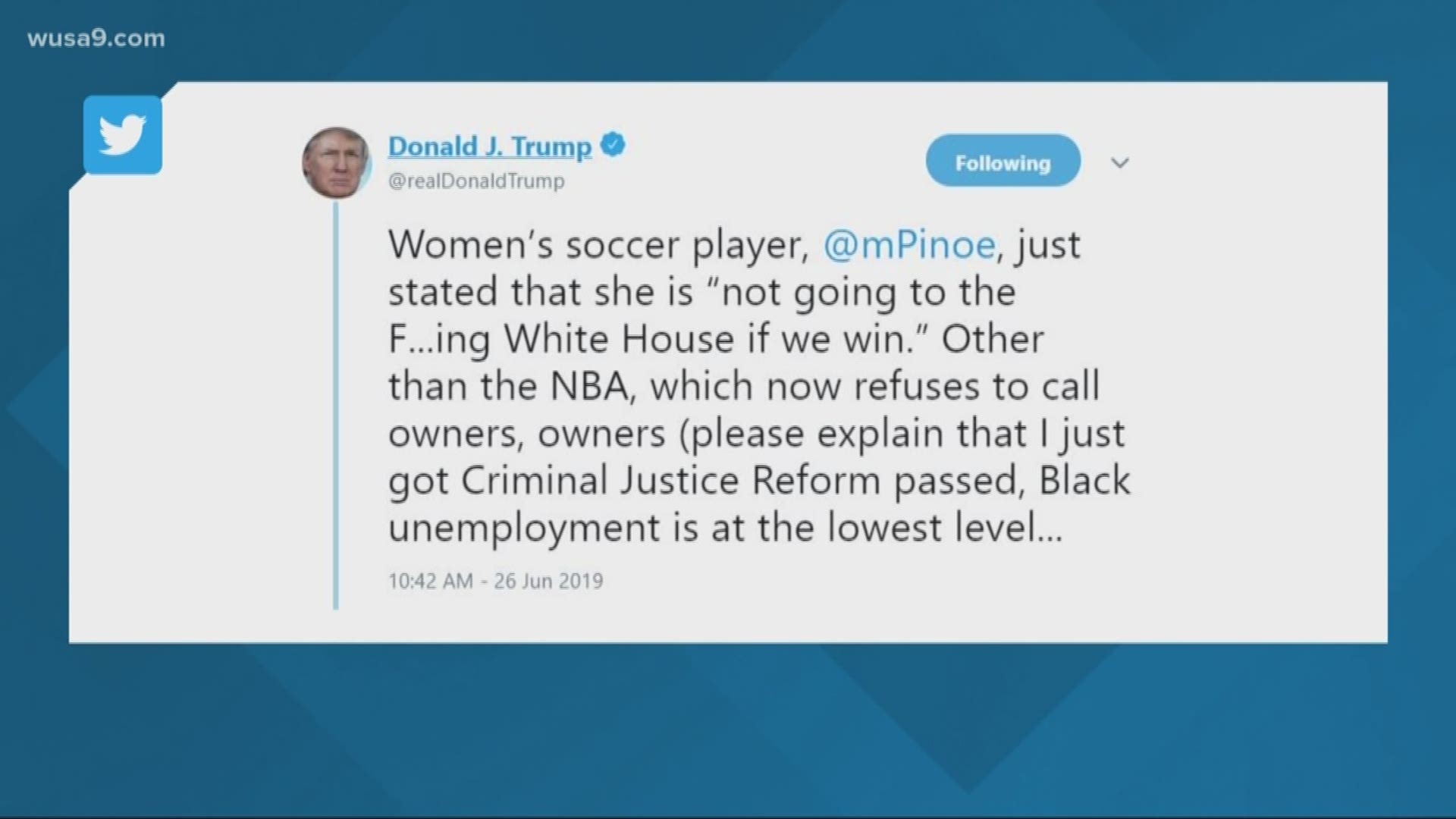 PARIS, France — Megan Rapinoe said Thursday that she stands by previous comments that she would not visit the White House if the United States wins the Women's World Cup.

"I stand by the comments that I made about not wanting to go to the White House, with the exception of the expletive," she said. "My mom would be very upset about that."

Rapinoe spoke at a previously scheduled news conference a day after President Donald Trump called out the U.S. women's national team star on Twitter. Trump referenced a video that surfaced on Twitter in recent days, posting: "Megan should never disrespect our Country, the White House, or our Flag, especially since so much has been done for her & the team."

Trump said he would invite the U.S. team "win or lose."

Earlier in the week, Trump had also told The Hill that it wasn't appropriate for Rapinoe to protest during the national anthem.

Rapinoe's initial comments were made during an interview for a magazine in January in which she was asked if she was excited about the prospect of going to the White House. In a video excerpt of the interview posted Tuesday, she can be seen using a profanity when she says she's not going. She also expressed doubts the team would be invited.

U.S. coach Jill Ellis said she didn't feel the controversy over the comments would be a distraction for the team, which is preparing for Friday night's quarterfinal match against France.

"I think this team has a remarkable focus. We all support Megan. She knows that. We know we have each other's backs in there," Ellis said. "I think for our players, there's only one purpose, one mission, why we're here. Comments, media, whatever, it has always been something I think we can block out pretty easily."

Rapinoe also said she didn't believe the comments would be divisive on the team.

"We're very open with each other, obviously everyone knows who I am. I didn't make the comments at a press conference here. They were made months ago, just kind of resurfacing," she said. "I think, if anything, it just fires everybody up a little bit more."

Rapinoe started kneeling during the anthem in 2016 to show solidarity with former San Francisco 49ers quarterback Colin Kaepernick, who did it before NFL games to protest social and racial injustice. But the United States Soccer Federation then adopted a policy that requires players to stand.

Now she stands, but she has been criticized for not singing and putting her hand over her heart like other players.

Rapinoe, who is gay, has also frequently spoken out about politics and has criticized the Trump administration and its policies in the past.

"Considering how much time and effort and pride we take in the platform that we have, in using it for good and for leaving the game in a better — and hopefully the world in a better place — I don't think that I would want to go," she said Thursday, "and I would encourage my teammates to think hard about lending that platform or having that co-opted by an administration that doesn't feel the same way, doesn't fight for the same things that we fight for."

Teammate Ali Krieger tweeted in support of Rapinoe, saying that she, too, would skip a White House visit.

"I don't support this administration nor their fight against LGBTQ+ citizens, immigrants & our most vulnerable," Krieger posted.

Alex Morgan told Time Magazine last month that she would not visit the White House if the U.S. team was invited. "I don't stand for a lot of things the current office stands for," Morgan said, pointing particularly to the family separation policy at the southern border.