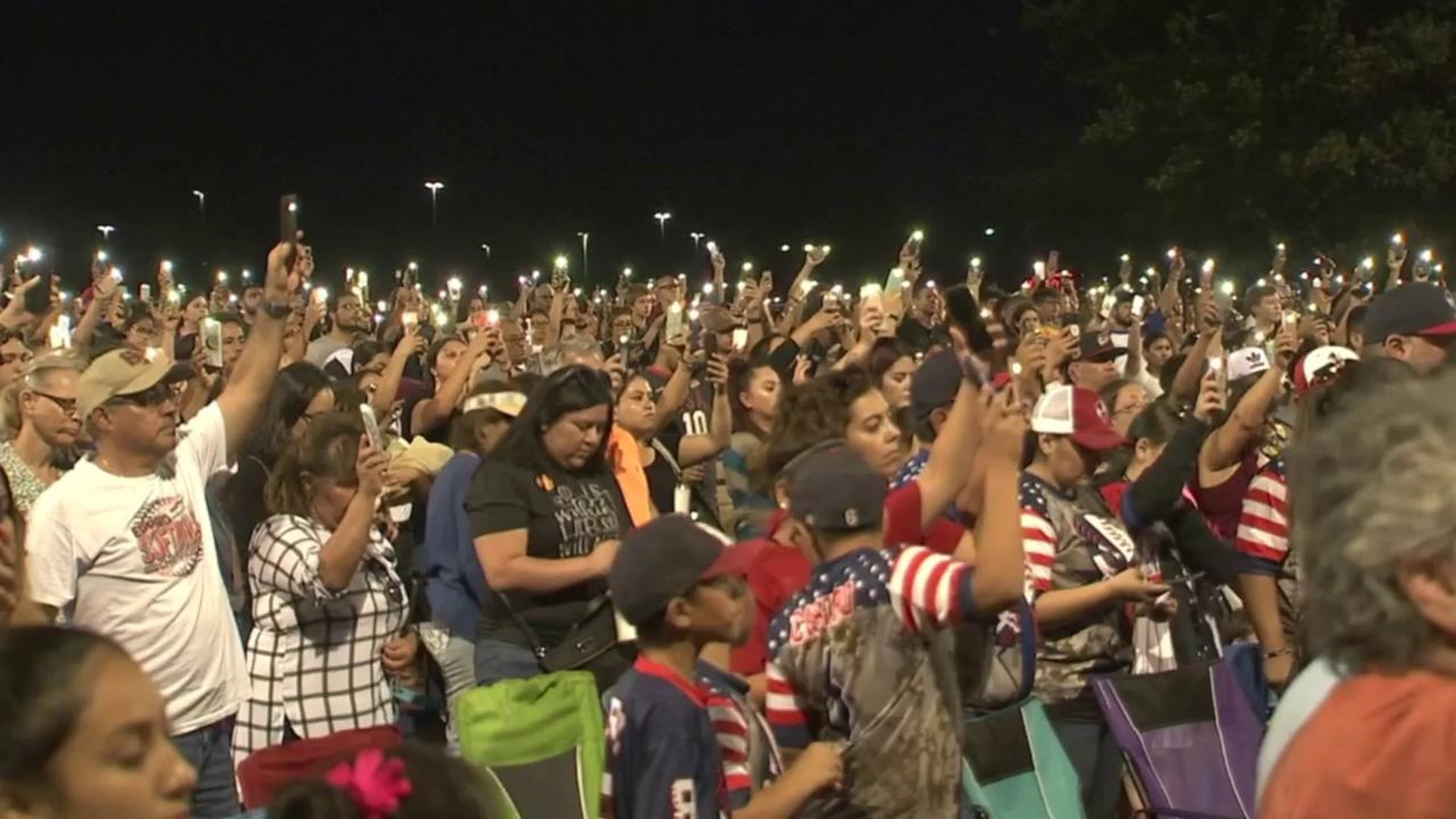 In the aftermath of the back-to-back shooting massacres in Texas and Ohio, the debate over gun control has returned to the National Rifle Association and its immense power to stymie any significant legislation on the issue.

The man largely responsible for the NRA's uncompromising stance is its decades-long CEO, Wayne LaPierre, who has been engulfed in turmoil and legal issues as he orchestrates the group's latest effort to push back against gun control measures.

Law enforcement authorities are investigating the NRA's finances, and the gun group has ousted top officials and traded lawsuits with the longtime marketing firm credited with helping to shape LaPierre's and the NRA's image.

LaPierre's seven-figure salary, penchant for luxury clothing shopping sprees and reports that he sought to have the NRA buy him a $6 million mansion at an exclusive golf community have drawn considerable scrutiny amid allegations of rampant misspending.

Ardent gun rights supporters have turned on LaPierre in recent months, taking to Twitter and Facebook with the hashtags #changethenra and #savethe2a. Some are calling for his resignation and questioning how he can turn the tide against the push for more robust gun control measures after the Dayton, Ohio, and El Paso, Texas, rampages, given all the scandals.

"They've done so much damage to their reputation that the effectiveness of any NRA statements in really swaying opinion has to be considered diminished," said Rob Pincus, a longtime NRA member and firearms instructor who is among the leaders of a group formed to change the NRA that has called for LaPierre's resignation. "Anything that gets said by Wayne LaPierre is going to be followed by 'amidst turmoil over $300,000 in suits and a $6 million mansion they were going to buy him,' and all these other allegations that are out there."

The NRA has abided by its usual reaction after mass shootings — initially saying nothing followed by a muted response. In this case, its lead spokesman said it would not "participate in politicizing these tragedies" and remained committed to the "safe and lawful use of firearms by those exercising their Second Amendment freedoms."

Behind the scenes, however, there's evidence of LaPierre's pull. The Washington Post reported that LaPierre warned President Donald Trump after he expressed support for a background check bill that such a move would be unpopular among Trump's supporters, according to officials who spoke on the condition of anonymity to discuss the talks. The NRA would neither confirm nor deny the report.

LaPierre, who rarely speaks to mainstream media outlets, declined requests to be interviewed. In a written statement issued Thursday, he said none of the gun control proposals being discussed would have prevented the most recent attacks.

"Worse, they would make millions of law abiding Americans less safe and less able to defend themselves and their loved ones," the statement said. He described many of the proposals as "soundbite solutions" that "fail to address the root of the problem, confront criminal behavior or make our communities safer."

To learn how LaPierre accumulated such vast power in both the NRA and American politics while remaining an enigma outside the closed-off world of the gun-rights organization, The Associated Press interviewed dozens of current and former staffers and members who have worked with him.\

LaPierre's public persona is as the hard-fisted leader of the NRA, the public face of the Second Amendment with his bombastic defense of guns, freedom and country.

Behind the scenes, however, the 69-year-old CEO's current and former associates see a different man.

The LaPierre they know is an introvert who rarely roams the halls of NRA headquarters to interact with staffers. He's not even considered a serious "gunner."

In fact, LaPierre's early career included working for Democratic lawmakers in Virginia, where he spent most of his childhood. He's said to have been in line to work for liberal icon and then-Democratic House leader Tip O'Neill until the NRA came calling in 1977.

Pro-gun activist Jeff Knox tells a story about how his father, Neal Knox, a former top lobbyist at the NRA, brought LaPierre to a gun range outside Washington early in his NRA career. LaPierre pulled out a rusty shotgun and the elder Knox, appalled by its condition, removed the dipstick from his Cadillac and used the oil to wipe off the rust.

"Wayne was like 'What? What's the big deal?'" said Knox, whose father, now deceased, lost a battle with LaPierre for control of the NRA. LaPierre became the group's CEO in 1991.

"He's gotten some nice guns since then, but I wouldn't call him a gun guy," Knox said. "I think he's a true believer, but I don't think he quite gets it. ... It's always been business and political to him, where to Dad it was almost a religion. It was a calling."

Richard Feldman, a former NRA lobbyist and author of "Ricochet: Confessions of a Gun Lobbyist," recalls that during congressional hearings, he and other NRA lobbyists would sit together to observe the proceedings while LaPierre, carrying big yellow legal pads, would sit in the back and wave people away.

"He was really like the professor. His office was just chock-full of papers and books all over the place," Feldman said. "He never looked like the kind of guy who would end up" CEO of the NRA.

LaPierre went on to become a powerful leader, surviving several internal NRA political skirmishes that lately have been worthy of a "Game of Thrones" subplot.

He also successfully navigated the Washington political landscape and helped create a culture in which Republicans don't dare touch gun-control measures, even after massacres of children.

He's credited with working to end the decade-long ban on assault weapons that expired in 2004. More recently, the NRA spent $30 million helping to elect Trump.

Yet, it's been a rough road since Trump's election. It's been more difficult rallying contributions to the NRA with a president in the White House who's viewed as friendly toward gun rights. The NRA's power has been questioned, especially after the 2018 midterm elections where it was outspent by gun-control groups.

Since then, the legal issues have mounted almost by the week. The group's non-profit status has been threatened by an investigation by the attorney general in New York, where the NRA's charter was established in the 1800s.

There are allegations that LaPierre expensed hundreds of thousands of dollars in luxury clothing purchased in Beverly Hills and that the NRA has made tens of thousands of dollars in payments to a handful of influential board members. The Washington Post reported this week that the NRA considered buying a $6 million mansion at LaPierre's request last year before deciding against the purchase.

The NRA's president, Oliver North, stepped down in the midst of a rancorous annual meeting last spring. More recently, Chris Cox, its top lobbyist and widely viewed as a successor to LaPierre, resigned after LaPierre accused him of being in cahoots with North in a failed attempt to oust him as CEO.

The rare airing of the group's dirty laundry has exposed a divide within the NRA among those who believe members' dues are being misspent to enrich a small cadre of NRA elite.

Even some board members have openly criticized the NRA. Among them is Allen West, who described the organization as a "cabal of cronyism." After he and other critical board members were stripped of their committee assignments, West said the NRA stands for "National Retaliation Association."

The ire has also come from hardcore gun rights supporters. Some felt betrayed when the NRA didn't push back on Trump's ban on bump stocks after the 2017 mass shooting in Las Vegas. Others are unhappy that the Trump administration hasn't translated into an easing of gun laws.

Now LaPierre and the NRA are facing new backlash from Americans outraged over the violence in El Paso and Dayton carried out by gunmen armed with AK-47 and AR-15-style rifles.

"Everyone pays attention to Wayne LaPierre as the face of the NRA, but really everything under him has been washed away," said Adam Winkler, a professor at the University of California, Los Angeles, School of Law and an expert on gun rights and politics.

Longtime watchers of the NRA say it would be a mistake to count out LaPierre, who has earned the firearms community's trust with the successful fights against gun control he's led for decades.

Some acknowledge the allegations of financial improprieties are a problem, but they are happy with the NRA's legislative record under LaPierre.

"Wayne's got a lot of equity," said Rick Manning, a former NRA lobbyist. "When you win, people give you a lot of rope. ... And he's won."

Tom King, a longtime NRA board member, said LaPierre deserves that loyalty. The criticisms lodged against LaPierre, he said, have been fueled by anti-gun advocates and taken out of context.

"He's not going to give up. He's going to fight to the bitter end. And anybody who says differently doesn't know the man," King said.