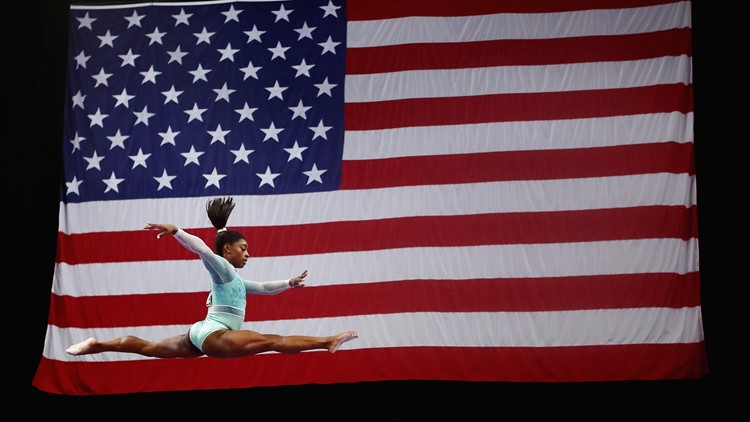 Photo by: Tim Bradbury/Getty Images
Simone Biles competes on the balance beam during day four of the U.S. Gymnastics Championships 2018 at TD Garden on August 19, 2018 in Boston, Massachusetts.

BOSTON — Give Simone Biles all the medals.

The Olympic champion not only won her fifth title at the U.S. Gymnastics Championships on Sunday night, she swept all four of the event titles. Even her “worst” event, uneven bars. Biles is the first U.S. woman to do that since Dominique Dawes in 1994.

Fast-forward a couple of months, and there’s a chance she could at least claim a medal on every event at the world championships in Doha, Qatar. That’s almost unheard of.

Biles finished with a two-day total of 119.85, more than 6½ points ahead of Morgan Hurd — who just happens to be the reigning world champion. She’s only the second woman to win five or more U.S. titles, joining Clara Schroth Lomady, who won six in the 1940s and ‘50s.

Simone Biles looks on during warm ups for day four of the U.S. Gymnastics Championships 2018 at TD Garden on August 19, 2018 in Boston, Massachusetts.
Tim Bradbury/Getty Images

Biles is so spectacular, it’s pretty much a given that everyone else is competing for second place when she’s around. In fact, her 2016 teammates would joke about competing in the “non-Simone division.” The talk going into the Rio Games was not whether she’d win the all-around title — that was a given — but if she could win gold on floor exercise, vault and balance beam.

She came close, winning floor and vault, but took the bronze on beam.

A medal on uneven bars was never in the cards. Oh, her bars were fine, good enough for the Americans to put her up in the unforgiving three-up, three-count format for team finals. But they weren’t good enough then to even get her into the bars final, let alone win a medal.

Now, however, they are.

While Biles took a year off after Rio to travel and enjoy the perks of being an Olympic champion, longtime coach Aimee Boorman moved to Florida. That mean Biles needed to find a new coach when she returned in November, and she began training with Laurent Landi who is as close to an uneven bars whisperer as the sport has.

Landi coached Madison Kocian, who won a world title on uneven bars in 2015 and the silver medal in Rio.

He’s done wonders with Biles in the short time they’ve worked together. In addition to upgrading — she added two new skills during the routine and added a full twist to her dismount — Biles’ routine now looks effortless. Before, you could almost see her mind working through every skill as she did it, and it appeared similarly labored.

Now she floats from one skill right into another. Nothing is rushed, nothing is a struggle. Or, if it is, no one can tell.

Biles will have competition from the Russians, Chinese and Nina Derwael of Belgium, who just won the bars title at the European championships. Maybe even her own teammate, Riley McCusker, who scored higher than Biles on Sunday night but couldn’t beat her two-day total.

But Biles will most definitely be in the mix for a medal on uneven bars. And everywhere else.