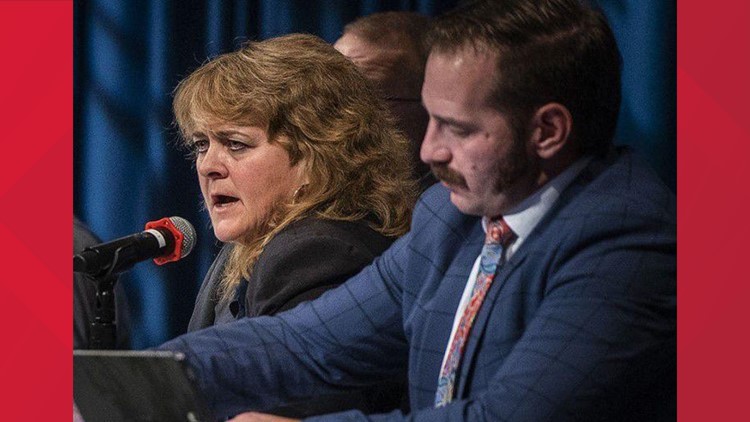 Photo by: JAKE KING/Idaho Press, file
Reps. Barbara Ehardt, left, and Bryan Zollinger, right, both Idaho Falls Republicans, have sponsored a bill to set 16 as the minimum age for marriage and limit marriages of 16- and 17-year-olds to people within three years of each other in age.

The House Judiciary Committee unanimously and with no debate voted to introduce the bill along with a list of other bills, clearing the way for a full hearing later. Sponsored by Reps. Barbara Ehardt and Bryan Zollinger, both Idaho Falls Republicans, the bill would set 16 as the minimum age and limit marriages of 16- and 17-year-olds to people within three years of each other in age.

Currently, 16- and 17-year-olds can marry in Idaho with parental consent, and younger children need a judge to sign off as well.

Zollinger and Ehardt voted against Wintrow's bill last year, and the main difference between theirs and Wintrow's is that Wintrow's would have required a judge to sign off on a 16 -or-17-year-old's marriage, while theirs would only require parental consent, as is the current law.

Zollinger said they were always against child marriage but thought Wintrow's bill went too far in limiting parents’ rights and getting the courts involved.

“We’ll save the state money for courts and parents will have the authority,” he said.

RELATED: 'There has to be more accountability': Flaws with family court can become costly and devastating

The House's 2019 vote against Wintrow's bill got some national attention, and Ehardt and Zollinger were both inundated with phone calls and emails criticizing them. This, they said, helped prompt them to work out their own version.

“Contrary to the narrative that was promoted by our Democrat colleagues, never ever did we want to marry young girls off to old men,” Ehardt said. “Our goal was to preserve parental rights.”

Ehardt said they worked with the Legislative Services Office and researched laws in other states while drafting the bill. Most states allow children under 18 to marry under some circumstances, such as with parental or court approval or if the girl is pregnant, although even with these exceptions many set absolute minimum ages ranging from 14 to 17. Idaho is one of about a dozen states that have no minimum age. Several states have made their child marriage laws stricter over the past few years.

Sen. Steve Vick, R-Dalton Gardens, is working on a similar bill that would set the age range for 16- and 17-year-olds to marry at four years but is otherwise the same. Zollinger and Ehardt have been working with him, saying the two bills would give lawmakers options. Ehardt said she might even prefer Vick's bill, noting that high schools include people with a four-year age difference and this could allow for marriage at 16 in cases where people meet in the freshman and senior years.

From 2014 to 2018, out of 66,517 people who got married in Idaho, 567, or less than 1%, were under 18, according to statistics provided by the state Department of Health & Welfare. The majority of these marriages involved girls under 18 and older men. There have been three same-sex marriages since it became legal in Idaho in 2015 involving one partner who was under 18.

Betsy Z. Russell is the Boise bureau chief and state capitol reporter for the Idaho Press and Adams Publishing Group. Follow her on Twitter at @BetsyZRussell.

More from our partners at the Idaho Press: Idanha's elevator, broken for 9 months, slated to be fixed next week

See all of our latest political coverage in our YouTube playlist: