At both the roundtable and the luncheon, Barr stressed that federal and local officials should use "collaborative efforts" to achieve police reform. 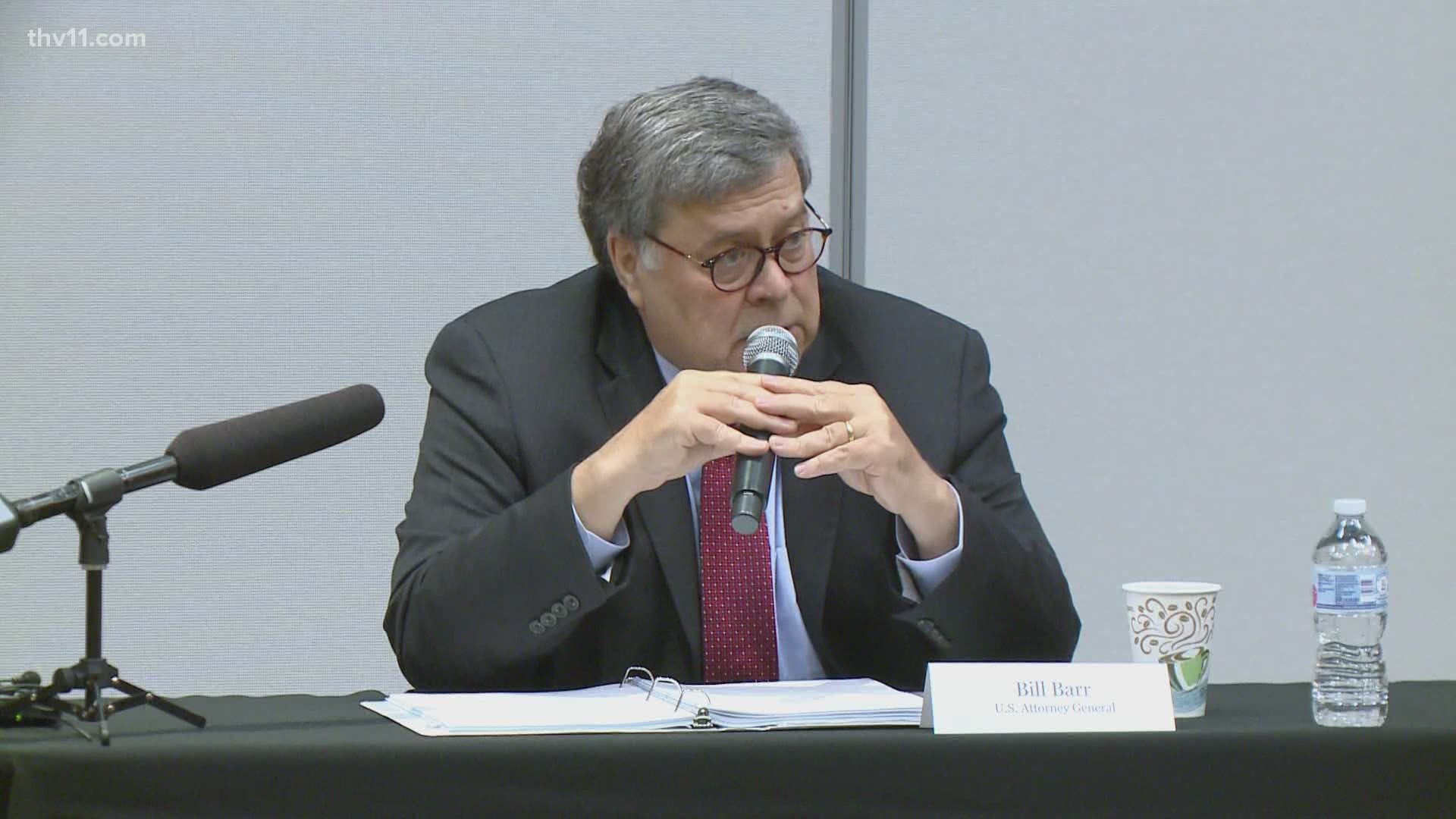 LITTLE ROCK, Ark. — U.S. Attorney General William Barr met with Arkansas's congressional and state leaders Thursday in the latest stop on a tour of the country in the wake of high-profile police killings.

The nation's top law enforcement officer and member of President Trump's cabinet arrived just as the Supreme Court delivered opinions that opened the president's tax returns to scrutiny from a grand jury, but delayed a decision on whether Congress can access those same records.

"The decision made very clear that the president just is not at the mercy of litigants and investigators," Barr said after a luncheon with Governor Asa Hutchinson at the governor's mansion.

He expressed disappointment that the Supreme Court did not accept the Department of Justice's arguments that the president's records are exempt from those inquiries.

Moments before, the governor announced that Barr's justice department would appeal a federal judge's decision halting the governor's plan to impose work requirements for people who receive Medicaid.

"The Department of Justice will be filing that petition for writ of certiorari that will support our case here in Arkansas," the governor said, using the legal term that asks a higher court to review a ruling.

The Supreme Court wrapped up its term Thursday, so it will likely be several months before the justices decide whether to hear the case.

The rest of the day focused on policing, starting with a morning law enforcement roundtable at a west Little Rock hotel.

The attorney general and his host, Sen. Tom Cotton called the police killing of George Floyd in Minneapolis in May "ghastly" and "horrific," but both said calls to "defund the police" are too radical.

"We saw protests and demonstrations that then got infiltrated and hijacked by violent agitators," Sen. Cotton said. "In some cases, violent insurrectionists."

"The reaction has been of course a strong push for more reform, but we saw that extremists like 'Defund the Police,' which of course is the exact opposite direction we have to go," Barr said. "We need to support, provide more support. Provide training."

About a dozen protesters lined up outside the hotel to disagree. More were on hand when the attorney general attended a business roundtable in the afternoon.

Rep. French Hill joined the events and praised police reform efforts underway in the state. His Democratic opponent, State Sen. Joyce Elliot criticized the congressman for being in lock-step with Barr.

At both the roundtable and the luncheon, Barr stressed that federal and local officials should use "collaborative efforts" to achieve police reform.

He pointed to a recent investigation that found a unit in a police department in Massachusetts was corrupt as a sign that he hasn't sworn off "process" inquiries but preferred working together rather than bringing in judges.

That signals he probably won't get involved in recent disputes in the Little Rock police department.