In Arkansas, the presidential candidate lineup on the ballot is chosen at random by each county. And some counties get creative with it. 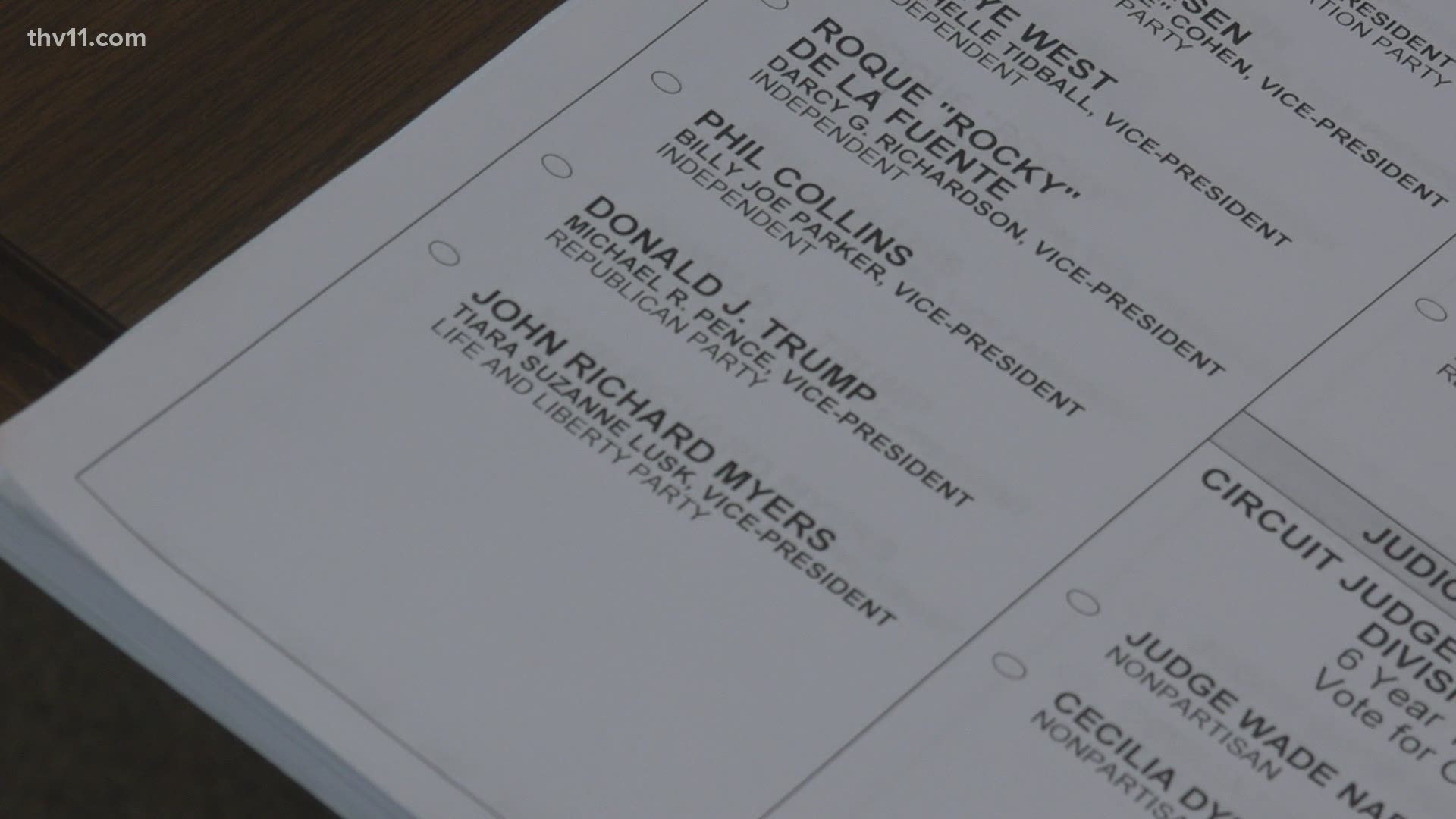 HOT SPRINGS, Ark. — With record numbers of voters casting ballots early, questions are piling up about the process in Arkansas. A social media video that originated in the Natural State has people questioning how the major party candidates, former Vice President Joe Biden and President Donald Trump, are arranged on the ballot.

"So whenever they are voting for president, it has Biden and then the independents on one page and they didn't see Trump," said Christy Barnett of White County in a TikTok post this week. "So they're thinking, well maybe he's on down the ballot, which is... crazy."

It's not so crazy, actually, but it picked up steam on the social media platform as people chimed in with their experience. It turns out, many are surprised to find their preferred candidate among such a crowded field and then discover they might have to hunt to find him or her. Then, when they ask their friends from another county, they get another surprise.

Haley has been handling elections for 22 years in Hot Springs and says they used to use playing cards to line up candidates. Back in August, every county election commission had to publically set the candidate lineup. Some had more creativity than others.

"We take the order that the Secretary of State sends us for the candidates and we draw a ball out and the lowest number gets the highest position on the ballot," Haley said.

That makes it random and fair and takes place for every contested race in the election.

In Little Rock, President Trump is right on top, and that translates into the top line of the voting machine touch screen. You have to hit the "more" button on the screen to find the others, including Vice President Biden.

In Saline County, they used numbered index cards to set the order with a drawing that placed entertainer Kanye West on top, President Trump third, and Biden at the bottom. Up in Conway, the Faulkner County ballot has the two major party candidates close together. In Hot Springs, it's the Republicans toward the rear.

"I think people expect the top two candidates to be on the top and everybody else, but that wouldn't be fair," Haley said. "So the system has to be fair. We draw by lots and sometimes the incumbent gets near the top. This year they're down toward the bottom. And it's almost impossible for two counties to have the same line up."

Other quirks include allowing candidates already holding an elected office the choice to list that title on the ballot. But that does not extend to the presidential race. You wont find "president" next to Trump's name or "vice president" alongside Biden or Mike Pence.

So, be prepared to hunt and peck to find your choice over multiple screens. Double check your selections both on the screen and on the printed card before you push it into the scanner.

And yeah, everybody wants to be number one, but when the race is this big, the bias is going to be toward the biggest names, no matter how big the field is.

"If they're all unknown, I would say number one is the best position, but if they're known candidates, I don't think it has much impact," Haley said.