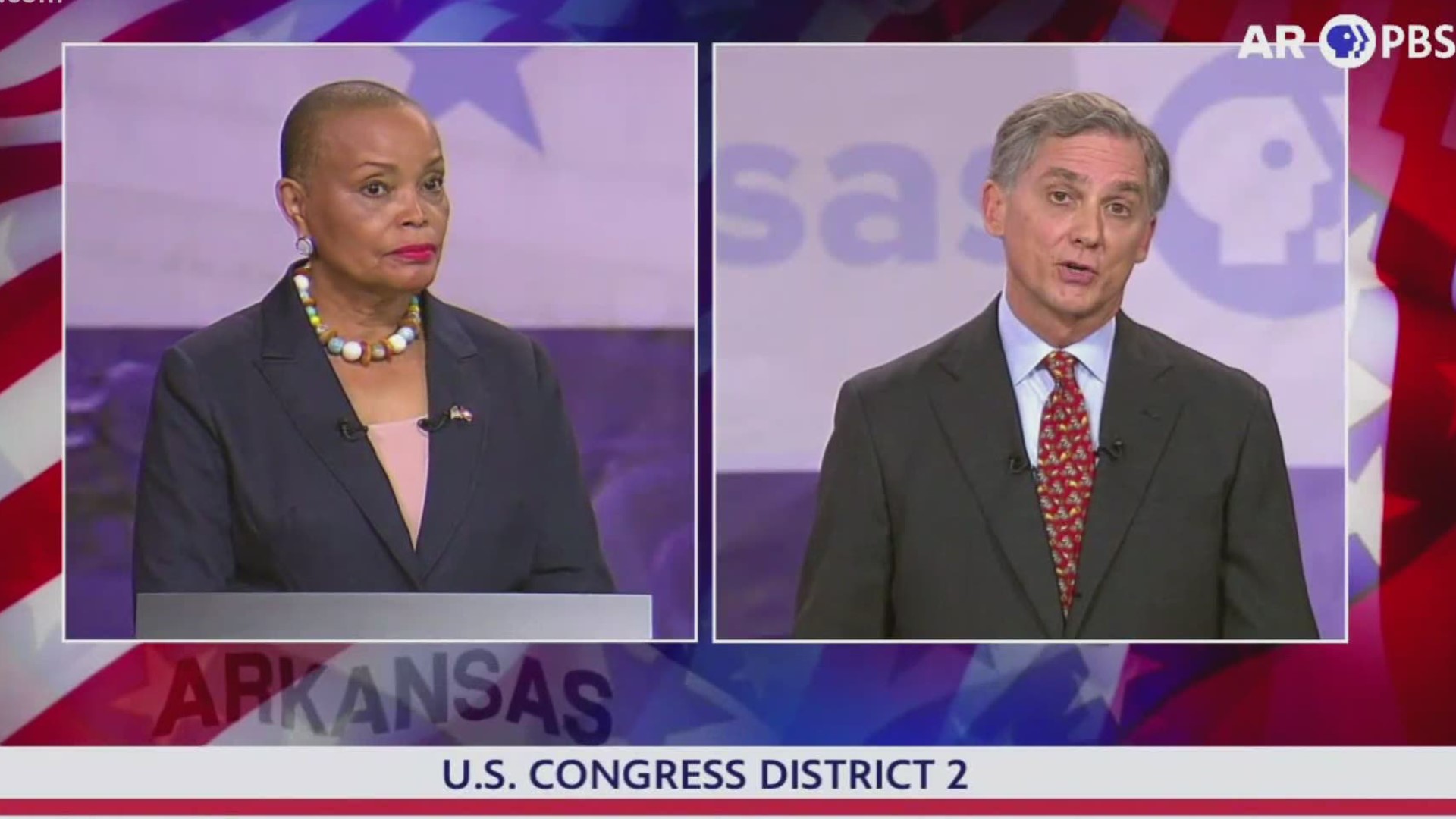 Elliott, a state senator from Little Rock, portrayed the three-term incumbent as aligned with Wall Street and against the Affordable Care Act.

Rep. Hill called Elliott too radical and accused her of being a fan of big spending programs and "Medicare For All" as championed by progressives like Sen. Bernie Sanders (I - Vt.)

"I do not support defunding the police," Elliott said in response to the first question from the three-person media panel. "There are things that we certainly can do to work better in our communities because it should never be a zero sum game."

"My opponent has stirred controversy by saying something that I think is too radical for the average Arkansan," Hill said in response. "Which is that our police forces are systemically racist."

The debate was staged by Arkansas PBS on the campus of University of Central Arkansas.

The candidates each got opening statements then answered panel questions in back-and-forth, two-minute periods. Then wrapped with a closing summation.

All in the large television studio wore masks into the building but then relied on social distancing once the debate began.

No one wore a mask on air and there was no studio audience.

That opening argument over police and justice reform set the tone. After that, through topics from pandemic response to federal spending, and especially health care, both candidates stuck to themes.

Rep. Hill countered that his position as a minority member of the House Finance Committee played no role in how that portion of CARES Act funds were distributed.

"The main issue about paycheck protection though is the thing we should all take, it was the best program we could have done," he said. "We saved 51 million jobs in this country."

Neither candidate interrupted the other thanks in large part to a large countdown clock between the main cameras.

Instead, both waited to retort even during their most testy exchange over the Affordable Care Act and Republican efforts to repeal and replace it in 2017.

"What they've done is they've given up on the cost of Obamacare and are now supportive of a complete government takeover," Rep. Hill said while countering that Democrats in the House have not put forth plans to improve the sprawling health insurance overhaul.

"Congressman I don't want to get into a contest of lies and who is telling lies but it is just not the case," Elliott responded, while accusing Republicans of undermining the health care plan and endangering its provisions for coverage of pre-existing conditions.

The middle of the debate saw both come close to agreement as they each vowed to put more money into rural broadband, and had similar views on the best police reforms.

In the end both managed to land their blows when it came to the characterizing the other by mostly sticking to broad outlines.

"You say you're bipartisan here in the state but you have the most liberal voting record in the General Assembly," Rep. Hill said.

"All of this is made worse when our congressman votes against your health care and is gleeful about it," said Elliott.

Both candidates skipped a post-debate news conference and sent spokespeople instead. Neither explicitly declared victory, though both respective parties sent out news releases later.