As the night went on more rounds of tear gas were thrown, as people refused to leave even after police gave numerous warnings. 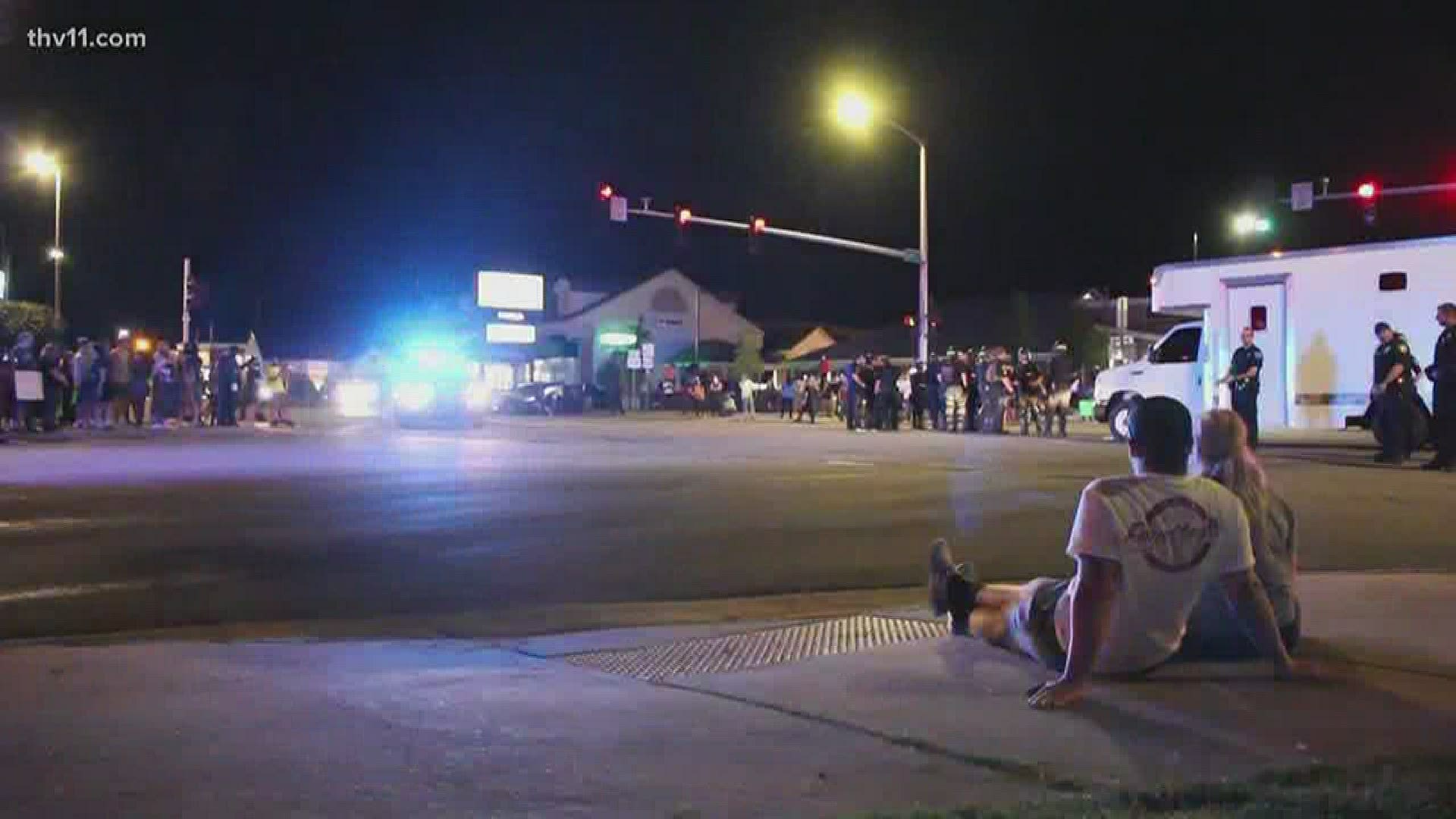 BENTONVILLE, Ark. — Protesters gathered at the Bentonville Square Monday (June 1) to seek justice after the death of George Floyd, who was killed last week by a Minneapolis, Minnesota police officer.

Those who showed up to the protest say it was meant to be a peaceful protest seeking justice for Floyd.

“It’s a nonviolent peaceful protest I want to insist that and make sure everything stays safe guys,” said protester Hunter Miles.

Once it got dark, the protest intensified, people began throwing rocks at windows and kicking police vehicles.

Fireworks went off in the middle of the protesters, and one man was detained and allegedly shot with rubber bullets during an encounter with law enforcement.

Police reported one of their vehicles was damaged on the Bentonville Square and police released multiple rounds of tear gas on the protesters.

According to Lt. Shannon Jenkins with the Benton County Sheriff's Office, the situation went from a peaceful protest to an unlawful gathering. 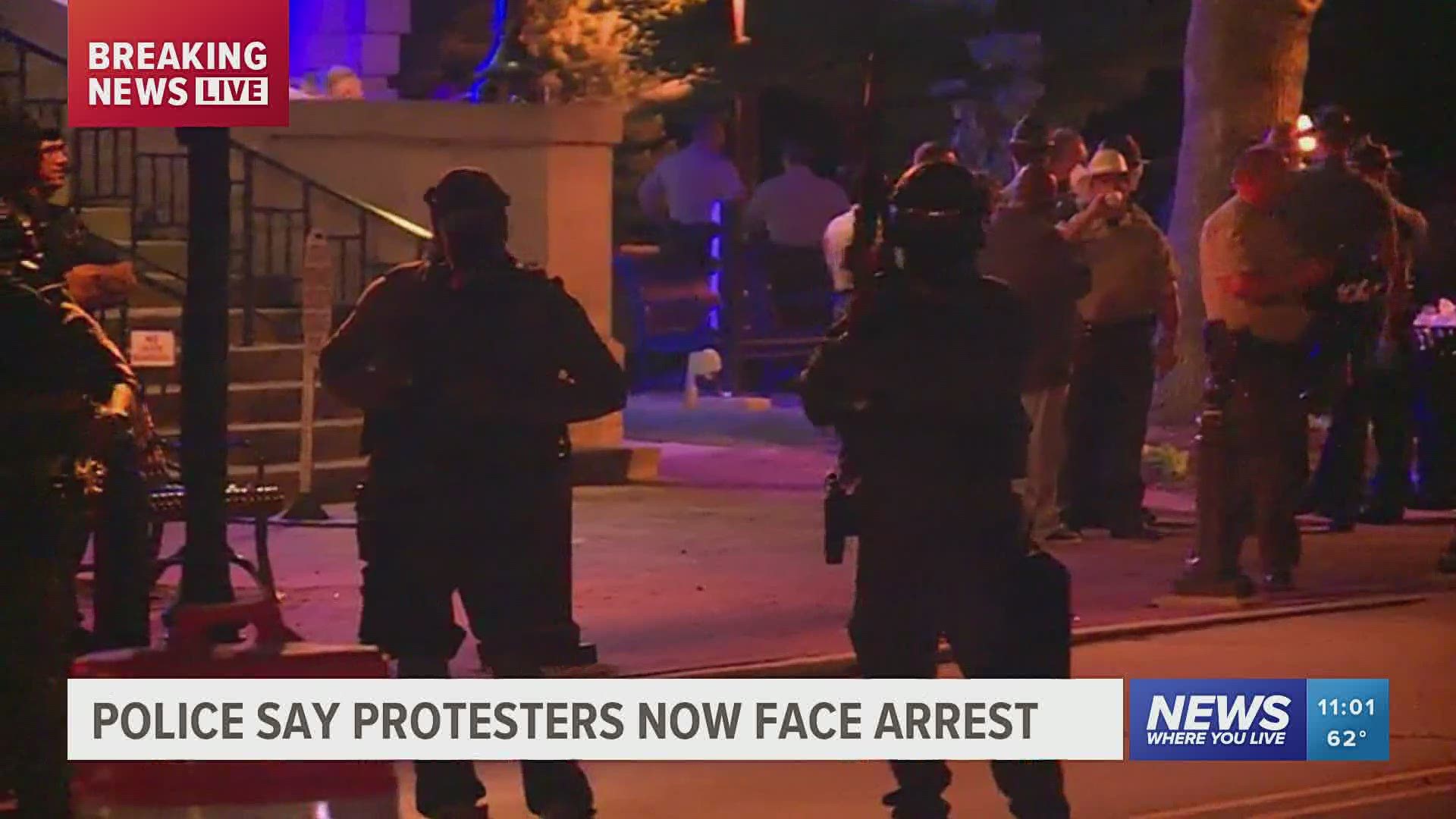 Officers began asking everyone to go home and avoid the square altogether.

Multiple agencies from across the area responded to the protest.

The protests began to clear around 11:00 p.m. after officers used an intercom to let everyone know on the square, if they stayed, they would be arrested.

As the night went on more rounds of tear gas were thrown, as people refused to leave even after police gave numerous warnings. 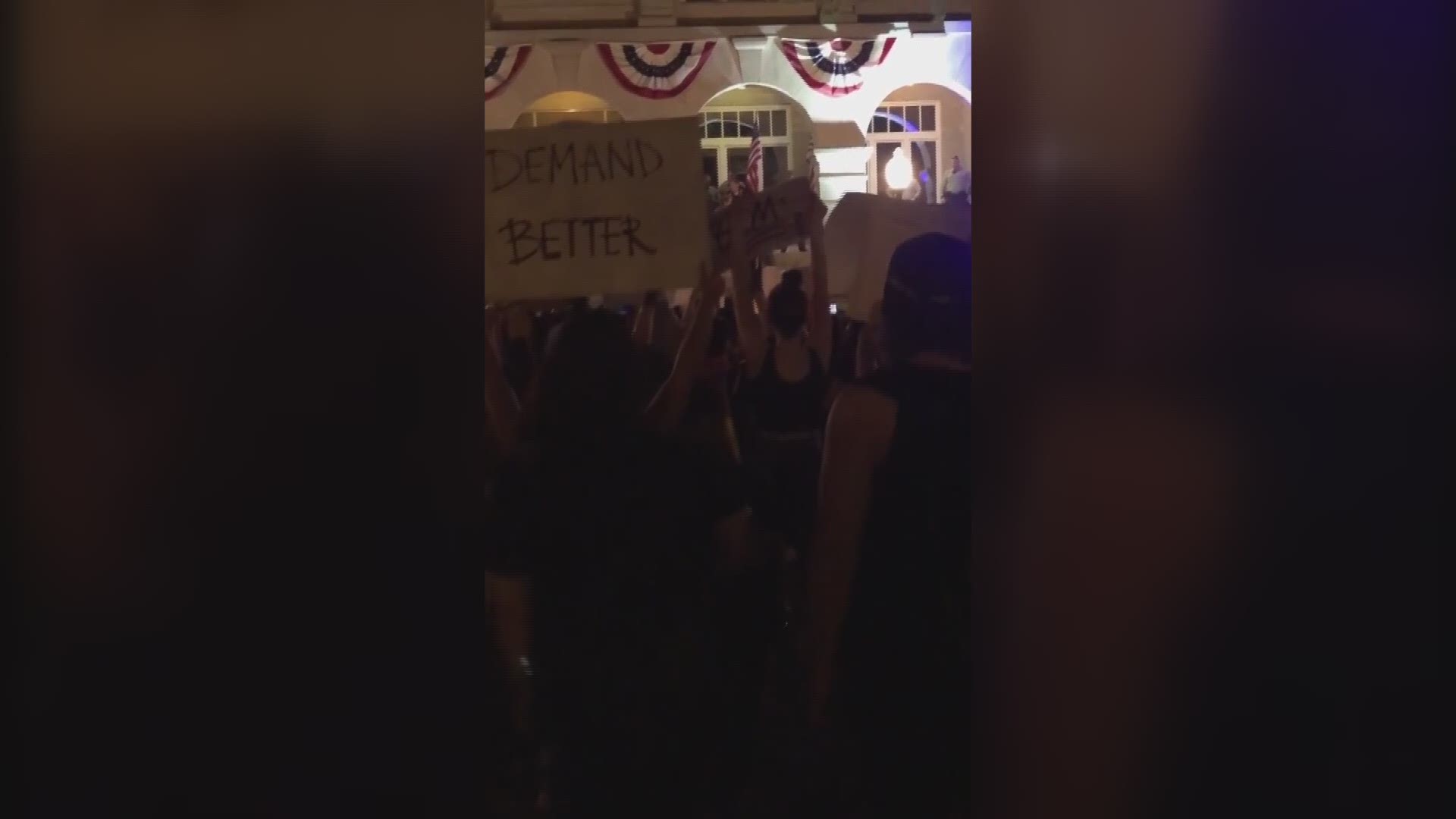 Here are pictures of the aftermath of the protest:

The following comment is from Mayor Stephanie Orman regarding the protest:

“We have been made aware of some protest planned in the City of Bentonville regarding the death of George Floyd. We respect and support peaceful protest and see this as an individual’s right as part of our democracy. This incomprehensible act has caused anger and frustration, but we ask for that anger to be channeled in a positive manner without influence from outside organizations.

Our public safety officials are trained and ready to handle any emergency situation in our City, and while we support peaceful protest, destruction of property and violence are against the law and our counteractive to peaceful protest.”

The City is encouraging people, as in any gathering, that social distance guidelines should be followed as recommended by CDC and ADH.

The City of Fayetteville joins cities across the nation who are horrified by the death of Floyd.

The City extends its deepest sympathies and heartfelt condolences to the family and friends of Floyd as well as to the Minneapolis community he called home.

Several protest events took place in Fayetteville late last week and over the weekend in response to the police officer’s act of excessive force that killed Floyd. While most participants engaged in peaceful protests and demonstrations, some exhibited behaviors that created unsafe conditions for themselves and others.

These included standing in streets, stopping moving vehicles and engaging in person-to-person confrontation. Some participants did not practice social distancing or wear face coverings to help prevent the spread of COVID-19.In response to the protest events held in Fayetteville, Mayor Lioneld Jordan issued the following statement:

“Part of what makes Fayetteville unique is how engaged our community is on local, state, national and global events. I love this city, and I love all our people. I’m proud to live in a town that welcomes voices of all kinds, from many different backgrounds. Our residents are protesting Mr. Floyd’s horrifying and inexcusable death through peaceful demonstrations and dialogue. I appreciate our community’s participation in this dialogue, though I am troubled by a report of one event that began peacefully but escalated in a way that is neither typical of our community nor representative of the spirit of Fayetteville. I am also concerned about the lack of COVID-19 precautions being taken by some attendees at these events. Fayetteville is a compassionate city. Fayetteville is a welcoming city. Violence has no place in our community. If you participate in demonstrations, I encourage you to do so peacefully and not let violent factions derail your cause or your message.”