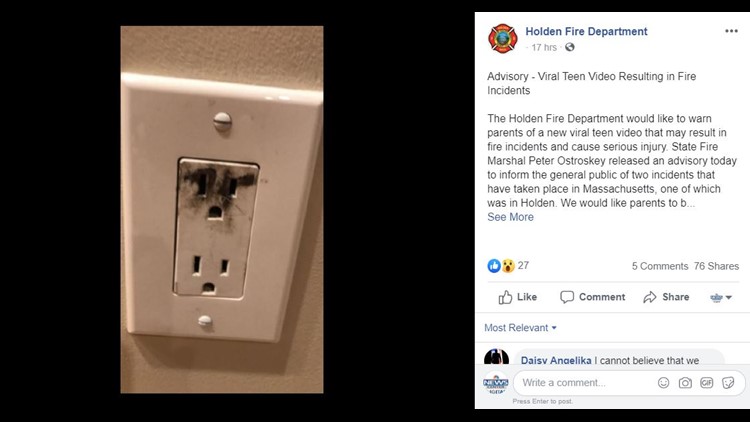 The so-called ‘outlet challenge’ involves using the plug of a phone charger, partially inserting it in an outlet, and sliding a penny down between the outlet and the charger prongs. The result: sparks, electrical system damage, and in some cases, fire.

The Holden Fire Dept. also posted a warning about the challenge. Via Facebook, the Dept. warns parents of the challenge, and informed the public that the viral videos have so far caused a handful of incidents in Mass. that officials are aware of.

In Holden, a concerned mother shared a photo of a scorched outlet. At Plymouth High School two students were caught performing the prank on Tuesday, also resulting in scorched outlets.

An attempt at the challenge led to a fire at Westford Academy. The students responsible for starting the fire could face criminal charges, according to Ostroskey’s letter.

“This video is a concern and similar to past viral videos that encourage unsafe behavior,” the letter says. “Alert [school officials and parent organizations] to not only look for signs of fire play like scorched outlets but to have conversations about fire and electrical safety with tweens and teenagers.”

"Social media elevates it," said Plymouth Fire Chief Ed Bradley. "They see it online, they see someone do it, they start laughing, they run away and no one gets hurt and they assume the same will happen when they do it, so they think it's funny to do it in a classroom."

The Holden Fire Dept. post reminds parents to “discuss the dangers of certain online ‘challenges’” and to recognize the dangerous activity on the internet.

RELATED: Gymnasium in flames at campground in Brooks

RELATED: Texting scam disguises itself as delivery notification from Amazon, FedEx, according to reports