The Florida Republican appeared on Fox News to defend himself against claims he had a sexual relationship with a 17-year-old girl. 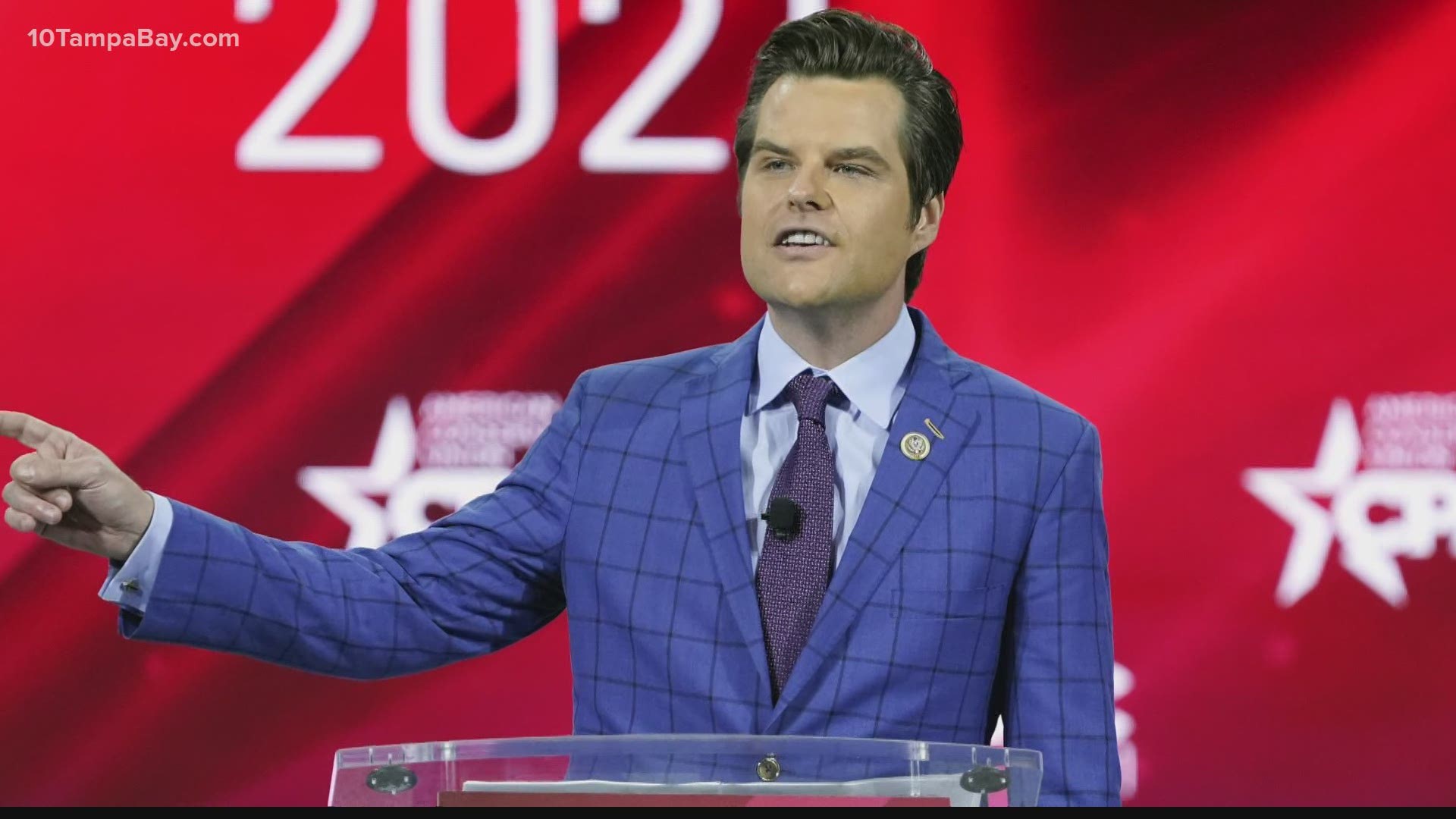 TALLAHASSEE, Fla. — Florida Rep. Matt Gaetz appeared on Fox News Tuesday night to defend himself against allegations that he had a sexual relationship with a 17-year-old girl and paid for her to travel with him.

The New York Times was the first to report the news.

It's an interview that by the end had anchor Tucker Carlson calling it "one of the weirdest interviews [he's] ever conducted."

During Gaetz's efforts to defend himself, while speaking with Carlson, he appears in two instances to attempt to bring Carlson into the matter.

The first came as the Republican congressman explained how he was troubled by the "real" motivation behind the allegations.

“I believe we are in an era of our politics, now Tucker, where people are smeared to try to take them out of the conversation. I’m not the only person on screen right now who’s been falsely accused of a terrible sex act," Gaetz said.

It's a comment that Carlson was quick to divert from, saying that Gaetz was referring to a "mentally ill" viewer who accused him of a sex crime 20 years ago. Carlson added that he has never met the person in question.

But the awkwardness of the interview did not stop there.

Later on, Gaetz once again appears to try to involve Carlson in the matter by recalling a dinner the two allegedly shared two years ago.

"Actually, you and I went to dinner about two years ago. Your wife was there and I brought a friend of mine, you’ll remember her," Gaetz told Carlson, seemingly relating the dinner to the investigation.

The Florida lawmaker also claimed that the female friend was threatened by the FBI and told she "could face trouble" if she did not admit that Gaetz was involved in a "pay-for-play scheme."

A visibly confused Carlson only replied by saying: “I, I don’t remember the woman you’re speaking of or the context at all, honestly.”

Throughout the interview, Gaetz repetitively denied the allegations against him and called for his travel records to be checked to prove his innocence.

“I have not had a relationship with a 17-year-old. That is totally false," he said.

The Times reports, citing three people briefing on the matter, that Gaetz may have broken federal sex trafficking laws that prohibit someone from inducing a person under 18 to cross state lines to engage in sex in exchange for money or something of value.

At this time, no charges have been brought against Gaetz.

During the interview with Fox, the Florida Republican also doubled-down on his claims that he and his family are being extorted.

...and my father has even been wearing a wire at the FBI’s direction to catch these criminals. The planted leak to the FBI tonight was intended to thwart that investigation.

No part of the allegations against me are true, and the people pushing these lies are targets...

“What is happening is an extortion of me and my family involving a former Department of Justice official," he said, claiming the situation began on March 16.

According to Gaetz's account, his father received a text demanding a meeting where a second demand was allegedly made for $25 million in exchange for making “horrible sex trafficking allegations” against him “go away."

The congressman says his family took the information to the FBI and Department of Justice, which in return asked his father to wear a wire. Gaetz claims what was recorded on that wire would also prove his innocence and called for the FBI and DOJ to release them.

After the interview had wrapped and Fox News came back from break, Carlson addressed what viewers just witnessed before continuing on to his next story.

"That was one of the weirdest interviews I’ve ever conducted," he said, adding that a call was put out to the Florida congressman to share more on a story that had just appeared hours before.

"I don’t think that clarified much but it certainly showed that this is a deeply interesting story..." he said in closing.

10 Tampa Bay has reached out to Gaetz's office but has not yet heard back.

You can watch the interview below.