A self-described Satanic Temple drove a statue of Baphomet to the gathering, hoping to someday see it placed on the same grounds as the state's Ten Commandments monuments. 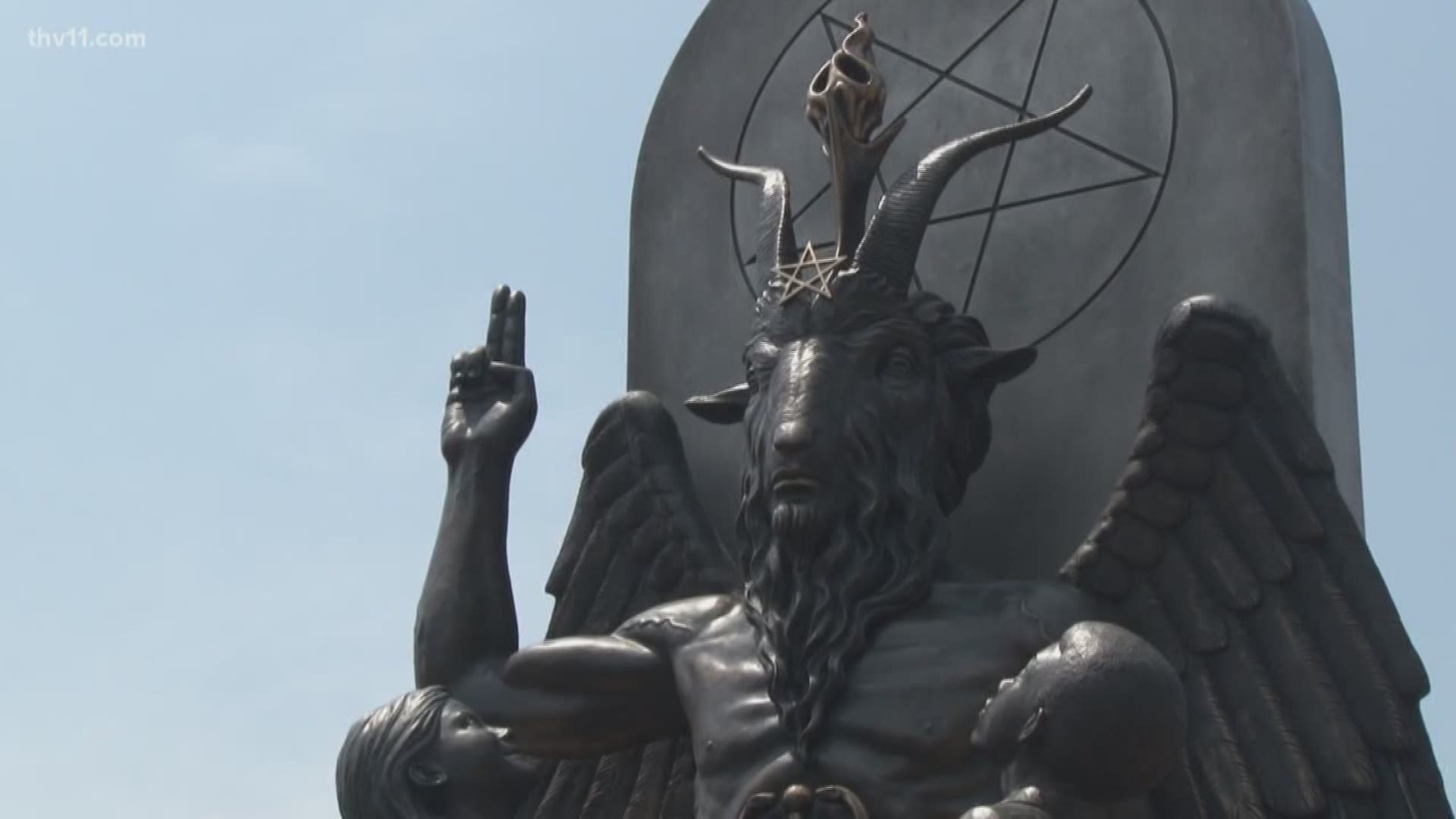 LITTLE ROCK, Ark. (KTHV) - Fire and brimstone was the theme under a scorching midday sun as the rights of religions, non-religions and anti-religions all debated at the Arkansas State Capitol. A self-described Satanic Temple drove a statue of Baphomet to the gathering, hoping to someday see it placed on the same grounds as the state’s Ten Commandments monuments.

The monument arrived on a flatbed truck and was unveiled at the bottom of the capitol steps. Meanwhile, the Ten Commandments stood behind a screened fence rimmed with caution tape, presumably for maintenance and to prevent mischief in the heated environment.

“We find ourselves here because our elected officials, who may have been voted in by 50.1 percent of their district, they've failed and forgotten that upon taking that office they then represent 100 percent of that district,” said Leewood Thomas of the Arkansas Society of Freethinkers. He was among four scheduled speakers who climbed on tot the truck to address the crowd of about 100 people.

Other speakers were interrupted by apparently Christian counter-protesters. One man was led away after shouting his piece at one speaker. A police officer escorted him, though that was the most confrontational moment of the two-hour rally.

Upstairs in the air-conditioned capitol, state senator Jason Rapert (R- Conway) attended meetings while the crowd derided him outside. Rapert is the driving force behind erecting the Ten Commandments monuments, leading a group that secured the private funding and pushing the tablets through using a new law that gave the legislature the power to authorize monuments on the grounds.

Rapert also helped raise funds after the first version of the monument was destroyed when a man later found to be insane toppled them in his car. The new version has four security bollards surrounding it. Rapert points to similar monuments in place in Arizona and Texas and depictions in the U.S Supreme Court building to defend their placement in Arkansas.

“If the Ten Commandments display is good enough for all of those other state capitols and the U.S. Supreme Court, it's good enough for the people of Arkansas and we will defend the law,” Rapert said.

“What the senator fails to mention is that on the same day that Supreme Court decision was handed down, the court ruled against two standalone Ten Commandments monuments,” Greaves said to the crowd. “They only preserved the one in Austin on the grounds that is was a 40-year-old landmark and importantly, that it was displayed a number of other monuments with no evidence of viewpoint discrimination.”

While the arguments appear headed for more litigation, even a few Christians found common cause with the Satanists, but they still see little room for compromise.

“It's a very hardline thing,” said Chad Jones, a minister with the Arkansas Progressive Christians. “Senator Rapert, unfortunately, isn't open to a dialog on this issue. it's the Ten Commandments monument and none others.”

“It will be a very cold day in hell before we are ever forced to put up a permanent monument on the state capitol grounds that's as offensive as this group that hides behind fake names as they travel the country,” said Rapert.

Lawyers and plaintiffs in the federal lawsuit hoping to have the Ten Commandments removed stayed away from the rally. The Satanic Temple has sought to join the suit but has yet to get a ruling on their motion from the judge.

“This was not our rally,” said Rita Skalr of ACLU Arkansas. “Furthermore, the rally just goes to show how divisive the Ten Commandments monument really is.”