'She loved with her heart': Sherwood woman murdered by son remembered as giving caretaker

Sonya "Missy" Glover was murdered by her son on December 21st and the community is coming together as one to remember her. 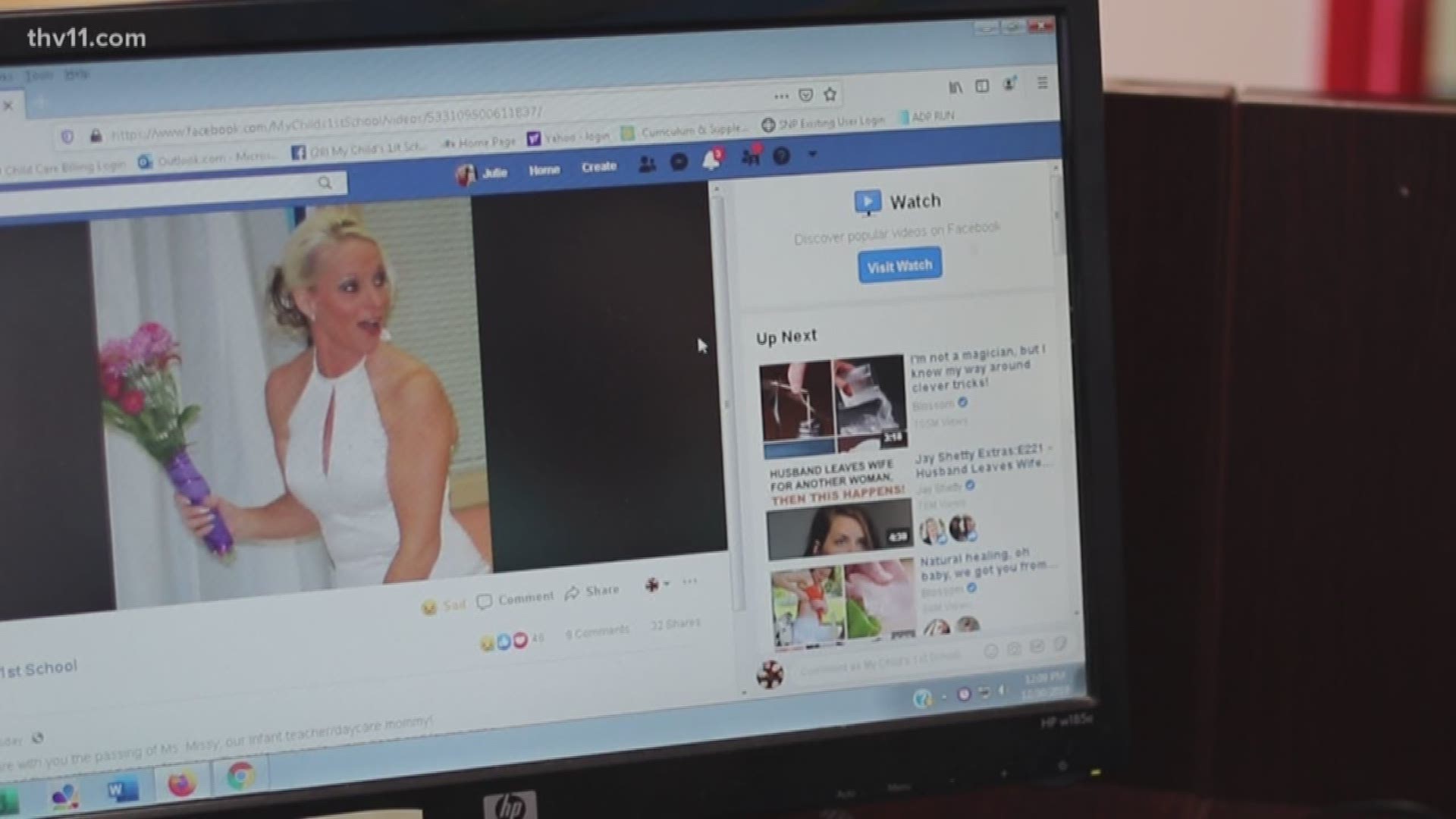 SHERWOOD, Ark. — The Sherwood community is still reeling after police say Sonya "Missy" Glover was murdered by her son.

19-year-old Carson Glover is charged with capital murder, accused of killing his mother on December 21, just before midnight at their home on West Woodruff Street.

He and 55-year-old William Glover were arrested four days after police found her body.

On Monday, Missy Glover's co-workers shared with THV11 the unforgettable legacy she is leaving.

It wasn't hard to realize after walking into the daycare where Missy Glover worked, My Child's 1st School in Sherwood, the impact she had on every coworker, child and parent.

When she died, a GoFundMe was set up to help with the funeral costs and it exceeded expectations already raising $7,000.

That's when her second family at work decided they wanted to have another way for people to donate, a box with Missy's shining face on it that you see as soon as you open the doors to the daycare's lobby.

Julie Daniels, Director of My Child's 1st School, said she had a genuine love for everyone.

"She had that open personality where she just loved. She loved with her heart," she said.

Daniels said Missy Glover spent the last 16 years of her life walking the halls and touching people's hearts at My Child's 1st School in Sherwood.

"She was always one of those bright lights that if you had a bad day, you would just sit there and talk to Missy," she said.

That uplifting spirit is why Daniels said she had a special way with the ones she took care of every day.

"It was just one of those magical things she just had with babies," she said.

So magical that Daniels said the 6-month-old to 12-month-old bundles of joy that she worked with, never wanted to leave her side when it was time to go.

"'Missy Missy' usually that's one of the baby's first words is 'Missy,'" she said.

Daniels described her as everyone's second mom as she was able to experience those monumental "firsts" in many children's lives.

"If you think about these kids, if they knew her and if she touched their lives, they're just better people for it," she said.

Cox said she was always willing to help everyone.

"Her personality, man, she was a good one," she said.

Cox said all the years she knew Missy, her contagious smile and laugh never dwindled, but there was one quality that made her shine brighter than the rest.

"Her loving arms for the kids," she said.

Arms that Daniels said were always open and can never be replaced.

"You can never fill her shoes. She had a huge heart and huge shoes and you'll never fill them," she said.

Memories of Missy still fill the daycare with her Christmas decorations from the lobby to her classroom.

Simple snowman and snowflakes that Daniels said they won't be putting into boxes anytime soon.

"It's just one of those things where it's really hard to let go because we just keep expecting her to walk through the door," she said.

Coworkers put out the donation box last week and it already has $85 in it.

If you'd like to donate, you can drop off donations at My Child's 1st School in Sherwood between 6:30 a.m. and 6 p.m.