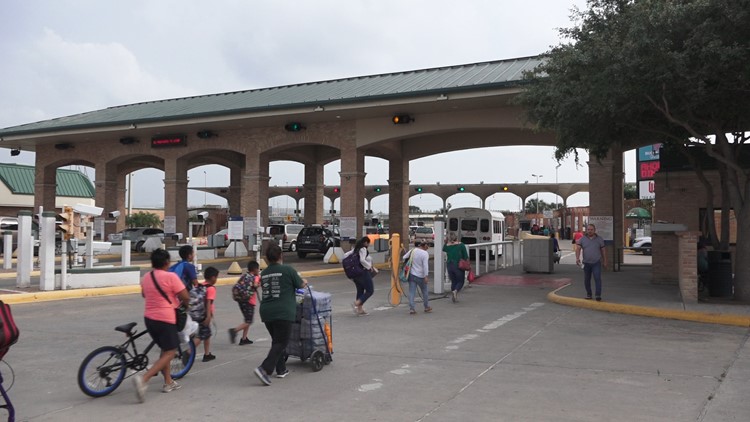 Photo by: KENS
Commuters walk towards the McAllen-Hidalgo-Reynosa International Bridge

HIDALGO, Texas — Sources in a New York Times article said President Donald Trump pressured his acting secretary of the U.S. Department of Homeland Security to shut down the border despite saying last week he would delay making that decision for a year.

The President’s threats are aimed at coercing Mexico into stemming the flow of illegal drugs and migrants crossing into the US.

There’s renewed concern among border residents over the possibility of closing ports of entry with Mexico.

“I don’t want to stay over there longer than a day,” said Gerardo Higareda, a 29-year-old Houston consultant. “[I fear] that I find out tomorrow that it’s shut down and I can’t come back until I-don’t-know-when. Obviously, everything is unpredictable at the moment,” he said.

Higareda is a US citizen walking to Reynosa, Mexico to visit friends. He’s concerned that crossing now might mean not being able to come back any time soon.

“Three to four hours walking. Eight hours was the longest registered vehicle line a few weeks ago,” he said about bridge wait times at the Hidalgo International Bridge.

That’s what people crossing the border legally by foot or by car have had to deal with ever since President Trump began threatening to close the border with Mexico a few weeks ago.

Some like Jose Resendez of Edinburg have no backup plan if they’re stuck on the other side.

“It’s a difficult question. I don’t know what to answer,” said the 52-year-old while on his way to Reynosa to visit a sick family member.

Undocumented migrants interviewed by the KENS 5 Border Team have said the president’s threats to shut down the border have given them and smugglers a reason to come now.

U.S. Customs and Border Protection apprehended more migrants in March than in any other month since 2007.

The recent influx has led DHS to reassign customs agents to help the U.S. Border Patrol with the processing of migrants, leaving the ports understaffed.

Ports of entry along the US-Mexico border remain understaffed after DHS reassignment of customs agents to help Border Patrol with migrant surge.
KENS

A closed border means 4-year-old Valeria Rodriguez won’t be able to get to school. She’s a US citizen living with her grandmother Juanita Limas in Reynosa.

“It would hurt both Mexico and the US,” assured Limas.

The US Chamber of Commerce estimates 5 million American jobs are tied to Mexico.

The president’s threats, including the release undocumented immigrants in ‘sanctuary cities’, doesn’t seem to keep people from crossing the border illegally and legally.

“I’m going to go visit,” said Higareda about going to Mexico. “I mean, take the risk.”