A motion filed Monday shows that defense attorneys believe the murder trial should be moved out of Dallas County.

Updated at 4:18 p.m. with statement from civil rights attorney.

Amber Guyger can't get a fair trial in the killing of Botham Jean in Dallas, defense attorneys for the former officer say.

Guyger, 30, faces a murder charge in last September’s killing of Botham Jean inside his South Side Flats apartment. Her trial is scheduled for September.

Defense attorneys filed a lengthy change of venue motion Monday to get the case moved out of Dallas County.

The attorneys say the media coverage has been so pervasive that an average of one article a day has been published since the shooting.

“The case has been infamous and not merely notorious," they write in the motion.

Jean and Guyger lived on different floors at South Side Flats. Guyger says she parked on the wrong floor and accidentally went to Jean's apartment instead of her own the night of the shooting.

She said she believed Jean was an intruder when she walked in and shot him, court records show.

The shooting sparked outrage, and many activists and commentators believed Jean's slaying was racially-motivated.

Jean was black, and Guyger is white.

In their change of venue motion, defense attorneys Robert Rogers, Toby Shook and Michael Mowla include pages of links to online news articles about the shooting.

“Almost immediately after the incident, acting as an echo-chamber the size of the Grand Canyon, the media immediately began reverberating the false-narrative that merely because defendant is white and Mr. Jean was black, the incident must have been racial in nature,” the attorneys write.

Merritt, in a written statement, said the defense attorneys must do more than show there was a lot of news coverage about the case; they must also show the jury pool has been "tainted by misinformation."

He said what the public already knows is simple.

"A uninformed police officer entered the private apartment of a young accountant claiming to believe she was in her own apartment and shot him to death allegedly believing him to be an intruder," Merritt said. "This is not misinformation. The fact pattern alone does not create bias."

The motion asks District Judge Tammy Kemp, who is presiding over the case, to move Guyger’s trial to another county in the first administrative judicial region. Besides Dallas, the other counties in the region are Collin, Ellis, Fannin, Grayson, Kaufman and Rockwall.

If the judge rules against the motion, the judge’s decision cannot be appealed prior to the trial. If Guyger were to be convicted, her attorneys could then make the ruling part of the post-conviction appeal and claim that she did not get a fair trial in Dallas County.

Griggs tweeted that Jean “was killed under very suspicious circumstances. The DPD Officer should have already been arrested," the motion says.

The motion claims the former district attorney "poisoned the jury pool by appearing in public many times and commenting about the case.”

Johnson was running for election at the time of the shooting. The attorneys filed subpoenas last week for records related to Johnson’s election campaign brochures, radio talk show appearances and communications between Johnson and her campaign manager regarding Guyger’s case.

In the motion filed Monday, the defense attorneys make a point to note that they are not suggesting the current district attorney, John Creuzot, has behaved improperly in his handling of the case since taking office in January.

The defense attorneys write that Johnson's public statements on the case violated Guyger's rights to a fair trial and unbiased jury.

“Johnson materially interfered with this deeply rooted and fundamental right,” the attorneys allege.

The motion also points out a woman who says she's a witness in the case has raised more than $31,000 through GoFundMe.

The woman, Bunny Babbs, gave an interview in which she claims she received death threats after sharing video of the shooting aftermath.

The motion filed Monday says the woman claims there was "police intimidation" in the case despite no evidence of such.

Guyger, who was off duty at the time of the shooting, was still in uniform after working about 14 hours. She claims she parked on the wrong floor and had mistaken Jean for an intruder in her apartment. She fired twice, striking Jean once, police records show.

Guyger was arrested three days later on a manslaughter charge and indicted on a murder charge in November.

After shooting Jean, Guyger went into his apartment, called 911 and “provided first aid,” according to the arrest warrant affidavit.

Dallas police obtained a search warrant of Jean’s apartment as part of their initial investigation into the shooting. They found “two used packages of medical aid.” The records do not say whether Guyger or paramedics used the packages.

Officials have not clarified what type of medical assistance Guyger performed on Jean, and it’s unclear whether she performed CPR.

Guyger and Jean did not know each other, contrary to rumors that swirled on social media in the days after the off-duty cop shot Jean inside his apartment.

Police records show Guyger lived in the apartment beneath Jean's. She told police she accidentally parked on the fourth floor instead of the third floor, where her apartment was, on the night of the shooting, records show. 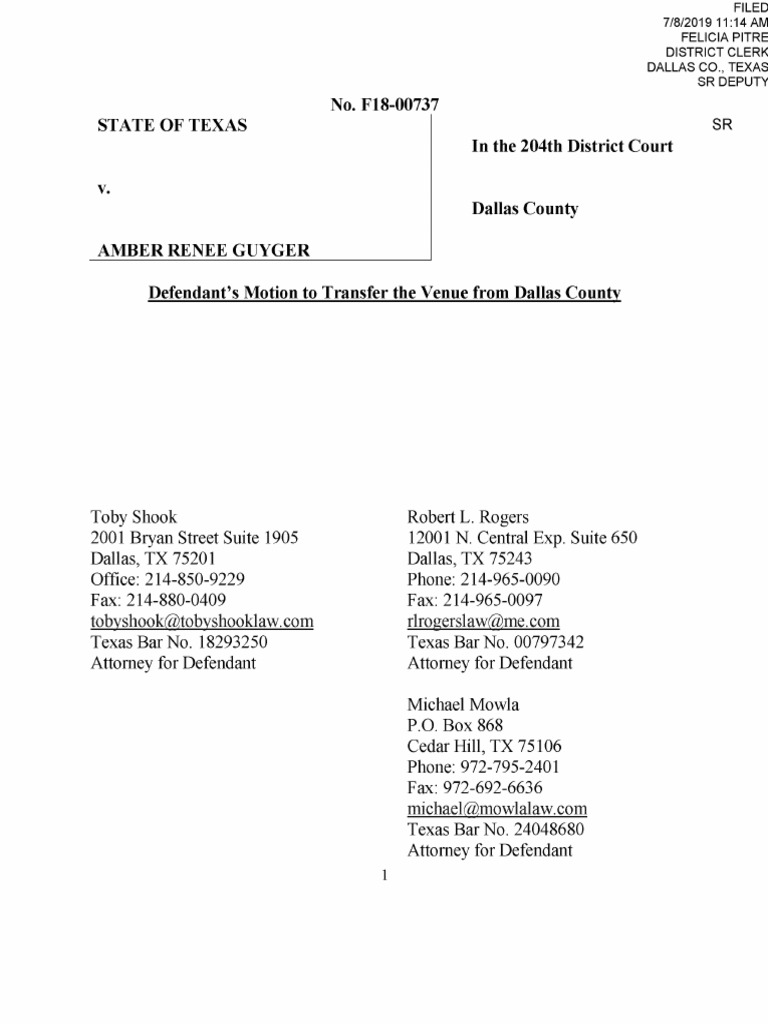