Where is Brian Laundrie? FBI looking into unconfirmed reports he was seen in Alabama

With speculation swirling online, local police say they forwarded tips to federal investigators to verify but nothing has been confirmed. 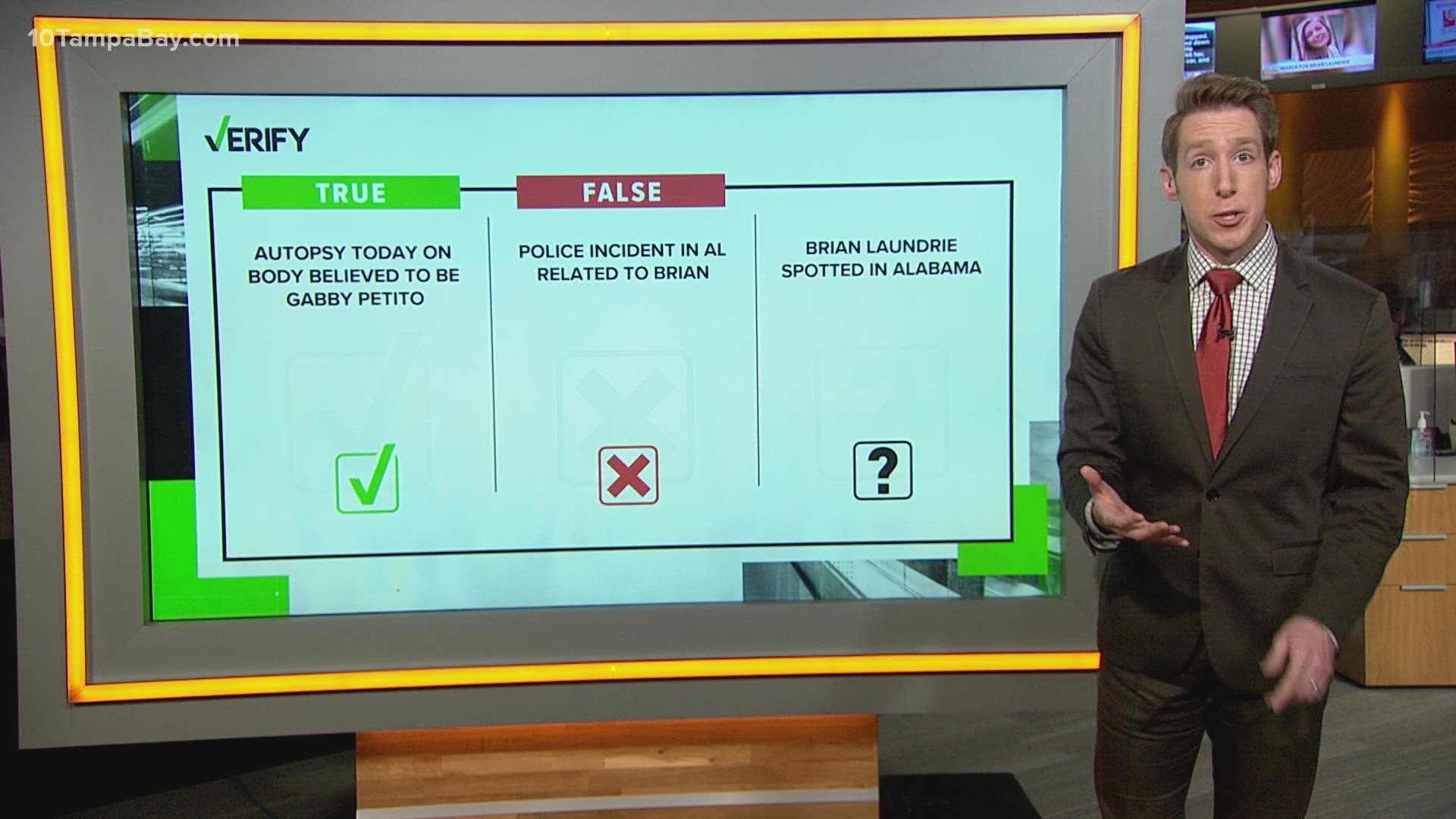 MOBILE, Ala. — UPDATE (Sept. 23, 2021): A federal arrest warrant was issued for Brian Laundrie following a grand jury indictment in connection with the Gabby Petito case. Click here for the latest information.

As the search continues for Brian Laundrie, authorities in Alabama say they’ve received reports he’s been sighted near Mobile.

Laundrie has been missing for days since he returned home from a cross-country road trip without his fiancée, Gabby Petito. He’s considered a person of interest in her disappearance.

Authorities on Sunday confirmed a body found in the section of Wyoming's Bridger-Teton National Forest matches the description of the 22-year-old Petito. An autopsy was conducted Tuesday.

The Teton County Coroner's Office's forensic examination determined the body belonged to Petito. Her death has been ruled a homicide.

As investigators searched Carlton Reserve in Sarasota County over the weekend—the last place detectives believed Laundrie had been—posts started circulating on social media claiming he was spotted more than 600 miles away, hitchhiking near a Walmart in Tillman’s Corner, Ala., which is just outside of Mobile.

Charlette Solis, a spokeswoman for the Mobile Police Department, told 10 Tampa Bay on Monday they received reports that someone who looked like Laundrie had been spotted in the area. That information, she said, has been sent to the FBI to verify.

The FBI has yet to confirm if any of the tips have been substantiated.

A large police presence near the same Walmart on Monday afternoon—which caused speculation to swirl again on social media about a possible connection to the case—was confirmed by police to be unrelated.

Solis told 10 Tampa Bay a body had been found near a dumpster behind the store, but it was not connected to Laundrie.

Laundrie has no known ties to the Mobile area.

To be clear, police have given zero indication this situation in Alabama right now has anything at all to do with #BrianLaundrie after what was an alleged -- and still *unconfirmed* -- sighting of him in this same area a few days ago. #GabbyPetito @10TampaBay https://t.co/cceOFwgZue

Investigators carried out a search warrant Monday at the Laundrie family home as work continues to figure out where he may be located. Law enforcement towed Laundrie's silver Ford Mustang from the driveway.