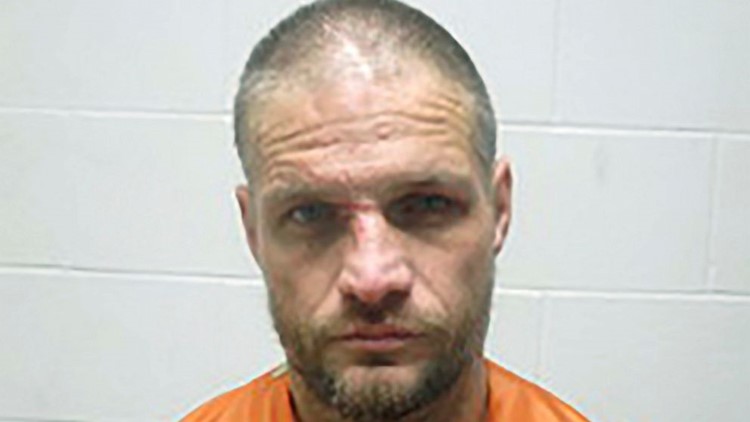 Photo by: Associated Press
Brandon Kirby was jailed on suspicion of kidnapping, pointing a firearm and being a felon in possession of a firearm.

SAND SPRINGS, Okla. — A man stole a pickup truck with a sleeping passenger and a goat inside and drove it all the way from Missouri to Oklahoma, police say.

The victim woke up to find a masked man with a gun pointed at his head.

During the 130-mile ordeal, the suspect took methamphetamine, pistol-whipped the victim and continually threatened him, according to the arrest report.

Police say Brandon Kirby, 40, eventually let the passenger and the goat out of the truck in rural Creek County, Oklahoma. The victim called 911, the Oklahoma Highway Patrol said.

Sand Springs Police tried to stop Kirby, but he kept going. OnStar slowed the truck to about 15 mph and deputies used a spike strip to flatten its tires.

Kirby tried to get out and run but olfficers found him hiding in some tall grass, KOTV reported.

“OK 2020, it only took you 4.5 hours to get weird,” the Sand Springs Police Department posted on Facebook. “Let’s slow down on the carjacking-goatnapping calls for the remainder of the year.”

Kirby was jailed on suspicion of kidnapping, pointing a firearm and being a felon in possession of a firearm.

According to an arrest report, the whole thing started early Wednesday when the victim and another man parked outside of an adult video store in Carthage, Missouri.

The driver went inside the store and the passenger fell asleep.

That’s when Kirby jumped into the pickup and took off, according to police.

Kirby was recently released from prison and has multiple convictions out of Creek, Osage and Okmulgee Counties, KOTV reported. The arrest report shows Kirby was wanted in Osage County for second-degree burglary.