As Chad Morris continues to be on the hot seat this season, Jim Harris looks at the potential rift between coach and players. 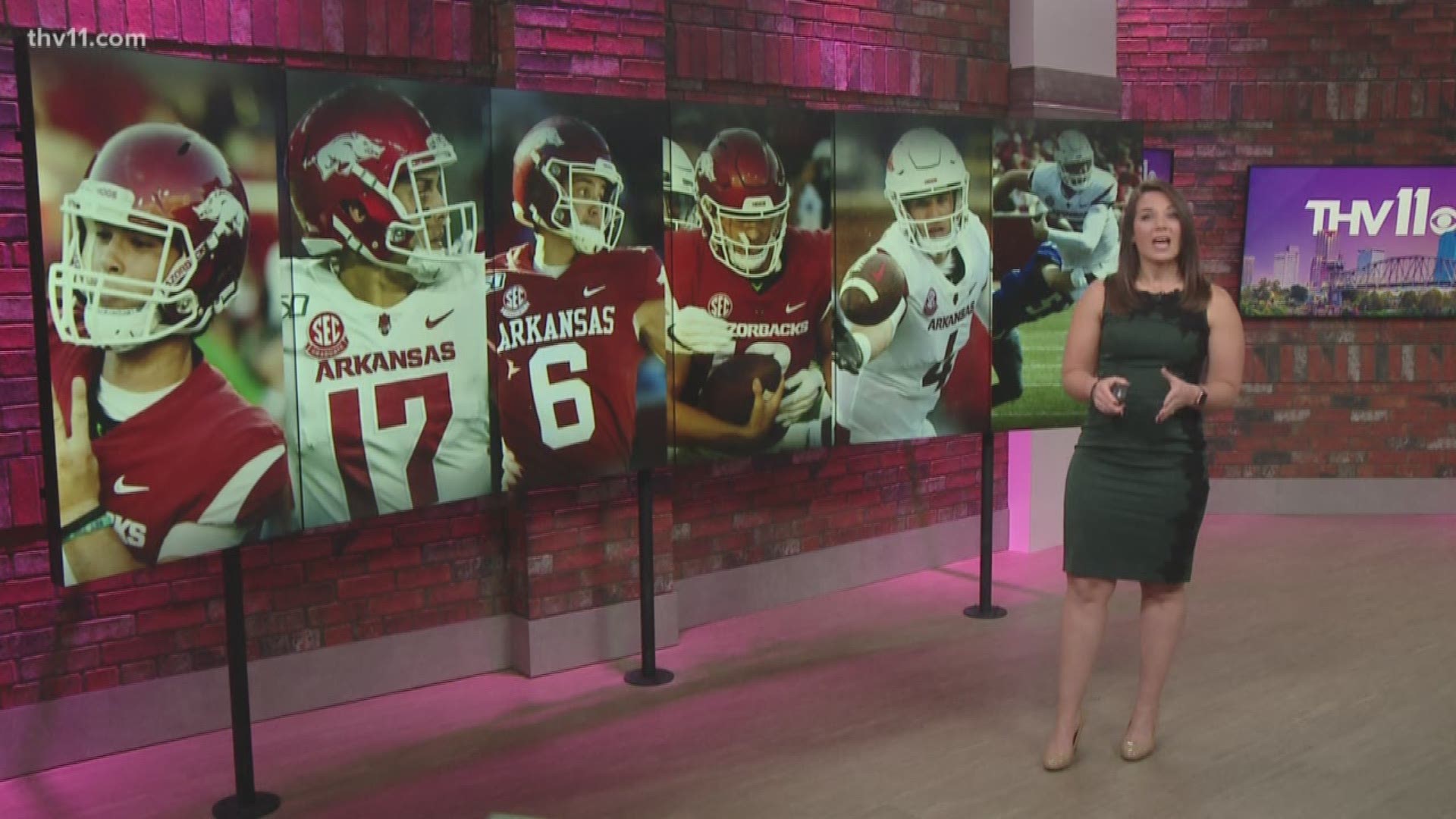 LITTLE ROCK, Ark. — Chad Morris, in his postmortem review of the destruction his Arkansas Razorbacks absorbed at the hands of Mississippi State last Saturday, sounded like he was reading off the note card from the Hogs’ shocking San Jose State loss back in September.

Nothing seen during an energetic week of practice had indicated that they’d get the lack of effort they saw during the game. Six weeks later, in what seemed like a winnable matchup, the Hogs fell to another struggling SWC West also-ran by the ridiculous score of 54-24. The defense, in particular, was a no-show.

Generally, you don’t lose to teams supposedly on the same standing in your conference by such margins unless a lot of your older players are going through the motions.

So it was that I asked senior defensive tackle Sosa Agim after Saturday’s game, noting what Morris had just said at the same platform a few minutes earlier, why it appeared they played with so little energy from the opening snap while Mississippi State rushed for 460 yards and compiled 640 total yards, a school record in a conference game.

Agim didn’t agree with the viewpoint. “I think we always come out with energy, even when it was Auburn or Alabama … it’s just that we fall behind and things don’t go our way ….” he said.

I guess he believes that. But, in my assessment and with watching as much SEC football as I do every season, Arkansas rarely has matched the level required in an SEC game since Morris arrived as coach, much less last week during homecoming at Fayetteville that, after a double-dose of beatdowns from the likes of Auburn and Alabama, looked like a reprieve.

Instead, it turned out just as bad.

It also looked more like the news that tight end C.J. O’Grady was suspended – and O’Grady cryptically tweeting that he had loved being a Razorback, leading his followers to surmise he had quit.

That would come Sunday by “mutual” decision with Morris, it turned out – had an effect on the minds of the players, particular guys like Agim, who surely didn’t play like the All-SEC defender he’s always been expected to be.

Then, when it was noted by a TV sports reporter in northwest Arkansas on Thursday that O’Grady’s photo was not included among the Hogs seniors, with senior day on Saturday vs. Western Kentucky, she wondered about the absence, and apparently so did some of his fellow seniors who either are still with the team or have medically retired. It was all odd, being as THE PLAYER HAS QUIT, whether by “mutual reasons” or not.

He’s not on the team now, and for whatever reason he put himself above the team first by doing something that go himself suspended, then finally – after numerous other run-ins with this and the previous coaching staff – being dismissed for good.

And, by the way, I’m assured by someone as close to the situation as possible that his suspension HAD NOTHING to do with some wildly speculated idea that O’Grady had questioned Morris about the team concerning his not playing freshman quarterback K.J. Jefferson. Absolutely not true.

Rather, the dramatic O’Grady, as talented as he can be on the field, been a problem at times under two staffs, and was again this summer in the run-up to the season. During the seasons, he’s been late for meetings and the like. It came to a head last week. Morris acted.

Now, it’s certainly fine for his former teammates to wish him well and even wish he were still part of Saturday’s senior day, but nobody needs to make it an issue that he’s not there now. It was ultimately his choice to play it his way, not Chad Morris.

Morris had no choice.

You don’t keep a problem child around forever or you lose everybody. Morris, contrary to the message boards and other social media, HAS NOT LOST EVERYBODY. There may be a few, though, that maybe never bought in still, and let go of the rope as if it’s greased, not caring where their drop might lead them.

What is concerning, however, is that some players – particularly those from out of state – are now concerned just how much of this crazed social media message of “Morris Must Go” is true. There are plenty of players still wanting to play for this staff. But it may be too much of a mental grind now with so much negative energy surrounding them.

As much as the coaches would love to say, “Turn off the social media, turn off Twitter,” that warning isn’t heeded these days.

If you look around social media, you’ll see observers who feel certain some Hogs (but most certainly not senior De’Jon Harris or freshman Treylon Burks, whose efforts top all these days) may lay down Saturday against Western Kentucky, which opened the season by losing at home to Central Arkansas.

Since then, Ty Storey, the graduate transfer from Arkansas, has taken over the quarterbacking and the Hilltoppers are 5-4 and eyeing bowl eligibility. They’re fresh off a loss to Florida Atlantic, even though Storey threw for 380 yards and three touchdowns. He also had four turnovers.

Nevertheless, with WKU he’s won games. At Arkansas, he was 0-9 as a starter who gave up his body time and time again to try to get that elusive SEC victory last year. He was literally knocked out of the game twice, once for good, against Ole Miss, leaving the contest when it appeared Arkansas was going to get that rare win over an SEC team. Without him and the top two running backs, out injured in the fourth quarter, it didn’t happen.

Morris said this week that the staff didn’t want Storey to leave. But, by heavily recruiting Clemson grad transfer Kelly Bryant, and then taking SMU grad transfer Ben Hicks when the Bryant recruitment failed, Morris didn’t exactly extend any vote of confidence for Storey, either.

He was headed out before spring practice, where nothing really looked much different about the Hogs’ offense with Hicks now in place.

We all know about the same back-and-forth quarterbacking the Razorbacks have endured this year. Hicks never had the team’s faith from game one – that was obvious.

But Morris apparently felt a heavy sense of loyalty to Hicks for the player transferring in despite dozens of reasons not too – the apparent lack of ability in the offensive line being foremost, and probably the chief reason that scared Bryant away.

Meanwhile, the team did seem to believe in Nick Starkel, the Texas A&M grad transfer, but then watched like the fans did in shock as he was rushed and hit hard, and imploded during the San Jose State game (5 interceptions), never to recover. Back came Hicks when Starkel was hurt versus Texas A&M.

Then back came Starkel against Alabama for a horrendous first half when Hicks was hurt against Auburn. Then, back last week came Hicks. Like the previous two weeks, Arkansas was down 17-0 before getting on the board and the defense had given up.

Between some misguided idea among a few older players that O’Grady wasn’t treated well, despite the constant insubordination, and with some players seemingly not happy that Hicks was foisted on them and continually played instead of the quarterbacks of the future, last week was viewed as being low as it can go for the Morris era.

It’s poetic, almost, where some deposed Shakespearean prince rides back in as a knight to thrust his deadly lance into the heart King Chadley, putting an end to this confused realm and ushering in a new day. One would have to think an already significant drop in season ticket sales would be pushed to unbearable depths for the program if Morris were retained after another 2-10 disaster, including two non-conference losses in probably the easiest schedule for a Hog coach since the program joined the SEC.

The one hope for Morris and the Razorbacks is that the Hogs appeared to get a lift from redshirt freshman John Stephens Jones, who played a little more than a quarter last week and led the team to a touchdown.

There was a noticeable surge not only among the team, but the remaining fans in Reynolds Razorback Stadium when true freshman K.J. Jefferson took over in the fourth quarter, immediately leading the Hogs on a 4-play, 75-yard scoring march started and capped by his two runs that totaled 26 yard, and also included a fantastic grab by Burks of a 32-yard Jefferson back-shoulder throw over a good MSU cornerback.

The team appears that it will play for these two quarterbacks.

Jones is a leader and was a two-time state championship winning quarterback in high school. He’s short and he’s not fast, although he’s counted on to run the read-option. Jefferson looks more like the proto-type Clemson quarterbacks of recent year, 6'3" and with a strong arm and the ability to run over folks while reading the option.

Both fit what Morris has said all along is his penchant on offense. Yet we were force fed two drop-back guys this year, on top of one last year who transferred and another who probably could have operated Morris’ offense better had the coaching staff only realized it when they arrived.

And that would be the guy playing Saturday for Western Kentucky.