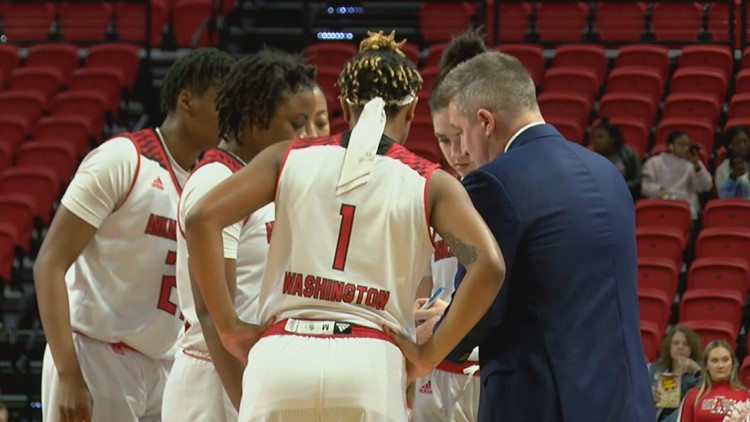 LAFAYETTE, La. — On Thursday night at the Cajundome, Arkansas State dropped an 83-43 decision at Louisiana in Sun Belt Conference action.

As a team, A-State shot 37.5 percent from the floor (15-of-40) and went 11-of-19 at the free-throw line (57.9 percent). Louisiana out-rebounded the Red Wolves 33-23, while forcing 20 turnovers. Wallace led the Scarlet and Black with a game-high six boards while Washington dished three assists.

Three players scored in double digits for the Ragin’ Cajuns, led by Makayia Hallmon’s 12 points off the bench. Brandi Williams and Diamond Morrison added 11 points apiece, with Morrison’s coming in 19 minutes off the bench.

A-State struck first on a pair of free throws by Wallace before the Cajuns scored seven unanswered to lead 7-2 at the media timeout with 4:57 to go in the first quarter. Louisiana tacked on another bucket before Shameka Tubbs broke the scoreless drought with a layup to make it 9-4. Andrea Cournoyer knocked down a corner three to push the lead back out to 12-4. A layup by Cournoyer made it a 10-point deficit before Maggie Mahan drained a trey to make it 14-7.

The Ragin’ Cajuns then went on a 5-0 run to stretch their lead out to 12 at 19-7 with under two minutes to go in the quarter before the Red Wolves trimmed it to an eight-point game after the first quarter, with Louisiana leading 20-12.

The Red Wolves picked up the pace offensively to start the second quarter, cutting the deficit in half at 20-16. Louisiana then found some rhythm en route to a 9-0 run to expand the lead out to 29-16. A-State managed three more buckets – two by Wallace and a three by Jada Ford – down the stretch as Louisiana closed the half with a 44-25 lead.

A Mya Love jumper at the 8:03 mark gave A-State its first score of the second half, as Louisiana continued to expand its lead. After Peyton Martin punched in a layup off the glass, Jomyra Mathis knocked down a midrange jumper to make it 50-29. The Ragin’ Cajuns then went on a 13-3 run after a pair of free throws by Washington to lead 63-34 at the 3:01 mark.

After Trinitee Jackson connected on a free throw, Louisiana scored six straight to end the third with a 69-35 lead.

Kayla Williams knocked down a jumper in the paint to record the first points of the fourth quarter in which the Ragin’ Cajuns outscored A-State 14-8. In the quarter, Jackson posted a field goal while Mahan added a bucket to match her career-best with five points. Starr Taylor rounded out the scoring for the Red Wolves with a pair of late free throws.

Arkansas State returns to action at 4 p.m. CT on Saturday, Jan. 25, hosting Coastal Carolina at First National Bank Arena. The contest against the Chanticleers will be aired live on ESPN+ while the broadcast can be heard on the EAB Red Wolves Radio Network on 95.3 The Ticket.