Wade was a two-year starter at Wichita State and appeared in 52 games with 47 starts for the Shockers, averaging 7.1 points and 5.5 rebounds for his career 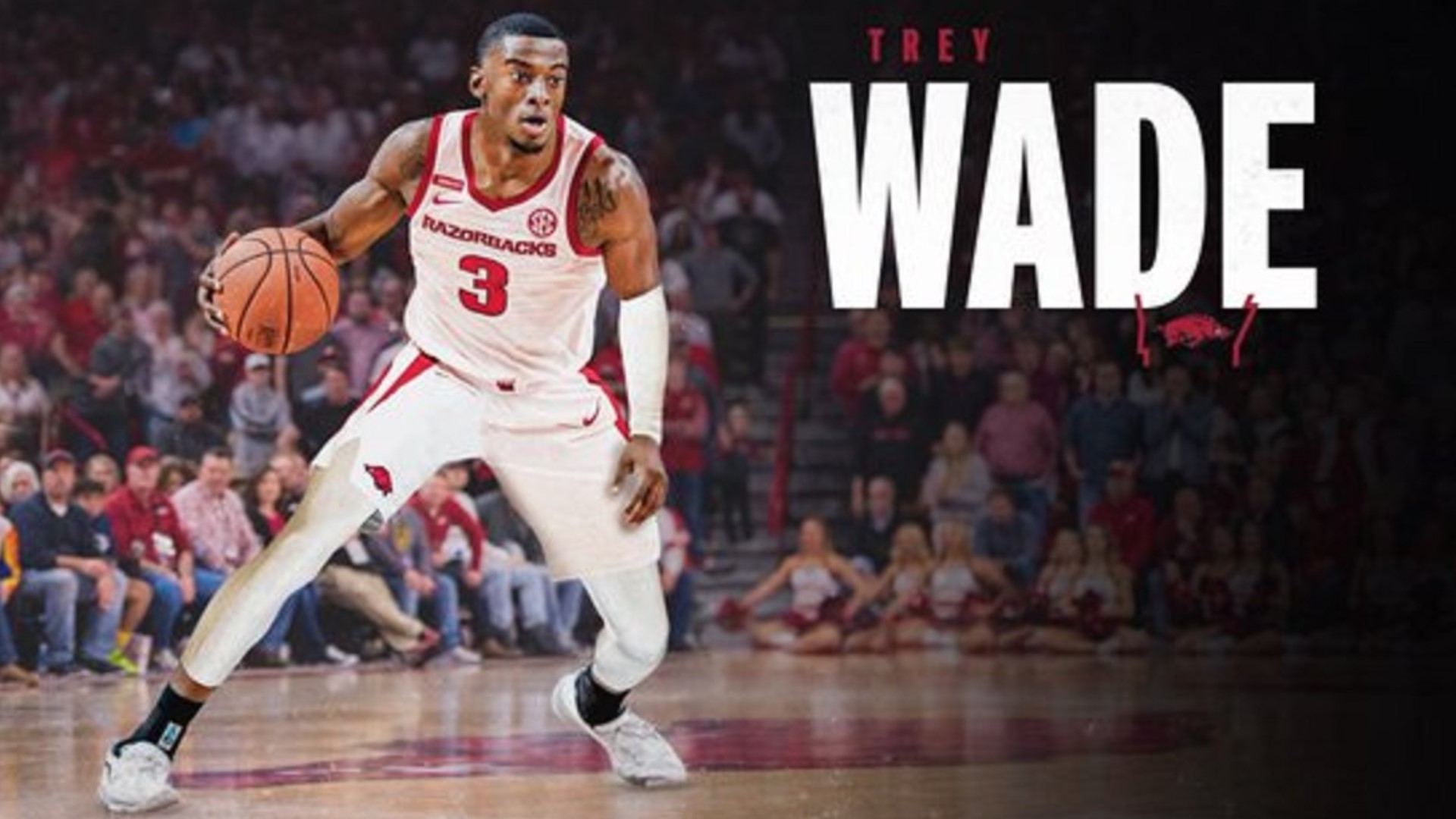 FAYETTEVILLE, Arkansas — University of Arkansas head coach Eric Musselman announced the addition of 6-6 forward Trey Wade as a graduate transfer to the men’s basketball squad for the 2021-22 season.

Wade was a two-year starter at Wichita State after playing a season-each at UTEP and South Plains (Texas) Junior College. He appeared in 52 games with 47 starts for the Shockers and averaged 7.1 points and 5.5 rebounds for his career. Last season, Wade averaged 6.8 points and a team-high 5.6 rebounds for WSU’s 2020-21 American Athletic Conference Championship squad that earned an at-large bid to the NCAA tournament.

“We’re very excited to welcome Trey Wade for the Arkansas Razorbacks,” Musselman said. “He brings a tremendous amount of experience, he has played in the NCAA postseason and he is very versatile. He plays extremely hard on both ends of the floor and will be an excellent addition to the program.”

Played in all 22 games and started all but one … Averaged 6.8 points and a team-best 5.5 rebounds in 26.0 minutes-per-game to help the Shockers earn an at-large berth to the NCAA Tournament … His 1.8 offensive rebounds-per-game ranked eighth on the conference leaderboard ... Shot 40 percent from the field, including 18-of-60 from 3-point range (.300) … Committed just 18 turnovers while totaling 33 assists, 13 blocks and 10 steals … Made his NCAA tournament debut against Drake (Mar. 18) and tallied five points, seven rebounds, two blocks and a steal in 27 minutes … Erupted for a career-high 23 points on 4-of-5 three-point shooting to key a win at Tulane (Mar. 5) … Scored in double-figures on two other occasions, including a 12-point, two-block effort against Temple (Feb. 7) … Also scored 11 points and grabbed seven rebounds to help the Shockers win their conference opener at Tulsa (Dec. 15) … Tallied seven points and matched his career-high with five assists in 24 turnover-free minutes to key an overtime win over UCF (Jan. 30) … Gave WSU the lead for good with a 3-pointer at the 2:59-mark in an 83-79 win at Ole Miss (Jan. 2) and finished with nine points, a season-high 10 rebounds and five assists … Made the Fall 2020 Athletic Director’s Honor Roll (semester GPA of 3.0 or higher).

Appeared in all 31 games and made a team-high 27 starts … Averaged 7.4 points and 5.4 rebounds In 23.7 minutes and totaled 13 blocks and 21 steals … Snagged a team-best 62 offensive rebounds … Was the team’s leading rebounder on nine occasions … Nailed 22 threes on 32.4 percent accuracy … Four-time winner of Gregg Marshall’s “Junk Yard Dog” Award ... Tallied two double-doubles … In his debut with the Shockers, scored 19 points and grabbed 11 rebounds versus Omaha … Was the first WSU newcomer in 20 years to debut with a double-double … Followed that with a 10-rebounds performance versus Texas Southern … His second double-double came in a win versus Oklahoma and included a career-high 15 rebounds (10 offensive) with 11 points … Scored a season-high 21 points on 8-of-9 shooting (4-for-5 3PT) versus Temple (Feb. 27) … He made all seven shots in an 18-point first half … Contributed six points and five rebounds in a key conference win over No. 21 Memphis (Jan. 9) … Tallied 11 points, six rebounds and four assists in a Cancun Challenge semifinal win over South Carolina (Nov. 26) … Dunked twice and shared the team-scoring lead with 14 points in a 68-59 win over ORU (Nov. 23) … Named to the AAC All-Academic Team (3.00+ GPA during the 2019-20 school year).

An all-region and all-conference performer for South Plains (Texas) Junior College … Rated the No. 23 junior college recruit in the class of 2019 by jucorecruiting.com … Helped the Texans (29-9) to a No. 2 national ranking, the Region V title and a semifinal appearance at the 2019 NJCAA National Tournament … Tallied 22 points, seven rebounds and six assists in a quarterfinal win over Trinity Valley CC … Started 34 games and averaged 13.4 points, 6.9 rebounds in 23.3 minutes-per-game while competing in one of the nation’s toughest JUCO conferences … Shot 51.5 percent from the field.

Sat out the season … Practiced with the team but did not see game action.

Averaged 19.1 points, 7.5 rebounds and 2.2 blocks in 2015-16 as a senior at South Cobb High School in Austell, Ga. ... Garnered first team all-region honors ... Three-year varsity letterwinner ... Member of a Class 6A Elite Eight team in back-to-back years as a sophomore and junior ... Prep single-game bests were 43 points and 10 rebounds.