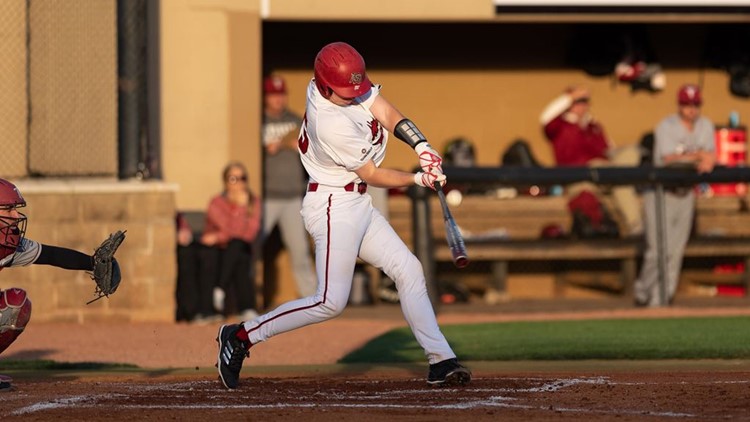 Tyler Duncan led A-State (0-1) with two of the Red Wolves' four hits on the afternoon, while SFA (1-0) got a solid 3.0 innings of relief out of Jaxon Covington, who picked up the win. Jack Jumper took the loss on the day, pitching 2.0 innings in which he allowed two hits, one earned run but struck out three Lumberjack hitters.

The Red Wolves struck first in the bottom of the first on the first of three errors by SFA, when Liam Hicks, who reached base on a walk, advanced to second on another walk by starter Angelo Gennari and then reached third on a passed ball. SFA catcher Skylar Black's throw sailed high and that allowed Hicks to plate the first run of the 2020 campaign and give A-State an early 1-0 lead.

In the second, facing an 0-2 count, Duncan belted a no-doubt homer to right field over the scoreboard, which gave the Red Wolf starter Zech Jarrard (4.1 IP, 6 H, 2 R (earned), 4 K, 1 BB) a 2-0 lead to work with. That would ultimately be last run scored by A-State, which stranded nine runners in the ballgame, including three in the second.

Will Nash tossed 1.2 shutout innings in relief of Jarrard before giving way to Jumper. Kollin Stone closed out the contest for the Scarlet and Black, pitching the top of the ninth and striking out a batter.

A-State returns to The Tom at 2 p.m. Saturday afternoon for game two of the three-game series. The radio broadcast of the game can be heard on M Newstalk 101.3 FM and KBTM AM 1230.