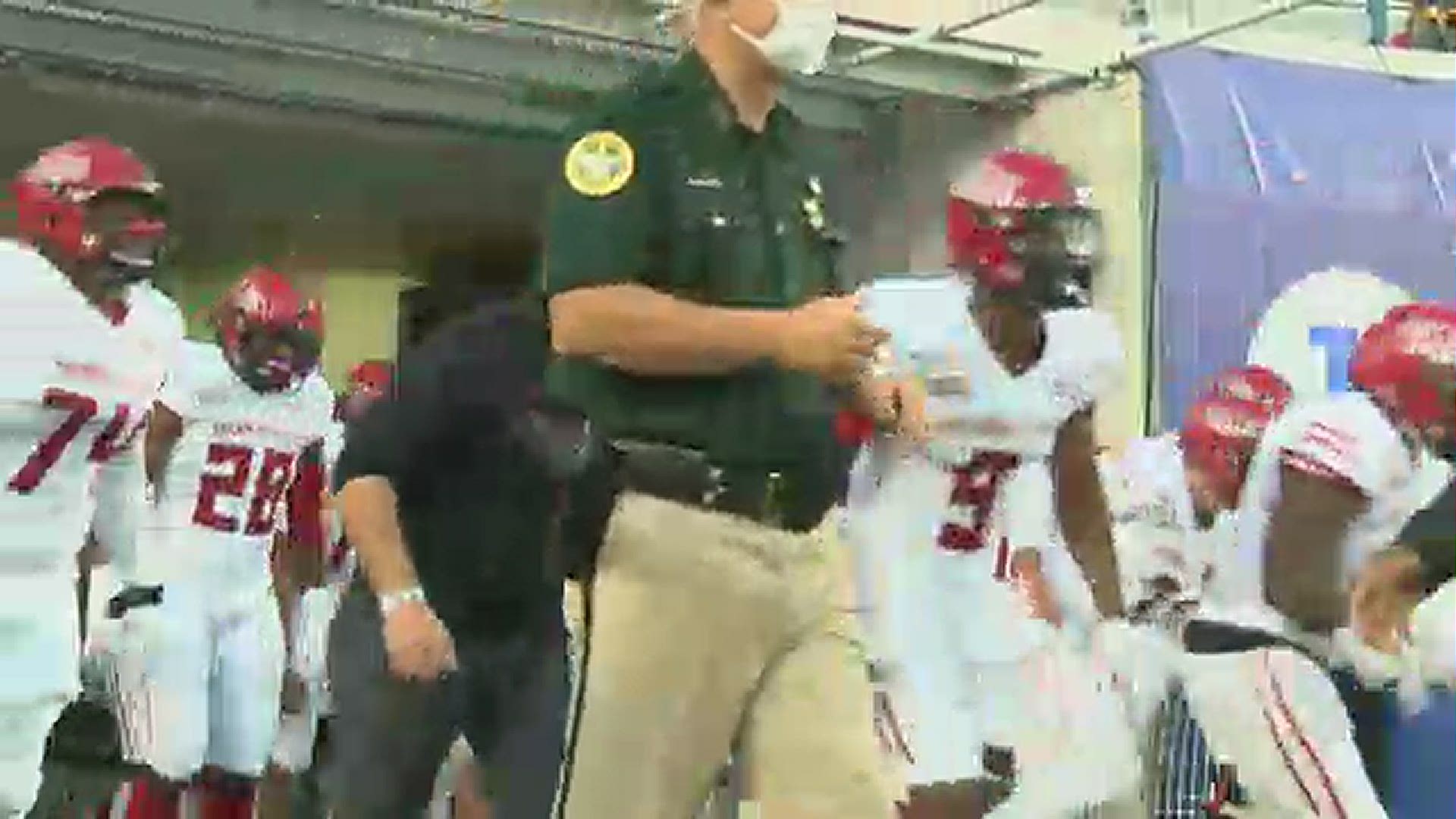 A one-score contest through two and a half quarters, Memphis (1-0) scored twice in the third to pull away for a three-score lead, although A-State (0-1) made a late push to cut it to 13 with under five minutes to go.

"We had a few opportunities to make it interesting and just missed those really good chances – we had an opportunity to tie it up and we let them off the hook a couple of times," head coach Blake Anderson said. "We really did not tackle well at all and have to do a better job of wrapping up. There were some miscommunications defensively, which we thought could be a concern with as many new bodies as we have there. Offensively, we didn't match up great against how big they were up front."

The Red Wolves tallied 424 yards on offense, with 299 coming in the passing game in a combined performance from Logan Bonner (14-of-23, 133 yards and one touchdown) and Layne Hatcher (13-of-20, 166 yards). Dahu Green hauled in five passes for a career-high 99 yards to lead A-State receivers. Jamal Jones led all A-State rushers with 64 yards on 15 carries. Lincoln Pare also racked up 33 yards on just five carries in his collegiate debut.

Memphis racked up 502 yards of total offense, including 275 through the air from Brady White, who completed 26 of 36 passes and tossed four touchdowns. Rodrigues Clark was the game's leading rusher, churning out 105 yards on 20 carries with a score.

Defensively, A-State was led by Jarius Reimonenq, who posted a career-best night with 11 tackles (2 for loss). The A-State defense also recorded at least 5.0 tackles for loss for the 49th time over the last 56 games. Memphis was led by Quindell Johnson's eight tackles, while Xavier Cullens and Sylvonta Oliver each grabbed an interception.

In the game's opening possession, Bonner led the Red Wolves on a 12-play, 75-yard drive that set up a one-yard score by Ryan Graham. The Tigers then responded with a 12-play drive on their first possession, with White finding Sean Dykes from 12 yards out. Dykes was the game's top receiver, hauling in 10 passes for 137 yards and a pair of touchdowns on the night.

A-State then took a 14-7 lead late in the first, when Isaiah Azubuike scored his first career touchdown on a one-yard score to cap off an 84-yard drive. Memphis evened things up on the ensuing drive when Clark scampered 14 yards for the score.

The Tigers scored again with 24 seconds left in the first half when White connected with Calvin Austin for a nine-yard touchdown pass in the corner of the end zone. That play capped off a nine-play, 80-yard drive that took under two minutes to set up the go-ahead score and gave Memphis a 21-14 halftime lead.

On the third play of the second half, Detravion Green picked off a White pass to give A-State prime field position inside the Memphis 30. That set up a 28-yard field goal by Blake Grupe to cut the deficit to 21-17 with 11:05 left in the third.

Memphis then took advantage of a short field on an A-State onside kick attempt, with White tossing an eight-yard strike to Damonte Coxie to make it 27-17. On A-State's next possession, the Tigers recovered a fumble near midfield and scored six plays later when White found Dykes for a seven-yard score to make it a 34-17 Memphis advantage going into the fourth quarter.

The Tigers added three more to open the fourth with a 26-yard field goal by Riley Patterson to make it 37-17 with 11:43 to go. A-State broke the scoring drought with a 12-play, 84-yard drive capped off by a one-yard strike from Bonner to TW Ayers with 7:42 to go to make it 37-24. That score was the first of Ayers' career, while also being the first catch of his career.

"I felt like we could've made it a game in the second half, there was just no momentum going our way and they controlled the clock and the line of scrimmage," Anderson said. "I'd have liked to see us score right there at the end and put the onside team out there and see what happens. This week is going to be big for us. We have to get better. I thought we played hard, you just didn't see that huge burst we've seen in the past. Memphis is a good team and they hardly made any mistakes all night."

A-State returns to action Sept. 12, traveling to Manhattan, Kansas, to take on Big 12 foe Kansas State. Kickoff from Bill Snyder Family Stadium is slated for 2:30 p.m. CT with the game being broadcast live on FS1.