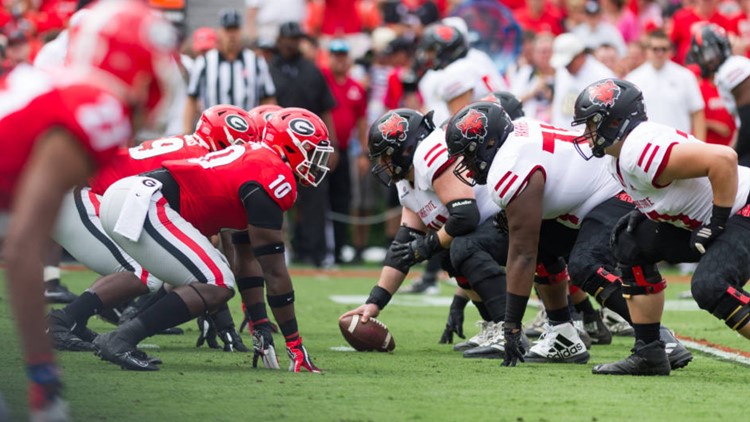 Arkansas State falls to No. 3 Georgia

The Arkansas State football team (1-2) fell into a 34-0 halftime deficit before eventually dropping a 55-0 contest to No. 3 Georgia (3-0) Saturday afternoon at Sanford Stadium.

Rowlett, Texas, native Logan Bonner was 20-of-35 passing for 124 yards, while junior Ryan Grahman had seven rushing attempts for a team-high 24 yards. Freshman Isaiah Azubuike, junior DJ Chatman and senior Jamal Jones also saw action in the backfield, but a strong Georgia defense limited the Red Wolves to just 43 yards on the ground.

Georgia held A-State to just 220 yards total offense as the Red Wolves were unable to put any points on the scoreboard for the first time since 2008 against No. 2 Alabama (35-0).

Georgia out-gained the Scarlet and Black 656-220 on the game, as the home team had 388 yards in the air with another 268 coming from the ground. Arkansas State had 177 passing yards and 43 rushing yards.

Junior Tahjea Chambers tied his career-high for tackles with 10, matching his total versus Appalachian State in 2018. B.J Edmonds and Darreon Jackson added eight tackles each while Antonio Fletcher followed with seven. As a defensive unit, the Red Wolves collected 67 total tackles, but only one tackle for loss.

Arkansas State will return home, after a two-week road stint, to close out non-conference play as it hosts Southern Illinois. Kickoff is set for 6 p.m. at Centennial Bank Stadium with the game airing on ESPN+,while live stats can be viewed at AStateStats.com.