Volunteers made 12-of-14 at the free throw line to pull out a 79-74 decision over Arkansas Wednesday night at Thompson-Boling Arena. 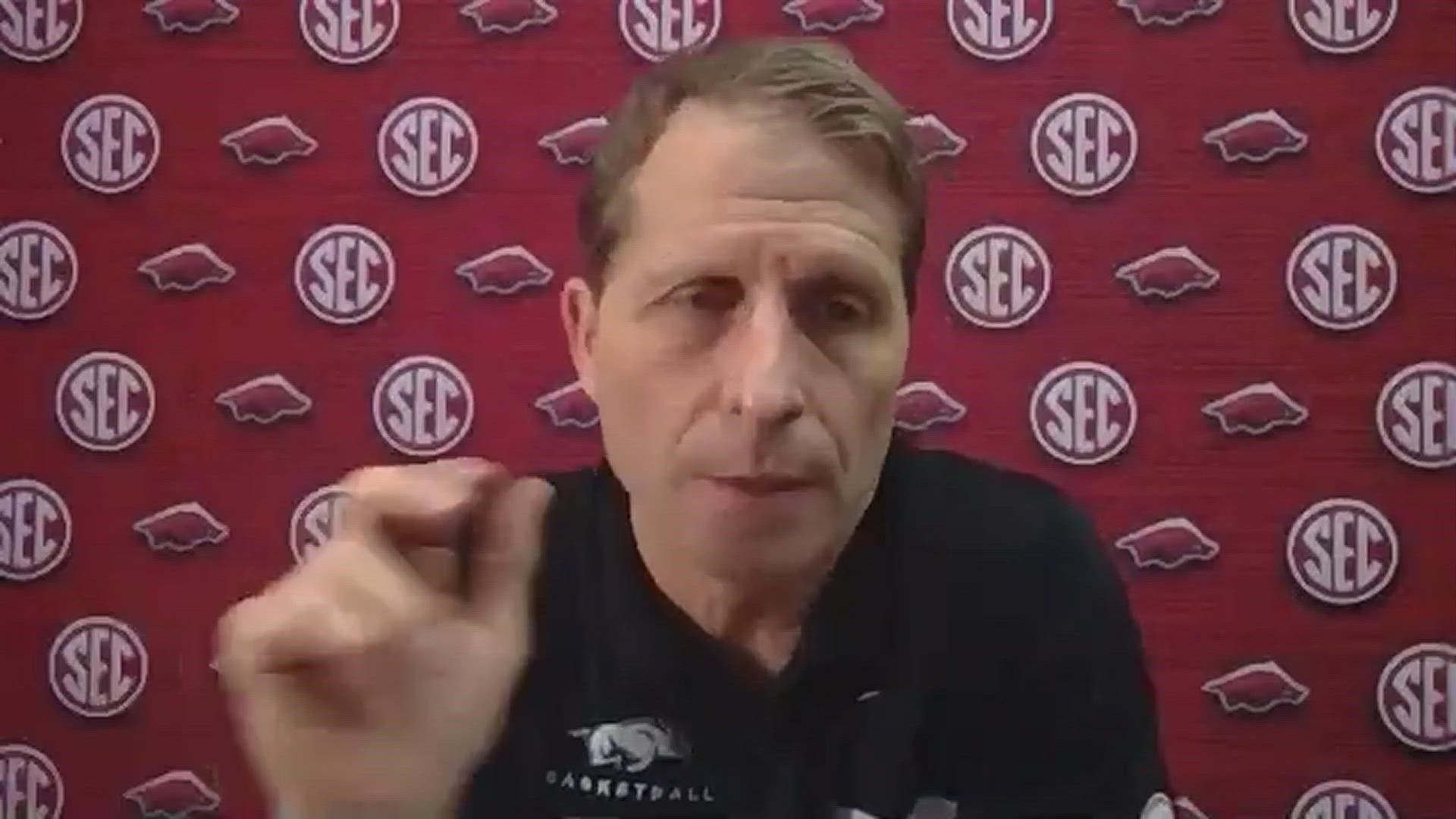 Tennessee, ranked ninth in the AP and eighth by the coaches, did not score a field goal the last 4:50 of the game, but the Volunteers made 12-of-14 at the free throw line to pull out a 79-74 decision over Arkansas Wednesday night at Thompson-Boling Arena.

We'll hear from Eric Musselman tonight at 10 on @THV11
📸University of Arkansas pic.twitter.com/ihiJ0P9Tqd

Arkansas only made 1-of- from the field midway through the second half and the Vols took its largest lead of eight points (69-61) with 3:56 left. JD Notae made back-to-back layups and Connor Vanover added a third to make the score 69-67 with 2:06 left.

Keon Johnson, who was just a 583% free throw shooter, made six straight free throws over the next minute-and-a-half for a four-point UT lead with 33 seconds left. Jalen Tate answered with a 3-pointer to cut the Razorback deficit to one, 75-74. After two Santiago Vescovi free throws, Tate had a great look from 3-point range, but the ball did not drop. Josiah-Jordan James pulled down the rebound, was fouled and made to free throws to put the game away.

Overall, Tennessee was 20-of-26 at the free throw line, compared to Arkansas being 8-of-10.

James and Victor Bailey Jr., each scored 17 for the Vols while John Fulkerson had 16 and Johnson 14.

Arkansas returns to Bud Walton Area to host Georgia on Saturday (Jan. 9). Tipoff is set for 2:30 pm and the game will be televised on SEC Network.

• Connor Vanover scored the first points of the game and the Razorbacks led 8-4 at the first media timeout (15:51).

• Tennessee tied the game at 13-13 before Jaylin Williams sank a jumper and Vance Jackson Jr., drained a 3-pointer in the corner. Arkansas led 18-13 at the second media timeout (11:21).

• Tennessee used an 8-2 run to take a brief 23-22 lead. Moses Moody answered immediately with a 3-pointer.

• JD Notae got a rebound with 3.2 seconds left and took it coast-to-coast to score as the buzzer sounded to end the first half.

• Tennessee kept it close as Arkansas committed 11 first-half turnovers while the Vols only committed two.

• Jackson and Connor Vanover (7 points) each had four rebounds.

• For the fourth time this season, Arkansas lost the opening tip.

• Vance Jackson was the first sub for Arkansas. It was Jackson’s second time to be first off the bench and first since game three versus UT Arlington.

• Moses Moody did not score in double figures for the first time in his career. However, he is the only Razorback to make a 3-pointer in all 11 games this season.

• Arkansas out-rebounded Tennessee, 37-28. The Vols were 9th in the NCAA in rebound margin entering the game.

• Arkansas scored 74 points – a season high against Tennessee. UT entered the game as the NCAA leader in scoring defense at 55 ppg.

• Arkansas shot 52.7 percent from the field – the team’s second-best percentage of the season. Tennessee was 10th in the NCAA in field goal percentage defense (37%).

• Arkansas committed a season-high 20 turnovers and forced a season-low five.

• JD Notae led the team in scoring for the third time this season.

• Vance Jackson Jr., just missed his ninth career double-double. His 14 points were the most since getting 15 in the season opener. His nine rebounds are a season high.

• Jaylin Williams was a perfect 3-of-3 from the field in his first collegiate start.

• Jalen Tate’s 15 points were his second-most of the season as were his six assists.