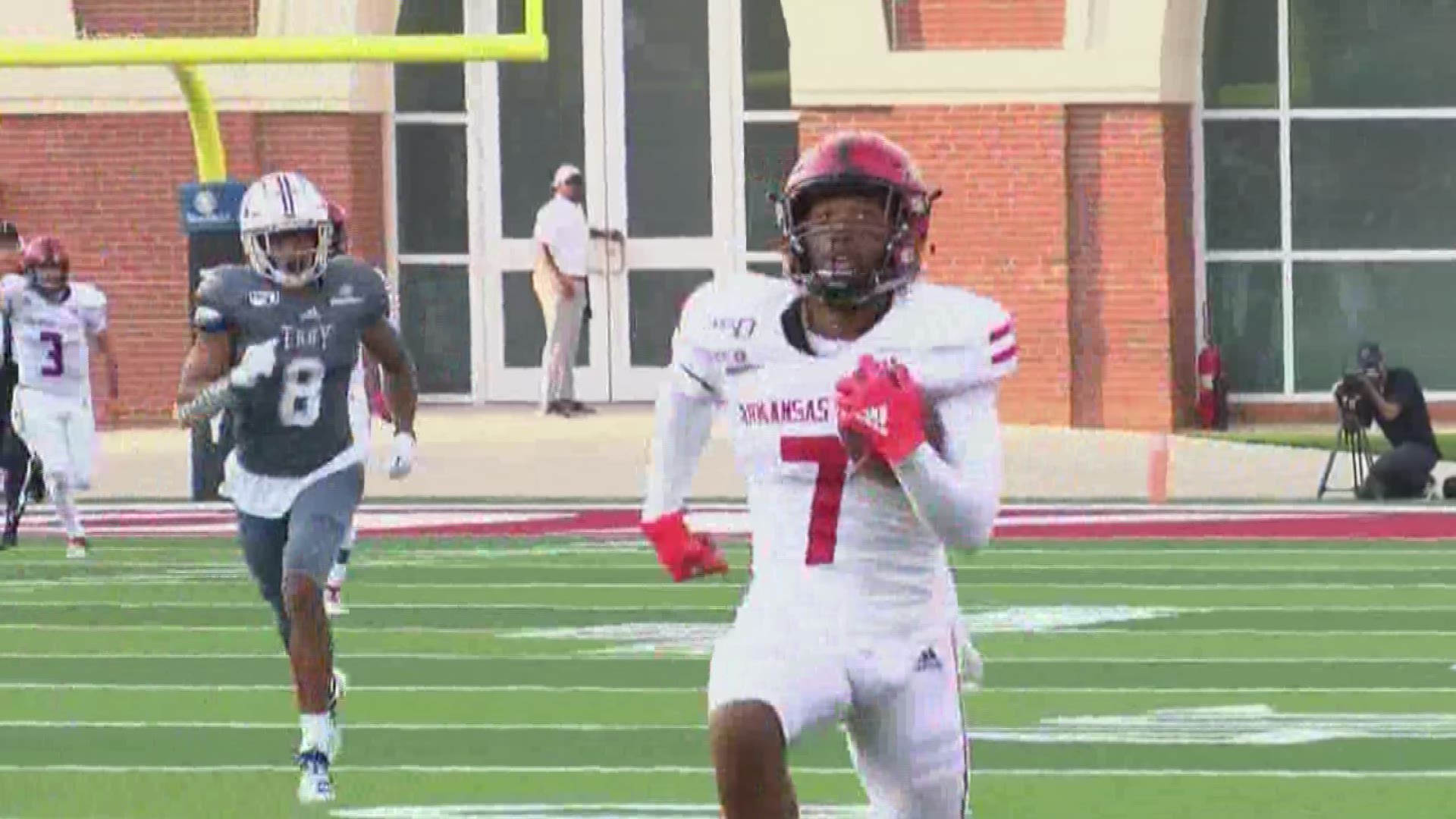 JONESBORO, Ark. — Arkansas State senior wide receiver Omar Bayless has been named the Sun Belt Conference Offensive Player of the Week, while senior punter Cody Grace was named the league’s Special Teams Player of the Week after their performances in the Red Wolves’ 50-43 victory at Troy this past Saturday.

Bayless became the fourth player in Arkansas State history to record over 200 receiving yards in a game by posting 10 receptions for a career-high 213 yards and a touchdown. He finished with the third most receiving yards in school history and the seventh most in the nation this season, while also tying the fifth most ever by a Sun Belt Conference player.

A-State’s first offensive play of the game saw Bayless come up with a 92-yard touchdown catch, which was the second longest reception in school history, third longest in the nation this season and tied the fourth longest every by a Sun Belt player. His 10 receptions tied his career high, and he is now ranked ninth in the nation in receptions with 7.2 per game. Bayless came up with his seventh touchdown of the season, giving him 16 for his career to tie the most in school history. He posted over 100 receiving yards for the fourth time in five games this year and leads the nation with 137.8 yards per game.

Bayless not only recorded a career-high 213 receiving yards, he came up with a crucial punt block late in the third quarter. With A-State leading just 38-37, Bayless came up with the Red Wolves’ first blocked kick this year to give A-State the ball on Troy’s 32-yard line. The very next play saw quarterback Layne Hatcher find wideout Jonathan Adams on a 32-yard touchdown pass to give A-State a 45-37 lead and the momentum with 1:52 left in the third quarter. The punt block was the first of Bayless’ career.

Grace not only averaged 49.4 yards per punt with three of his five attempts pinning Troy inside its own 20-yard line, he completed a 15-yard pass to junior receiver Brandon Bowling in the third quarter to convert a momentum-changing fake punt. Following a Troy field goal that gave the Trojans their first lead of the game at 34-31, the Red Wolves ensuing drive stalled at their own 44-yard line before Grace extended the drive on a key fourth-down play. The Red Wolves found the end zone just two plays later with 7:50 remaining in the third quarter, reclaiming a lead it wouldn’t relinquish for the remainder of the outing.

Grace punted five times with a long of 58 yards, and his 49.4 average per attempt nearly matched his career high of 50.0 recorded just the week prior. The Perth, Western Australia, native has now recorded multiple punts inside the opponents 20-yard line in 22 of 29 career games.

A-State returns to action for an SBC road matchup at Georgia State on Saturday, Oct. 5. Kickoff from Atlanta is set for 2:30 p.m. (CT) and the game will be aired on ESPN+.